Nicaragua Has a Cervical Cancer Problem. A Coffee Farm Is Trying to Help. 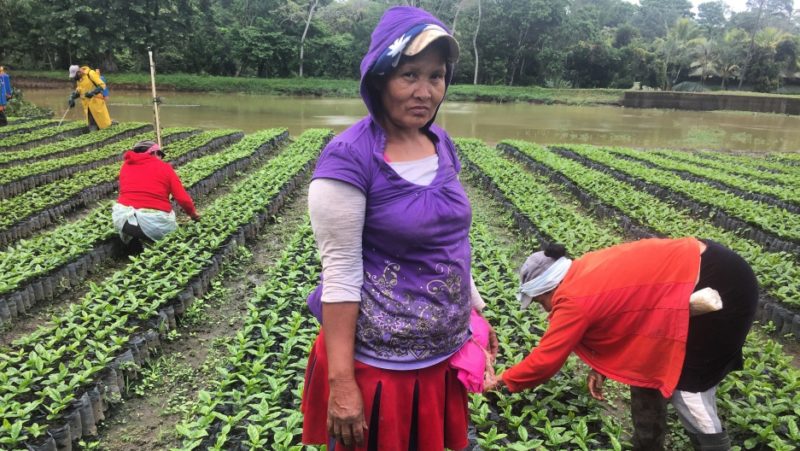 Maritza Blandón, a coffee grower in the mountains of Nicaragua, got her first pap smear at the age of 47. She tested posted for HPV and get treatment. Blandón is a single mother. If she died of cervical cancer, no one would be here to take care of her eight children. Credit: Shuka Kalantari/PRI

This article by Shuka Kalantari originally appeared on PRI.org on August 18, 2016. It is republished here as part of a content-sharing agreement.

Maritza Blandón is crouched over a row of young coffee plants at a farm in Matagalpa, in the Northern mountains of Nicaragua. She works with a handful of other female coffee farmers who live and work here with their children. Most of them are like Blandón: on their own with their children.

“I'm both mother and father to my children,” she says while carefully weeding the coffee plants.

Blandón had her eight children at home and had never been to a hospital before. Then a few months ago another coffee grower, a friend, was diagnosed with cervical cancer. It spread to her intestines. She died nine days before I met Blandón.

Nicaragua has one of the highest cervical cancer death rates in all the Americas. Women like Blandón, in rural areas, are most at risk of not getting medical care. 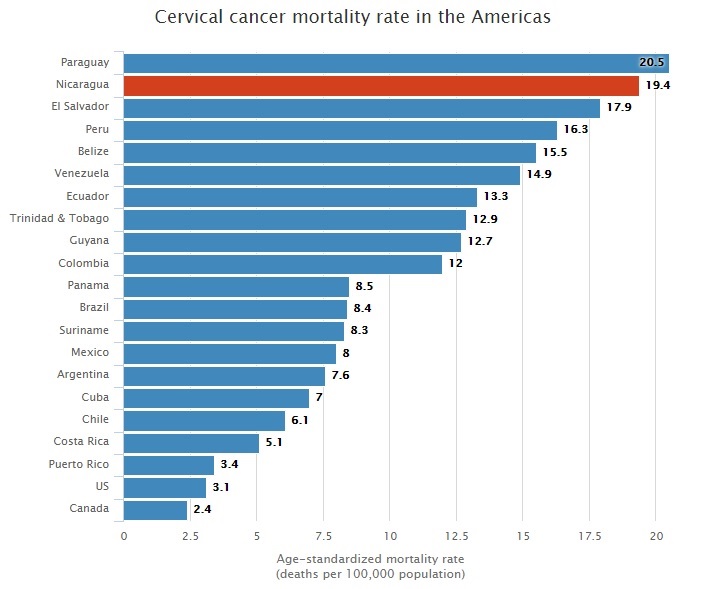 Country data from 2009 or latest year. Age-standarized mortality rate (ASMR) is a technique used to compare different populations when their age profiles are different. Source: WHO. Graph by Kuang Keng Kuek Ser for PRI. Click the image to visit the interactive graph on PRI.org

At 47 years old, Blandón went to a clinic and got a pap smear. It was the first time she has seen a doctor in her life. She tested positive for human papilloma virus, HPV — a major risk factor for cervical cancer. She got treated immediately, and now goes in for regular checkups. (Note: There is no formal HPV vaccination program in Nicaragua currently).

Blandón says she can afford to miss a day of work, but as a single mother, she can’t afford to die.

Her friend, Mely Montenegro, grows coffee with her. She insisted Blandón get a pap smear. She did it herself five years before and also had to be treated for HPV. Like her friend, it was Montenegro’s first time seeing a doctor. She was 28, a single mother of three.

“It was an embarrassing thought,” Montenegro says. “None of us wanted to see a gynecologist.”

Community health workers started visiting the farm and urging the women to go to the clinic and get exams. Montenegro didn’t like the health workers, and she wasn’t about to let them look at her vagina. But then she thought of her kids who live with her in a one-bedroom cabin on the farm.

“If I got an extreme case of cancer, where would my children go?” Montenegro says. “Who could I leave them with? So I made the decision to go to the clinic and get tested.”

More people in Nicaragua die from cervical cancer than any other cancer.

Marcela Cisne wants to change that. She’s with Fara Foundation, which owns the coffee farm, runs the health clinic and manages health workers. It’s crucial work, because most coffee growers here are women.

“We have to take care of women in the community because they’re the glue that keeps that whole family together,” Cisne says. “If a woman dies, they eat the chicken, they sell the pig, the house falls down, the crop dies because nobody waters it, and the husband goes and lives with somebody else. And the children go with the grandparents or the aunts or the neighbors. The whole community has collapsed. That’s why we want to keep that woman alive.”

Cisne says even when women in Nicaragua manage to get tested, they often never get results. Doctors don’t follow up, or patients have to head back into the mountains before results are ready.

But Cisne says the main culprit for the country’s high cervical cancer death rates is Nicaragua’s machismo culture. Men have multiple partners here, and they spread HPV. But these same men think it’s taboo for their women to go to a gynecologist. And there’s very low contraception use.

“When we offer free condoms we say, ‘You need to have protected sex.’ They say, ‘Oh no, no, my husband would kill me,’” Cisne says. “Then we have to explain to them, ‘Well he’s somehow killing you.’ We have to educate this woman.”

Back on the coffee farm Mely Montenegro, the woman who got tested and persuaded her friend to do so too, is on a mission to get her friends tested.

“I tell my friends to not be embarrassed by getting pap smears,” Montenegro says. “Because they’re nothing compared to cervical cancer.”

Montenegro says she’ll teach her own daughters to get screened for cervical cancer when the time comes. She’ll teach them there is nothing taboo about wanting to stay alive.