‘I Want to Appeal to the Doctor Within Assad': One Syrian Medic's Message After Visiting Aleppo 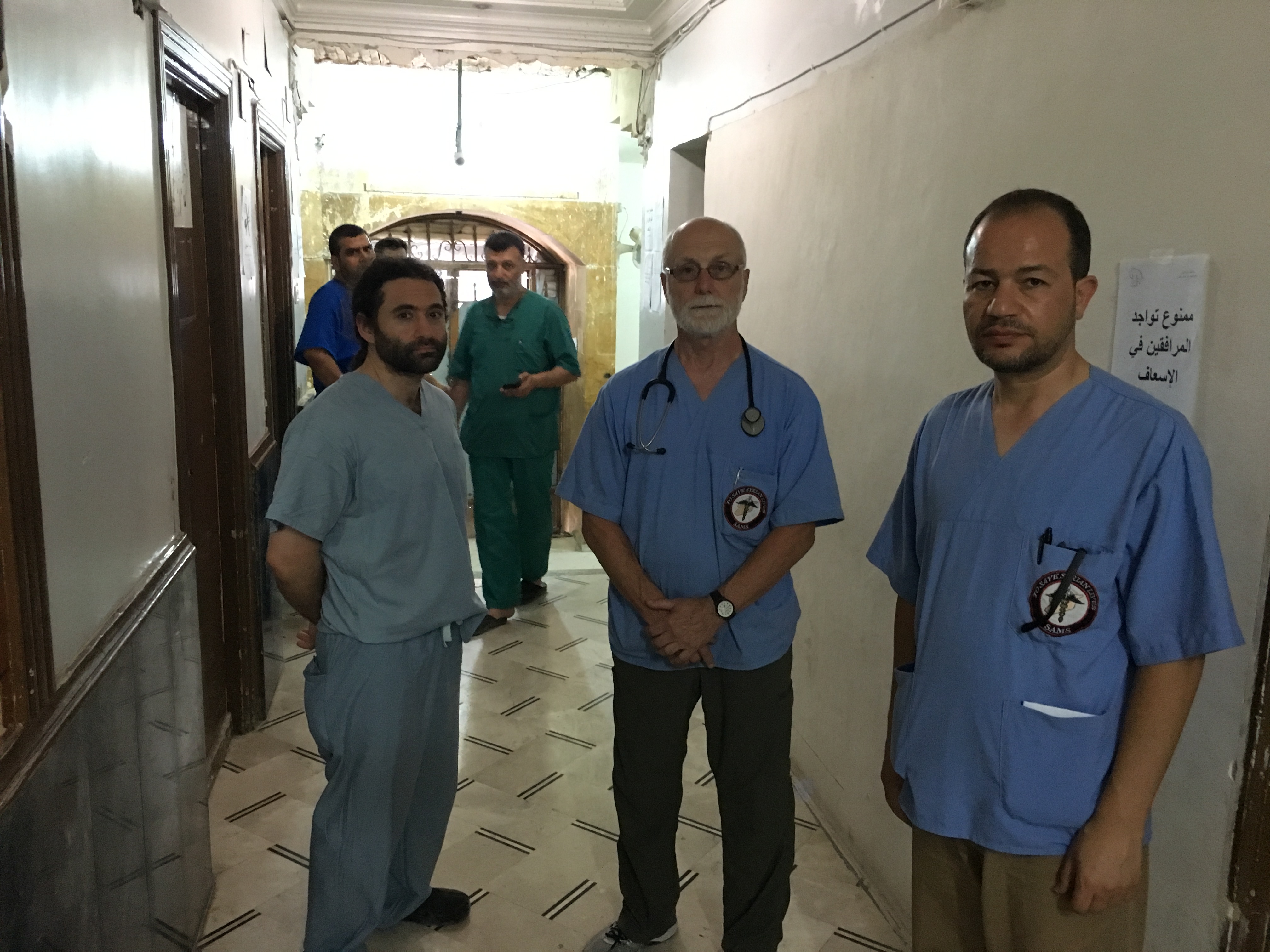 In 1988, Dr. Zaher Sahloul, founder of the American Relief Coalition for Syria and senior adviser and former president of the Syrian American Medical Society (SAMS), graduated from medical school. Among his classmates was a man who would later impact Syria's future more than any other person: Bashar Al Assad. In this exchange with Global Voices after his latest trip to now besieged and rebel-held Eastern Aleppo, Dr. Sahloul appeals to the “doctor within” Assad.

Dr. Sahloul recently gave a talk at the United Nations, in which he compared his visit to Aleppo with the account of a Soviet lieutenant general in the Red Army who witnessed the Siege of Stalingrad (1942-1943), describing it as “10 times worse than hell“.

As with his previous trips to the city, Dr. Sahloul came prepared. The driver, before speeding up, told him to “say your final prayer because the risk of death is very high in the next five kilometers”. Those five kilometers refer to Castello Road, “the only road leading to the northern and western countryside of Aleppo”, offering the sole path to the outside world via Turkey, and consequently, to food, medicine and other necessities used in Aleppo.

The following video was recorded by Dr. Sahloul:

This last mission was my fifth mission to Aleppo and things have gotten really worse since the previous one. When we went there, it was on June 27 and the road to Aleppo was semi-blocked. It was already very dangerous. There were five kilometers in which we were exposed to shelling from the regime side, snipers from the Kurdish side and also airstrikes which could be from the regime or from the Russian government.

The stretch, dubbed the ‘Road of Death‘ by an opposition activist, was surrounded by burnt cars and upside-down trucks and buses in which decomposing bodies were left to rot. 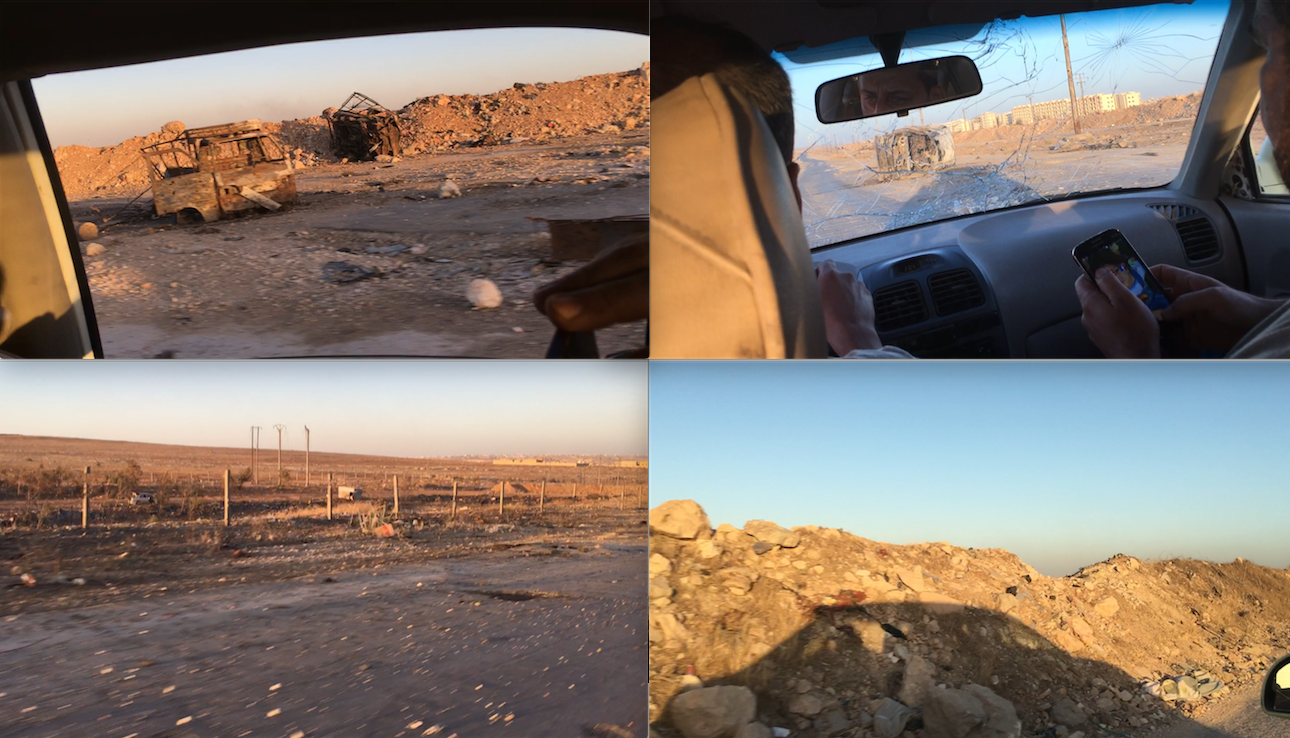 The Road to Aleppo, images taken by Dr. Zaher Sahloul on June 27, 2016 and used here with permission.

Once in Aleppo, Dr. Sahloul and his colleagues reached M10, an underground hospital that has been bombed 17 times by the Assad regime in the past four years. It is one of the few remaining hospitals in Eastern Aleppo.

The working conditions of Syrian doctors have regularly been cited as among the worst in the world, if not the worst. There are an estimated 35 doctors left in Eastern Aleppo which, with a population of approximately 300,000, means that there is currently one doctor for every 8,570 people. Fifteen of the 35 doctors recently penned an open letter to President Obama, in which they say that “a medical facility is attacked every 17 hours by the Russian-backed Syrian air force”. Meanwhile, Doctors Without Borders reported that at least 82 of its supported facilities have been targeted since January of 2015. All in all, at least 738 Syrian doctors, nurses and medical aides have died in more than 360 attacks on medical facilities since March 2011, according to Physicians for Human Rights (PHR).

Dr. Sahloul says the explosions can be heard throughout the day and night:

The hospital walls shake but people continue to work because they’ve gotten used to these sounds. The fact that [M10] is underground gives some level of protection and safety for the patients and the physicians. This is the largest trauma hospital in Eastern Aleppo.

You can hear the explosions in the following short video taken by Dr. Sahloul. According to a man whose voice can be heard in the recording, they were caused by a Scud missile. He says:

When the Russian government or the Syrian regime bomb these hospitals they do so with the intent of destroying the hospitals. They want to drive the doctors out so people can follow them. Because when there’s no doctors in town, when there’s no hospitals in town, people don’t stay.

According to Dr. Sahloul, of the 300,000 people living in Aleppo, 85,000 are children including about 20,000 below the age of two. One of these children is Ahmad Hijazi, just five years old. He was hit by one of Assad's barrel bombs and consequently, had a chest contusion and shrapnel lodged in his spinal cord. Unfortunately, Hijazi did not survive.

He was paralyzed from his neck down. When I saw him, he was breathing with great difficulty so we had to put a breathing tube into his mouth and put him on life support. He was between life and death when I was there and the day after I left, he had a cardiac arrest. He was five years old.

Barrel bomb victims are among the most common patients in the M10 underground hospital. Another victim, 25-year-old Fatima, was already the mother of three children and three months pregnant with her fourth when two barrel bombs were dropped on her house. Two of her children died. Abdo, nine years old and Ilaf, three, were pulled dead from under the rubble. Luckily, both Fatima, who had internal bleeding and was immediately put on life support, and her third child, Mahmoud, pulled through, but Fatima lost her unborn child. 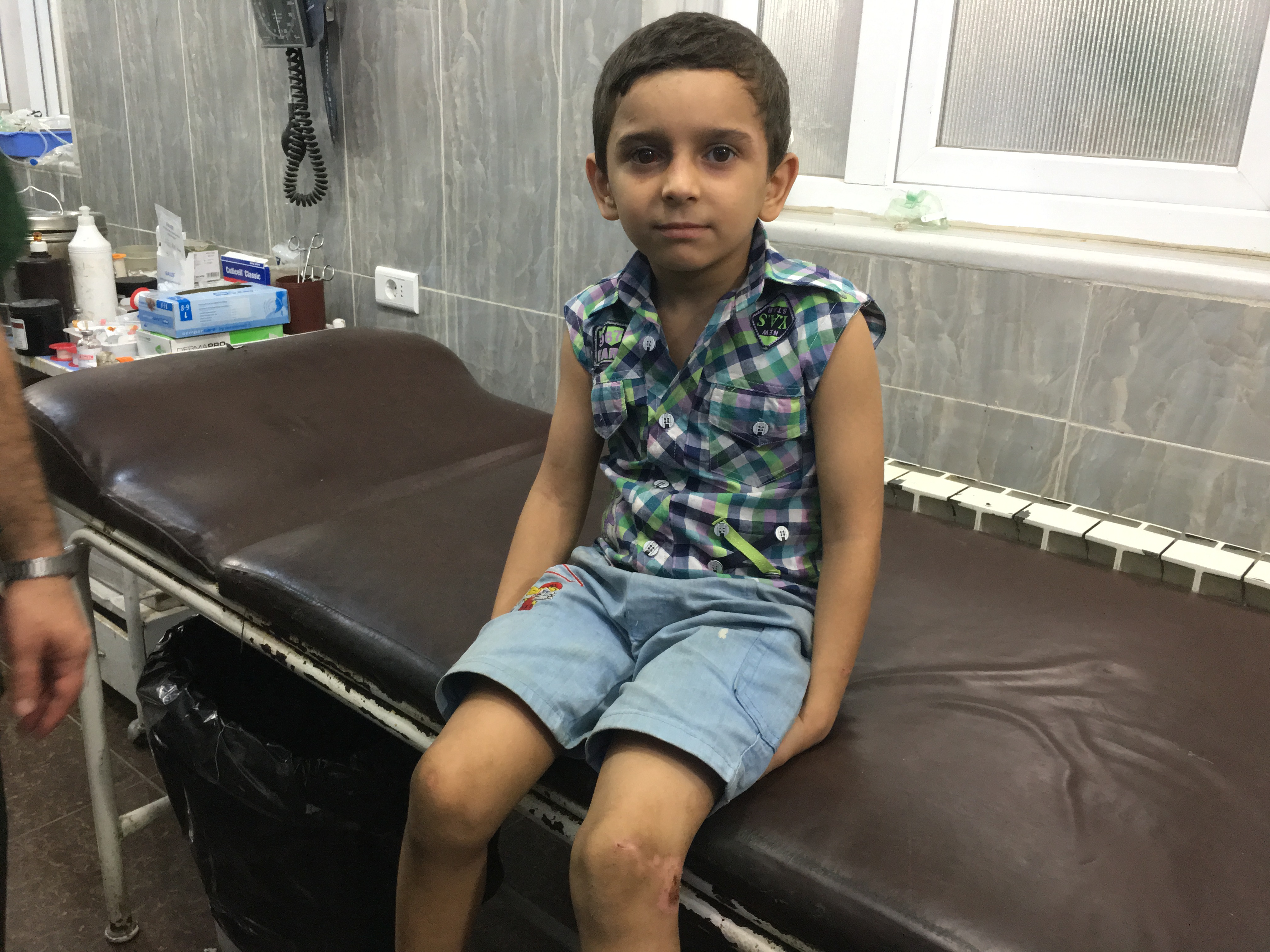 Dr. Sahloul recently told CNN's Hala Gorani that he wishes to appeal to the “doctor within [Assad]” to stop the barrel bombs. He explains further:

Who knows? We exhausted everything. I think the international community exhausted everything in terms of applying pressure on the Syrian regime. I don’t know if he does, but he probably knows that children are being killed and mutilated and hospitals are being targeted. I mean, he has children, he has a wife. He studied medicine. He was supposed to be an eye physician. In one of the meetings that we had with him, the first meeting after he became president, he told us that he would have preferred to be a physician rather than a president. I think we have to appeal to that side in him. I don’t know if it’ll work or not. Many Syrians gave up completely, especially after he oversaw the destruction of half the country. More than 470,000 people in Syria were killed. He caused this war. He could have done things early on in the crisis, like meet the demands of the population for reform like what has been done in other countries like Morocco and Jordan. Maybe it’s too late, but what else can we do?

He adds that he has seen Assad's power in practice:

When I came back from Chicago after the first meeting with him as president, people knew that I met with him. So the next year, I received an email from someone who asked if I can give a letter to the president and I said that I'll have to read it first, but yes. [It] was an appeal from a person whose father was a physician, a pediatric doctor, educated in the U.S. and then went to Syria in the late '80s and was imprisoned by the father of Bashar Al Assad, Hafez Al Assad. He had been in prison for 21 years, accused of supporting the opposition. So I told him that I’d try, but that I couldn’t promise him anything.

Luckily, we were invited to meet with the president in his presidential palace again. […] As I was leaving, I told him about the letter and he accepted to read it. And half an hour after we left, someone called me and he said, ‘Your friend is released’. So he released that physician after 21 years, after reading that letter.

This is just to say that he is in control and he is able to make these decisions quickly and people follow them. That physician was actually allowed to travel to the United States to see his wife who had terminal cancer. He stayed with her [for] two years before she died. And now he’s practicing medicine in Chicago.

The regime does that for people sometimes, especially when it’s someone you want to use as an ally. They do you a favor and then they expect you to stick with them. That’s the system in Syria and in other dictatorial countries. A president will do you a favor and I guess that President Assad thought this was a favor for me. It gives you an insight into how things work in Syria.

With regard to democracy in Syria, Dr. Sahloul says of Assad:

When I asked him about the question of democracy, he told me that Syrians are tribal, that there’s a lot of sectarianism, that they’re not educated civically, that they’re not able to make decisions on their own. He complained about parliament not enacting laws the way he expected them to, and how he has to do things on his own. And then he said – I don’t remember the words exactly – that Syrians are not ready for democracy. It has to be a very slow and gradual process and that was the first year after he became president. Twelve years after that, nothing happened.

As for President Obama, Dr. Sahloul met him in July 2013, one month before the regime's infamous Ghouta massacre, and told him that Syria will determine his legacy as president. This was the exchange:

I delivered a letter on behalf of SAMS. There was an Iftar at the White House at that time as it was Ramadan. I told him that in our letter we’re asking for a no-fly zone to protect hospitals and civilians, the things that we’re still asking for right now. Nothing has changed. I told him, ‘I think that your legacy will depend on what you do or you don’t do in Syria.’ So he paid more attention. And then he laughed and said that his legacy will be determined by other things, to which I replied, ‘But I think Syria will be the main factor.’ And he said, ‘I’ll get back to you.’ But he never got back to me. He never responded to the letter.