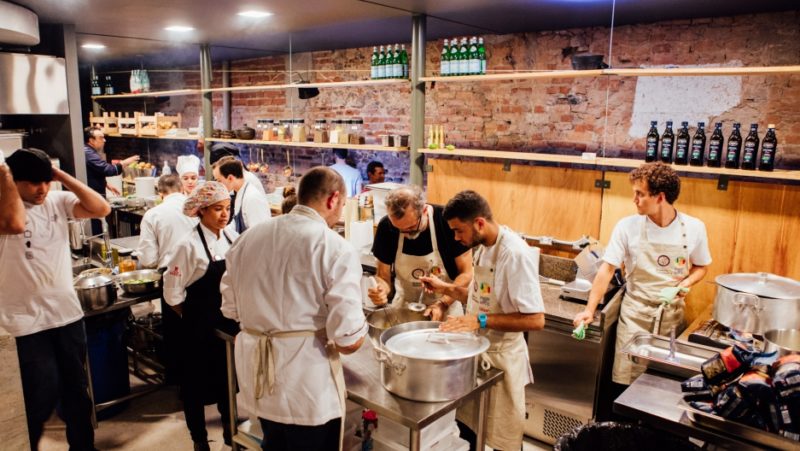 This article by David Leveille originally appeared on PRI.org on August 18, 2016. It is republished here as part of a content-sharing agreement.

Olympic athletes eat a lot more than powerbars and high protein shakes. Just imagine the roughly 250-ton mountain of food that has to be prepared to feed more than 11,000 athletes competing in the Rio Games.

The food supply chain at the Olympics, like other huge events, requires advance logistics, planning and educated guesses as to how much food and ingredients to have on hand to make nourishing meals.

Inevitably there’s going to be a surplus, whether it’s cases of bruised fruit and vegetables, or leftover palettes of potatoes and rice.

Now an international group of chefs and anti-hunger activists calling themselves RefettoRio Gastromotiva (refettorio is an Italian word meaning dining hall) has stepped in to rescue the Olympic food that might otherwise go to waste. Two chefs, Italian Massimo Bottura and Brazilian David Hertz, are leading the effort to turn excess food destined for the Olympic Village into meals for the hungry. They say the aim is to “offer food and dignity to people in situations of social vulnerability.” 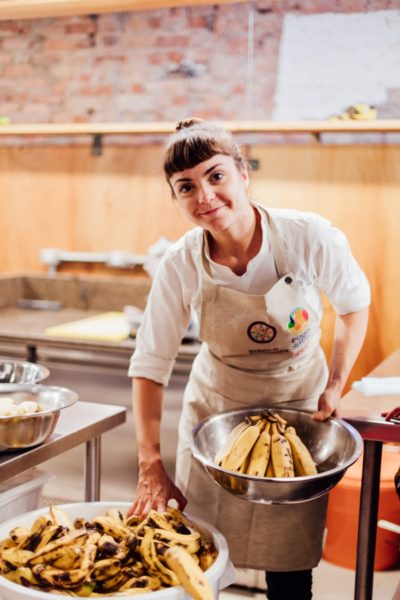 For the past few weeks, RefettoRio chefs have been serving up nightly dinners for 108 from the surplus of ingredients donated to them by the catering company that feeds the Olympic Village. These are not leftovers or table scraps.

“RefettoRio is going to work only with ingredients that are about to be wasted … like ugly fruit and vegetables, or yogurt that is going to be wasted in two days if you don't buy it,” says chef Hertz.

The restaurant has been set up in the Lapa neighborhood near the Olympic Village.

“It doesn't feel at all like a regular restaurant,” says Alexandra Forbes, a Brazilian food writer who helped organize RefettoRio. “The customers are so different. For many of them, it's the first time they’ve experienced a three-course dinner made by a great chef, one that’s so delicious. They feel very special.” One diner told the Times the food was the best he’d had in his 40 years.

Local neighborhood organizations that serve the underprivileged handpick the patrons from all walks of Brazilian life. They might include homeless people who are forced to pick through garbage bins for meals, street kids who scavenge for food, or abused mothers.

“They are not used to being treated with such care and respect,” says Forbes, adding that “they are so appreciative of the meal that sometimes they clap and dance with joy.”

Every day a different chef takes the lead. ”For instance,  the other day chef Massimo Bottura made a pasta, a carbonara that’s usually made with pancetta or bacon. He had a little bit of bacon but then he also used banana peels that had previously been smoked on a grill and he mixed that with the bacon, and it was smoky like bacon and it was delicious.”

Creating gourmet meals from an odd collection of ingredients can be challenge enough. But Forbes says the real goal for her RefettoRio team of cooks, bakers and servers is to “end some of the prejudice, prejudice against poor people, or against people who have problems.”

Battered women or people struggling with substance abuse, she says “are people like us, so just to show that they can be treated with respect and be served a great meal, I think, is important.”

At the same time, RefettoRio is trying to send a message about food waste. More than 30 percent of food produced around the world is never eaten because it is spoiled after harvest and during transportation, or thrown away by shops and consumers. Yet almost 800 million people worldwide go to bed hungry every night, according to UN figures.

“Events such as the Olympics are especially big in creating waste because you’re feeding so many people that it's really hard to calculate exactly what you need of each thing and it’s inevitable that you will have a lot of waste. But no one had really pointed a finger at that issue.”

Until now, that is.

RefettoRio Gastromotiva plans to build on its success by launching a paid lunch service. The profits will help offset the cost of providing free dinners for the hungry at night. There are also plans to try out the RefettoRio idea in Montreal, Los Angeles and New York. 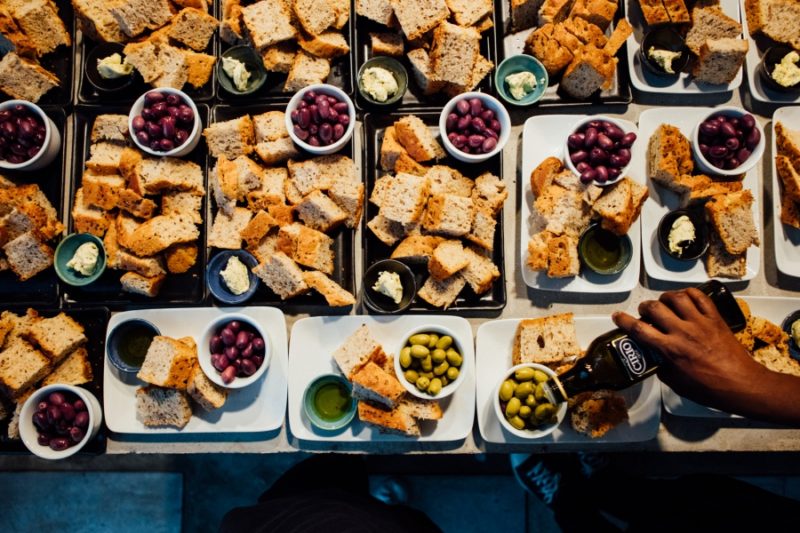 Free meals are being served nightly to 108 patrons at a special restaurant set up near Olympic Village. Credit: Refettorio Gastromotiva

Read more Global Voices coverage of the Olympics: Joy, Disappointment and Injustice at the Rio Olympics