‘When They Took Me Inside’ Syria's Saydnaya Prison, ‘I Could Smell the Torture’ 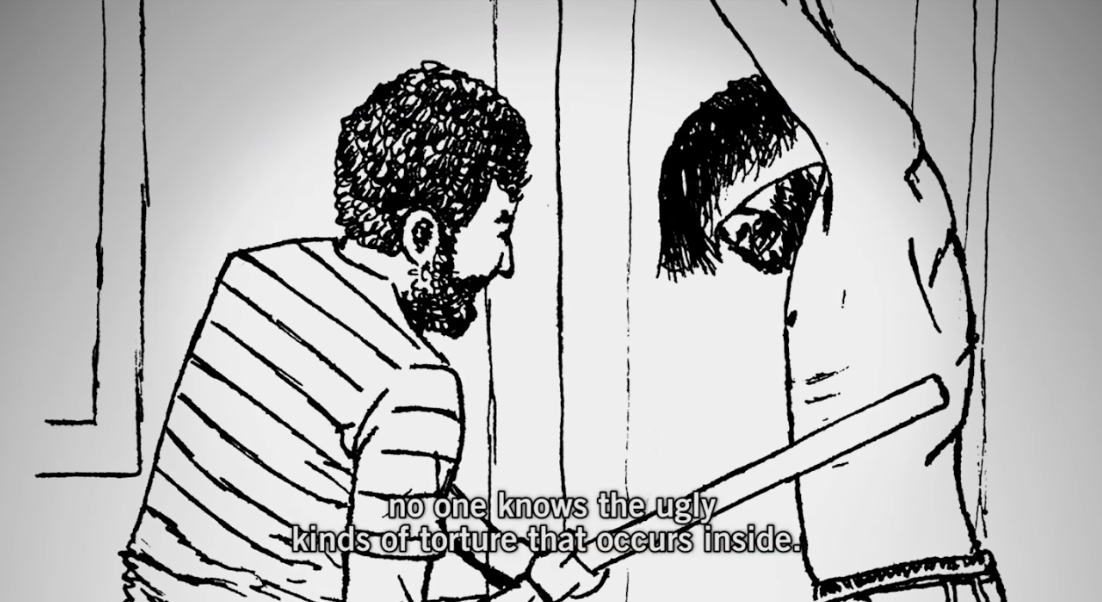 At least 17,723 Syrians have died in custody since 2011, a new damning report by the international human rights group Amnesty International has revealed. The report, entitled “‘It Breaks The Human': Torture, Disease and Death in Syria's Prisons”, started of with what is common knowledge by now, namely that:

Torture and other ill-treatment have been perpetrated by the Syrian intelligence services and other state forces for decades, fostered by a culture of impunity that is reinforced by Syrian legislation. However, since the current crisis in Syria began in 2011, the situation has become catastrophic, with torture committed on a massive scale.

But one particular prison highlighted by Amnesty International's report may be the most notorious of them all. In a Facebook post, the well-known Syrian intellectual and dissident in exile Yassin Al-Haj Saleh, who has himself spent 16 years in regime prisons for being a member of a communist pro-democracy group, described it as “the most horrible place on earth”. Eyal Weizman, director of the Forensic Architecture agency of Goldsmiths, University of London, even told British newspaper the Guardian “that the building is, itself, an architectural instrument of torture.”

Al-Haj Saleh and Weizman are both referring to Saydnaya prison, a military prison facility located 30 kilometers north of Damascus. It was this prison that Amnesty International attempted to expose in collaboration with Forensic Architecture and backed by first-hand testimony of 65 torture survivors.

Their accounts bear witness to some of the horrors endured by dissidents of the regime inside Saydnaya since the start of the revolution in 2011. Tales of the many methods of torture, including rape, were featured in the short documentary ‘Inside Saydnaya’ released by Amnesty International to coincide with the publication of the report.

One man, named ‘Jamal A’ by Amnesty International to protect his identity, was arrested for helping civilians displaced by the fighting and sent to Saydnaya in October 2012, where he stayed until January 2014. He recalls:

When we first arrived, they put us all in the shower [area of the cell], on top of each other. We were naked of course. My penis was touching [a fellow detainee’s] back. I got cramp and had to move my leg, and my friend took the space that I made. Then I accidentally put my foot down on his penis. He screamed. For this, they were beating us with a steel bar on the front of the palms. I had had an operation on my hand earlier, and we told them [but] they just concentrated on that spot, and beat it harder. The surgery meant that I had 10 times the pain. 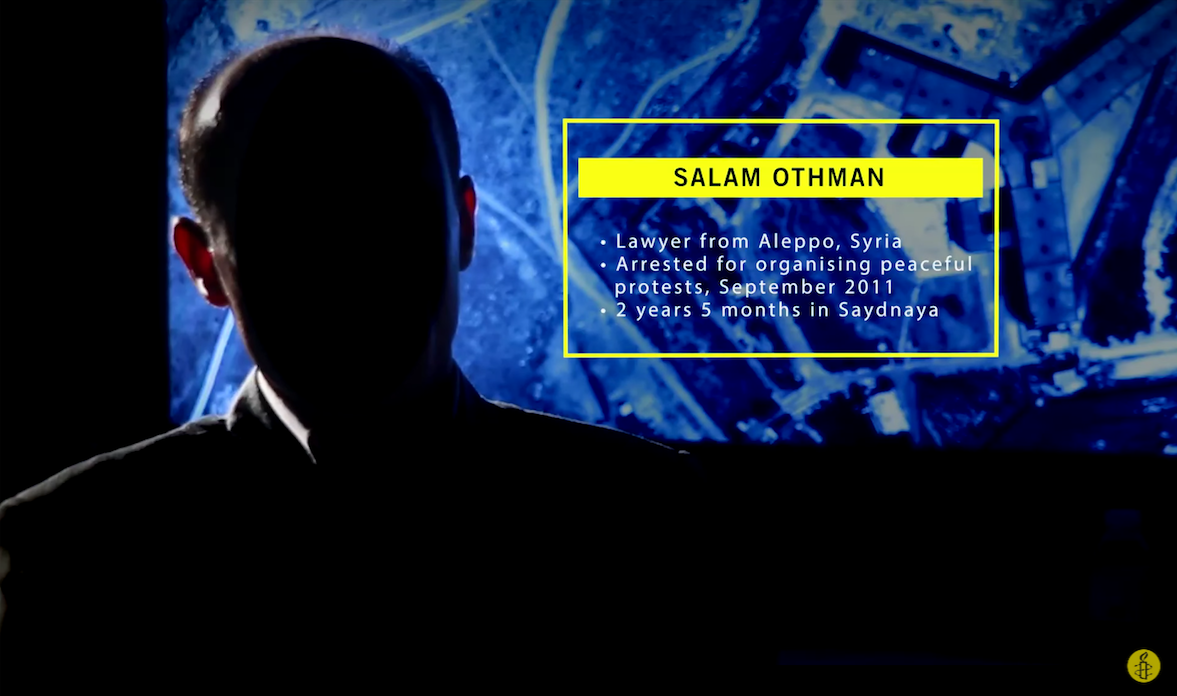 ‘Salam’, a lawyer from Aleppo, was arrested in September 2011 and sent to Saydnaya from January 2012 to June 2014 for taking part in peaceful demonstrations. He told Amnesty International that he could ‘smell the torture’ as soon as he entered the prison:

When they took me inside the prison, I could smell the torture. It’s a particular smell of humidity, blood and sweat; it’s the torture smell. They took me three floors underground. There were seven of us after the beatings. We were taken into our cell. It was about 2.5 meters by 3 meters. There was a big wall at the end of the room with a hole. There is no shower, just a toilet. It’s dirty and wet; water is leaking from the roof of the cell. It’s totally dark; there is no light; you can’t even see the other people in the same room with you.

Another activist, ‘Shappal’, who advocated for the rights of Kurds in Syria, said he was repeatedly beaten while the guards yelled ‘Bashar is your God’, referring to Syria's President Bashar al Assad, who has clung to power throughout the last five years of civil war:

They brought the food, but it was very little. They spent two hours beating us and saying ‘Bashar is your God’. They did the same for the detainees in the other solitary cells – we could hear them coming to us, cell by cell, and going down the row after us. Of course the other solitary [underground] cells were next to each other in a row, but the sound of beating was so loud that it could reach the sky. 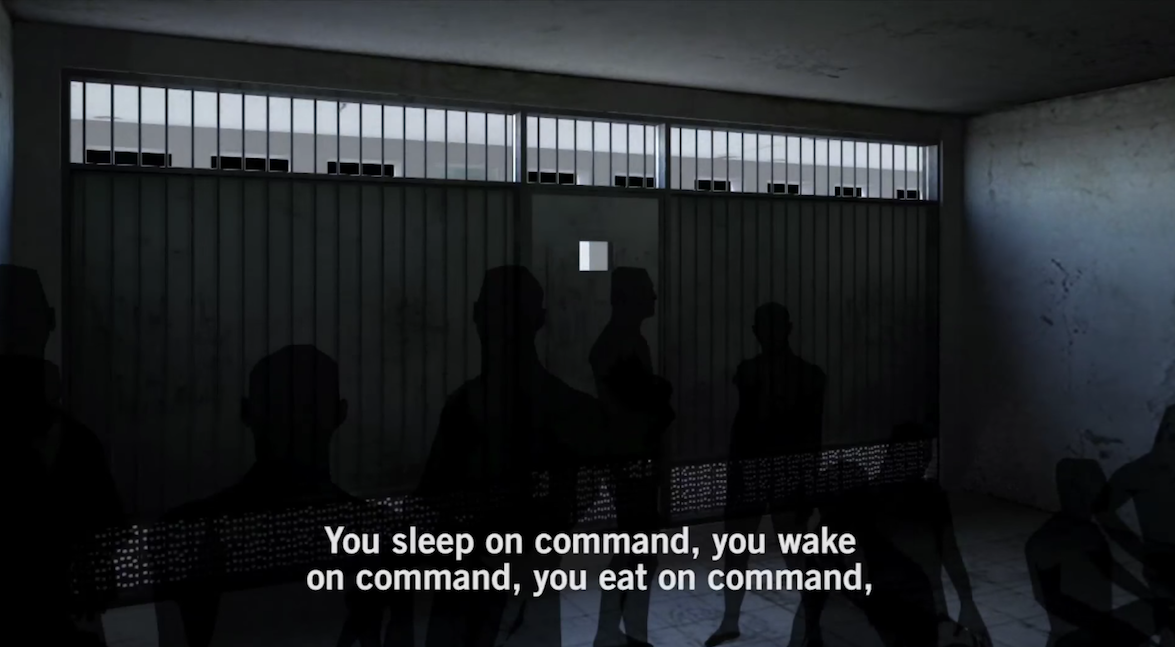 ‘A testimony to hold the mass-murdering Syrian regime accountable’

These testimonies follow a report released by the UN Commission of Inquiry in February 2016 in which the killings of detainees occurring between 10 March, 2011 and 30 November, 2015 were examined based on 621 interviews. It concluded:

Detainees held by the Government were beaten to death, or died as a result of injuries sustained due to torture. Others perished as a consequence of inhuman living conditions. The Government has committed the crimes against humanity of extermination, murder, rape or other forms of sexual violence, torture, imprisonment, enforced disappearance and other inhuman acts. Based on the same conduct, war crimes have also been committed.

In a statement released with the report, Philip Luther, the director at Amnesty International's Middle East and North Africa Program, stressed that the international community, specifically the governments of Russia and the US, must commit to ending these practices

The international community, in particular Russia and the USA, which are co-chairing peace talks on Syria, must bring these abuses to the top of the agenda in their discussions with both the authorities and armed groups and press them to end the use of torture and other ill-treatment.

Although Amnesty's report does not contain new information for Syrians who have lived and are living under the threat of arrest every day, subjected to the mechanism of authoritarianism surrounding the issue of detentions, worsened by rampant corruption (to know the prisoner’s conditions, to locate him, to deliver clothes or medicine, or to know if he’s even alive), it is a very important report that documents how the second Assad era, the era of Bashar, created its private iconic prison that followed the iconic Tadmur prison of the first Assad era, the era of [Bashar's father] Hafez al Assad.

Unfortunately, I worry that the fate of this report will be similar to the [2014] Caesar leaks [detailing the torture and execution of prisoners by Syrian authorities], as the world proved its indifference towards human rights violations practiced by the regime and its allies.

But this report is a very important document, and will have importance in the Syrian historical memory without a doubt, and I hope that it carries legal importance one day, like a testimony to hold the mass-murdering Syrian regime accountable.

Luna Watfa, the co-founder of Woman Organization for Syrian Prisoners and a former detainee herself, who spent 13 months in Syrian government prisons, asked her Twitter followers to read Amnesty's report:

Did you ever think how Assad torture centers look like?do you want 2explore it by yourself?now you can in #Saydnaya https://t.co/AwSh9EP17B

The Committee to Protect Journalists took this opportunity to remind us of a journalist for Palestine Today, Bilal Ahmed Bilal, who died in December 2013, nearly two years after being sent to Saydnaya:

One of the many to have died in Saydnaya prison: Palestine Today reporter Bilal Ahmed Bilal https://t.co/STgt1gB4JV https://t.co/8he0uzoIJI