The Crocodile's Got to Go? A Jamaican Bishop Blames the Country's Coat of Arms for Crime 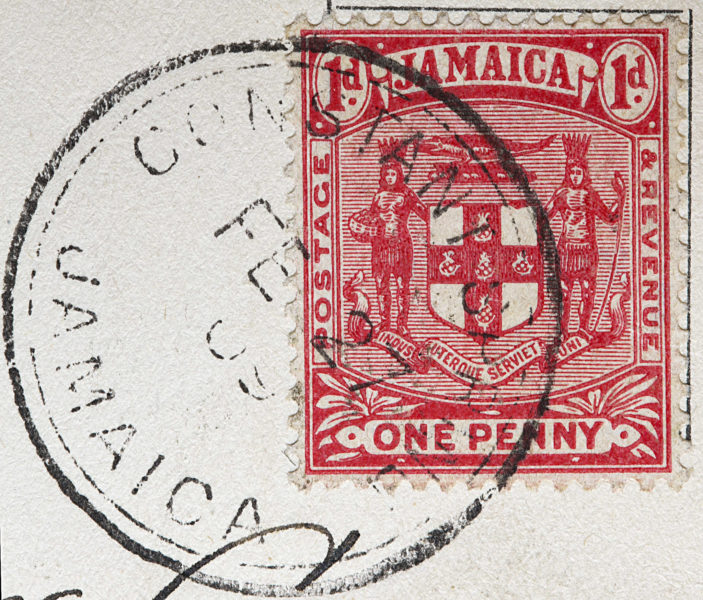 A postmark on Jamaica's Coat of Arms. Image by Mark Morgan, used under a CC BY 2.0 license.

If any period in the year could be described as the “silly season” in Jamaica, it would be the month of August. Once the independence day festivities have retreated, a torpor descends on public life. Journalists complain that there is no news, as the “movers and shakers” are mostly on holiday. This year, those Jamaicans who can afford the trip are at the Rio Olympics, while those at home celebrate Jamaican track victories in front of their televisions, in sports bars or at Half Way Tree in Kingston. Even Parliament goes on a long break, as Member of Parliament and public commentator Ronald Thwaites bemoaned.

In the midst of the vacuum, however, one religious leader has shaken up the summertime calm by suggesting the country's coat of arms encourages crime.

Unlike other National Symbols created at the time of Jamaica's Independence in 1962, the coat of arms, incorporating the national motto “Out of Many One,” is a legacy from British colonial rule dating back to 1661. Among other images, it depicts a man and women from the indigenous Taino community (formerly called Arawak Indians). The man holds a bow (likely used for hunting), while the woman holds a basket of fruit. A crocodile (the American Crocodile is a protected species in Jamaica) stands on a log above a royal helmet.

Bishop Rowan Edwards of the Lighthouse Assembly Church of God is a member of the Spanish Town Ministers Fraternal, an activist church grouping that holds regular rallies against crime and violence. A gang member deported from the United States in April has been blamed for a recent upsurge in violence in Spanish Town, and while addressing a prayer meeting in the town, Bishop Edwards pointed to aspects of the coat of arms that, in his view, promote violence and war.

In a radio interview, he explained:

You can have something more modern, something more unique, that does not speak of war. The Arawak Indians were involved in war…We know what they did here. But that's years ago, decades ago, and I think it's now time for a change.

In an interview with the newspaper Jamaica Gleaner, he elaborated, placing focus on the crocodile:

‘As a pastor serving the community of Spanish Town – and Jamaica on a whole – for the last 35 years, I cannot sit back and watch crime and violence take over Jamaica. … We are dealing with crime by fighting it on a pruning basis. You cannot prune a tree and have the tree die. You have to deal with things from the root,’ he said.

At the root of Jamaica's problem, Edwards believes, lies one of our national symbols.

Stressing that it is wrong, Edwards said crocodile speaks of fear and that it is out of place on the coat of arms.

‘Secondly, if you notice the Bank of Jamaica, their monetary symbol is a crocodile holding a key. Who wants to have a crocodile hold their key? No wonder why the financial condition is so bad,’ observes Edwards.

According to Edwards, Jamaica's problem with crime and poverty is a spiritual one, and it will not be alleviated until the issues surrounding the emblems are addressed.

Bishop Edwards announced his intention to obtain thousands of signatures in an effort to have the Jamaican Government “update” the coat of arms.

Off all the things causing crime, the Church has identified the Coat of Arms?? #tek it Jesus!!

While many Jamaicans joked about it, others corrected Fitz-Henley by pointing out that it was only one or two individuals who raised the issue, and that they did not represent “The Church”:

Some felt the discussion was worthy of consideration, in the context of Jamaica's approach to symbols from the colonial era. The Jamaica Observer editorialized:

While we have retained some very important symbols and institutions of colonialism, there is, indeed, justification to make more changes, even as we acknowledge that it will take some time to do so…

In recent weeks, a call to change the Coat of Arms has triggered debate, which is healthy, because the fact that it has been like that for so many years does not mean that it should not be reviewed and changed if necessary.

@PA13Baker @Petchary PLEASE tell the Church that they r increasingly falling down on the job & that's y they will not b effective re crime.

Columnist Franklyn Johnston dismissed the bishop's argument, suggesting “The Church” might have better things to do:

The pesky attention-seeking bishop who made an issue of our coat of arms continues the tradition of the upstart church taking selfies while Rome burns. The bishop won — he got column inches — but what impact on crime? We are chat and pose people.

One letter writer defended the coat of arms, suggesting that through the logic of the bishop's argument, symbols of the rebellious Maroons should also be removed:

The call to change the Jamaican coat of arms by Bishop Rowan Edwards is preposterous! If we were to accept his argument about the presence of the bow in the Tainos’ hands as symbols of violence, the same fallacy could be applied to the abeng of the Maroons, a powerful symbol of African culture and tradition used to alert the villagers if a wedding, birth or death was being announced, or a call to arms for impending war.

The gumbeh drum used by the Maroons and similar types now used in Anglican and Roman Catholic worship were originally for communicating with the dead, or sending messages to start uprisings against the government.

The Jamaican coat of arms, which is now 325 years old, was accepted by the Government and Opposition at the birth of independent Jamaica in 1962 as a ‘badge of great historical significance to the nation’ and should be retained.

Another observed wryly that perhaps it is time Jamaica began to live up to its national motto, “Out of Many One”:

I respect the contribution made by the goodly bishop, and I stand by his right to free speech; however, I totally disagree with his stated position. The truth exists that there are many other things within our culture which inspire and nourish crime and violence. Examples of our music and socialisation can be listed, but the coat of arms is not to be named among them.

This national symbol is perhaps one of, if not the last known symbol which pays regards to the earliest settlers of our country and notes the contributions they made. If changing its substance is a means to tackling crime, then we might as well change the national motto as well, for we certainly haven’t been living as if we are truly ‘one’.

Bishop Edwards’ words have fallen on mostly stony ground. It is generally accepted that the Arawaks were a peaceful people, and crocodiles rarely attack Jamaicans, who mostly treat them with a fearful respect. However, crime in Jamaica remains as intractable problem as ever.