Exposing Discrimination or Unfair Trial by Social Media? The Case of a Workplace Hairdo in Trinidad & Tobago 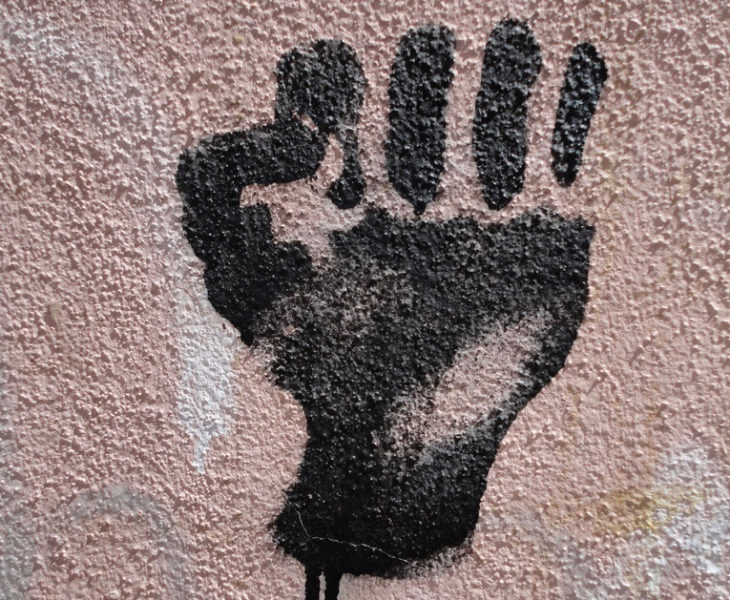 Black Power fist; image by Paul Sableman, used under a CC BY 2.0 license.

The COLFIRE controversy continues to heat up in Trinidad and Tobago. In correspondence dated August 11, 2016, the insurance company's human resources manager signed a letter asking employee Maurice Ramirez, who is black, to adopt a more professional hairstyle. Ramirez posted a photo of the letter — and his ‘do — to Facebook. Although he thereafter deleted the post, it had already gone viral, sending the local blogosphere into a tizzy over the perceived discrimination against natural hair.

Four days later, it was revealed that COLFIRE's management had sent Ramirez on paid leave, pending an internal investigation on the matter. In a statement over the weekend, the company said that it couldn’t publicly discuss the case of an employee and that it “denies the damning allegations that have resulted from the publication of an internal document”. In an update on the matter posted by Facebook user Pearce Robinson (who supports Ramirez), he states:

The company thought that it was necessary to enforce ‘administrative leave’, because he caused the company great ‘public embarrassment’.

Staff have been told to use their social media accounts to boost the company's image online and any employee found to be bad talking the company on social media or entertaining such talk will face disciplinary action.

He [Ramirez] is wrong to light up his employer so on a public forum … It would have been smarter to comply and then complain.

Sometimes we have to shatter the status-quo to make fundamental changes. its how things have happened for centuries. There is always a spark that ignites the change.

Change is what netizens are agitating for. Many interpret the company's conservatism as racial discrimination and believe that this has been the status quo for far too long. University lecturer Amilcar Sanatan quoted an excerpt from the 1971 report of the Commission of Enquiry into Racial and Colour Discrimination in the Private Sector:

We are impressed generally in the case of the banks that a state of racial and colour imbalance exists because of the inheritance of institutionalized forms of discrimination which have not been completely changed…some banks have been more radical and progressive than others, but in general the older the bank, the more conservative its policy appeared…Even though active discrimination in new appointments may have ceased, the social effects of past discrimination still remain highly visible…this requires in the interest of social justice and public confidence that deliberate institutional measures be taken…to see that this situation brought to an end.

Nearly 50 years later, the country appears to be fighting the same battle, albeit virtually this time. Netizens began to hit back, some in very creative ways. Artist Darren Trinity Cheewah posted two new anti-COLFIRE images on Facebook, which were being widely shared — the first portraying a silhouette of an employee shackled to his desk and the other comparing the insurance firm's stance to United States Republican presidential candidate Donald Trump's controversial election campaign: 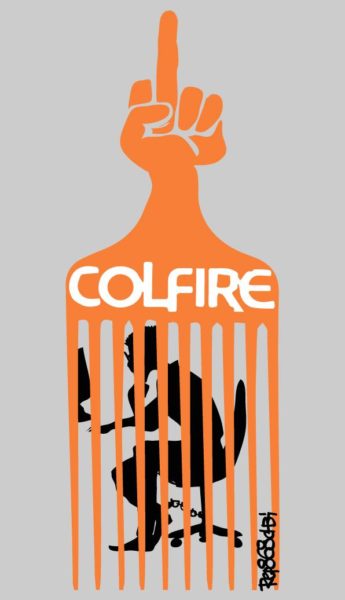 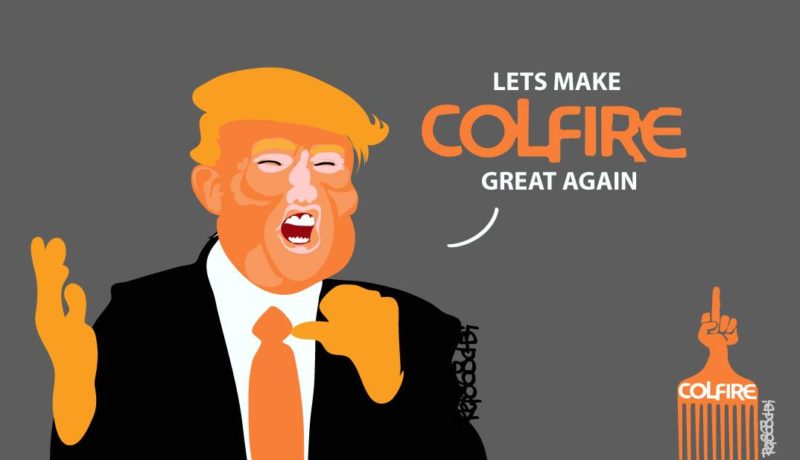 There was even a quiz — the link to which social media users were liberally posting — to determine who had what to took to be a COLFIRE hire. 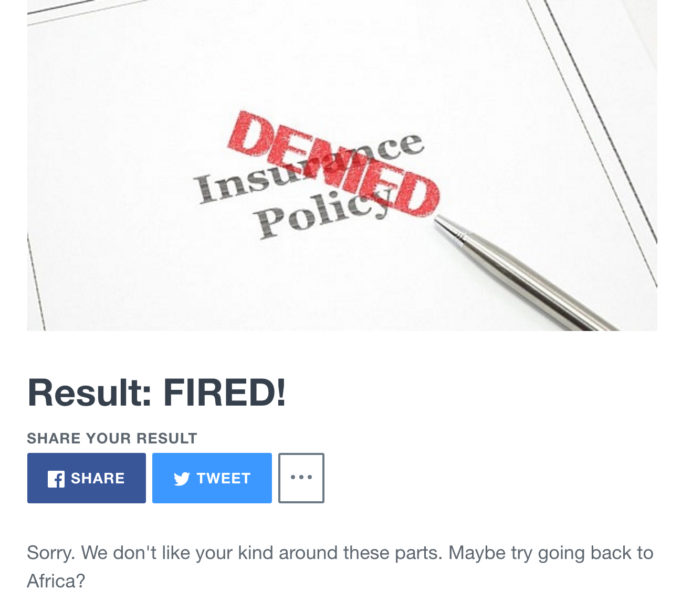 A screenshot of the “FIRED” result of the COLFIRE quiz that is being widely shared on social media.

That #Colfire quiz. No chill 😂😂 Brands need to remember that consumers are better at content creation than some marketers.

Even Trinidadian calypsonian David Rudder put in his two cents’ worth, posting a photo of the Jamaican athlete who won gold in the Men's 110m hurdles in Rio and commenting on his Facebook page:

A Jamaican, Omar Mc Leod, sporting a ‘Colfire’ wins the 110 m hurdles gold in Rio.
And in case yuh don't know what a Colfire is, it's a now controversial Trinidadian hairstyle.

‘The internet has created a new class of publishers’

Humour aside, there is the serious question of possible legal consequences. Some lawyers are telling the media that the employee “doesn't have a legal leg to stand on” if he were to bring a discrimination suit against the company or the company were to take him to court. But one netizen, Tshai S White, said that she spoke to a lawyer in the industrial court who disagreed, saying that the header of the letter Ramirez posted “did not state Private and Confidential”. In Trinidad and Tobago, some companies may ask employees to sign confidentiality agreements pertaining to sensitive operations or client information — but it is debatable whether such agreements would extend to workers’ rights issues.

Given the numbers of netizens accusing the company of racism, there's also defamation to think about. In a recent blog post, lawyer and Global Voices author Jason Nathu, who recently won a groundbreaking discrimination case in Trinidad and Tobago, talked about the potential legal ramifications of posting content on social media networks:

The internet has created a new class of publishers: ordinary, everyday people who are posting comments about each other on public forums.

An online comment is potentially libellous in Trinidad and Tobago if it damages someone’s reputation […] These include letters to the editor of local newspapers, public comments on media websites, blogs and comments to blog postings, social media posts and chat rooms. […]

The main defence to a libel action is ‘truth’, that is being able to prove that the defamatory allegation is substantially true.

Nathu spoke about the issue in a recent television interview:

This knowledge has not stopped social media users — and now, even COLFIRE employees — from speaking out. Some staffers have been contacting activists like Pearce Robinson to share their experiences. On Facebook, he recounted some of them, posting another update with scans of letters the company has issued to former employees:

Employees are threatened with their jobs if they take ‘Sick Leave’.
Staff sick leave has been reduced from 14 to 12 days without consultation.
Members of the finance department confirm that Mr Ramirez seems to be unfairly targeted. […]
The company generally tries to be ‘all inclusive’ but that its not always reflected in how they speak & treat certain people in the company, often with dual standards.

Imagine getting caution letters for leave that you are entitled to? #ColfireWithTheGoodHair

Imagine having a manager walk around to check that employee shoes are appropriate? #ColfireWithTheGoodHair

This reality is not only a reality at COLFIRE but many corporate institutions right across Trinidad & Tobago. But it doesn't have to be that way, especially if we are mobilised to stand up against this behaviour. The sheer racism and bullying of #COLFIRE must not be tolerated, but also the general attitude of oppress, intimidate and bully employees needs to be stamped out. Employees must not feel that there is no recourse to dismantling the systems of empire.