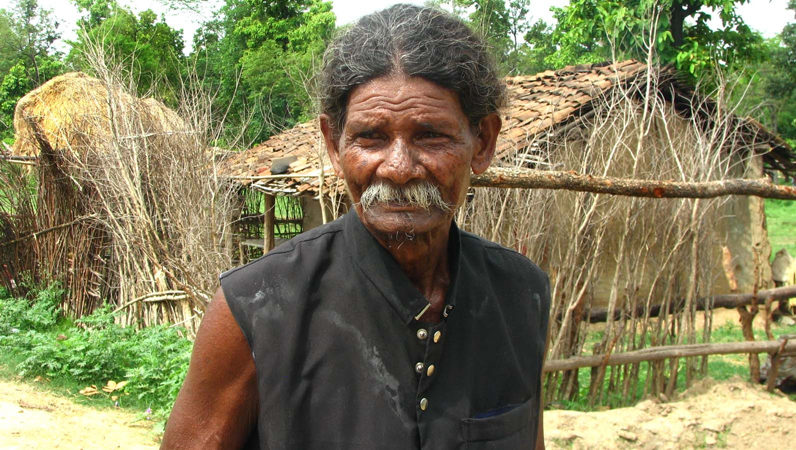 This post by Moushumi Basu was originally published on Ensia.com, a magazine that highlights international environmental solutions in action, and is republished here as part of a content-sharing agreement.

The wild hillocks and the forests of Central India are a world of their own. Nestled on lush green foothills are intermittent clusters of villages, scarcely touched by modern civilization. They are the ancestral home of an ancient indigenous tribe, the Baiga, which has had a symbiotic relationship with these jungles and their biodiversity, preserving them with their knowledge for generations.

These forests are also a part of the Central Indian Landscape, which hosts nearly 40 percent of India’s big cats.

Tigers are classified as endangered Schedule I species under India’s Wildlife Protection Act, which offers them a high degree of protection from human activities, such as hunting and poaching. The Baiga, for their part, are categorized as Particularly Vulnerable Tribal Group by the Indian government, a designation that safeguards the community’s traditional rights with respect to identity, habitat, sources of subsistence and culture in natural surroundings. Further, the Forest Rights Act, passed by the Indian parliament in 2006, guarantees traditional forest dwellers such as the Baiga rights of habitat and livelihood on jungles they had been living in or using before December 13, 2005.

In short, the government has guaranteed both tigers and the Baiga protection to live in their native forest habitat.

Representatives of the Baiga community, however, say they are getting uprooted for the sake of the tiger. They contend that government agencies and certain conservation groups see them as obstacles to efforts to save the big cats. In some cases, they say, they are banned from customary use of forest products or arrested under false charges of hunting. They are also lured by the state forest department from the tiger reserves with compensation for leaving and promises of better life outside the forest.

What can be done to help vulnerable Baigas and endangered tigers co-exist? Lessons from elsewhere in India offer some promising insights — not only for the Baigas and tigers, but for indigenous communities around the world that find their own survival at odds with the survival of endangered species.

Home to some 85 to 100 tigers, Kanha is one of the largest habitats of big cats in Central India. It inspired Rudyard Kipling’s Jungle Book in the 19th century, and today it is a favorite destination of tourists looking to spot a tiger. They enter the reserve in queues of safari jeeps armed with cameras to catch a sight of the charismatic cat. If they do manage to see one, often pandemonium ensues — with jeeps and noisy, excited crowds jostling their way to the scene. Distressed by the hubbub, many of the tigers migrate into the more peaceful forests inhabited by the Baiga, adding to migrations already occurring as a growing tiger population makes Kanha more crowded with cats. There they draw the attention of government and nongovernmental conservation entities. Although there is no legal provision allowing government officials to force the relocation of villages from wildlife sanctuaries, such as Bhoram Deo, local people say they’re being coerced to leave in order to accommodate the tigers and other wildlife.

“Tigers, leopards, or forests have never scared us,” says Phul Singh Baiga, a resident of Bijadhaap, a village with 28 Baiga hutments on the outskirts of Bhoram Deo sanctuary. “But today, we are indeed frightened of the forest department and conservationists. […] In the name of tiger protection, we are being harassed on several pretexts to scare us out of our jungles.”

According to B.N. Dwivedi, the principal chief conservator of forests and chief wildlife warden of Chhattisgarh, “There are plans on our part to relocate villages from within sanctuaries and protected areas, as this would make the forest more inviolate for tigers and wildlife. […] But no force is being used to displace settlements. As per the government norms, evacuation of villagers is done with their prior consent — this cannot be done without their acceptance.”

But Indu Netam, the convenor of the non-governmental organization Adiwasi Samta Manch, which works with the Baiga and other tribal communities to secure indigenous rights, substantiates the elder’s claims.

“[The] Baiga community, despite being categorized as a Particularly Vulnerable Tribal Group in India, is being denied the provisions of Forest Rights Act, in most parts of the state, which guarantee them habitat and livelihood rights within their jungles,” Netam says. “As a result, many Baigas are struggling hard to survive.”

But does it have to be either/or? Recent government data on the status of the tiger population in the Biligiri Rangaswamy Temple (BRT) Tiger Reserve in the South Indian state of Karnataka suggests not.

In this reserve, the Soliga indigenous community made history in 2011 as the only tribe in India to get its traditional forest rights formally recognized in the core area of a tiger reserve under the Forest Rights Act. The tigers and Soligas are flourishing together at BRT. In fact, the number of big cats in BRT nearly doubled from 35 in 2010 to 68 in 2014.

Historically a cave-dwelling, nomadic tribe of shifting cultivators and forest gatherers, the Soligas had been living in the BRT forests for generations. However, in 1974, when BRT was declared wildlife sanctuary, they were relocated in small settlements called porus in and around the forests. Some got small plots of land for sustenance; others took to manual labor. Gathering non-timber forest produce from the BRT (including honey, gooseberry, and lichen) continued to remain the main source of their native food system and their rudimentary economy.

Then, in 2006, the state government took away the Soliga’s rights to collect forest produce under the Wildlife Protection Act, impoverishing thousands of Soligas. And to make matters tougher for them, the BRT Wildlife Sanctuary was converted into the BRT Tiger Reserve in January 2011. This brought into question the fate of about 6,000 Soligas living in the core area of the reserve and another 10,000 acres of “buffer zone” (forest fringing the core area).

“The forest department initially coaxed and coerced our people, especially the youths, for relocation from the reserve,” says C. Made Gowda, the secretary of the Zilla Budakattu Girijana Abhivrudhi Sangh (Soliga People’s Collective). “But we resisted.”

What makes it possible for the Soligas and tigers to co-exist? For one thing, forest conservation ethics are interwoven with the ethos and religion of the tribe.

Protest marches and rallies led to months-long consultations and discussions with the government administration and forest department. In October 2011, the tribe succeeded in formally securing its right to collect habitat and non-timber forest produce in its ancestral land in the tiger reserve under the Forest Rights Act. Today, Soliga settlements are spread across all the five ranges of the reserve.

What makes it possible for the Soligas and tigers to co-exist? For one thing, forest conservation ethics are interwoven with the ethos and religion of the tribe. Soligas worship the tiger and consider it a sin to fell trees.

The tribe and its elders also collaborate with the state forest department in conservation, bringing traditional solutions to bear on various challenges of conservation in the BRT. These include the growth of invasive weeds such as Lantana camara, forest fires during summer months, relocation of animals that venture into human settlements, poaching, granite quarrying and timber smuggling.

Further, the Soligas are also working out area-specific conservation plans for the tiger reserve based on their traditional knowledge, which they hope to put into practice with the cooperation of the forest department and non-governmental organizations.

If the Soligas and tigers can mutually coexist in their battle for survival, can other indigenous communities such as Baigas take a page from their book?

“It is time we relook at our conservation policies and strategies.” – S. Faizi

On an international basis, there is much interest in finding out.

“It is time we relook at our conservation policies and strategies,” says ecologist S. Faizi, the first chairperson of Convention on Biological Diversity Alliance and current member of the CBD Expert Group on Biodiversity for Poverty Eradication. “The whole tragedy is that we are displacing and disenfranchising the historical custodians of biodiversity, who have lived in our forests and nurtured its wildlife for centuries.” Even the 12th meeting of the Conference of the Parties to the Convention on Biological Diversity, held in Korea in October 2014, emphasized the value of reinstating traditional knowledge in forest and biodiversity conservation.

“What is happening in Kanha Tiger Reserve epitomizes the ugly side of the conservation industry — thousands of tourists career through the park in noisy jeeps, clamoring to take photos of the beleaguered tigers,” says Stephen Corry, director of the not-for-profit organization Survival, which advocates for indigenous peoples worldwide. “Meanwhile, Baiga communities that have carefully managed the tiger’s habitat over generations are annihilated by forced evictions. The irony appears to be lost on the conservationists. If India doesn’t allow the Baiga and other tribals to return, and prevent further villagers being kicked out, these communities will be completely destroyed. Evicting tribes won’t save the tiger.”

Moushumi Basu is an independent researcher, freelance journalist and documentary filmmaker based in Kolkata, India.She has been working on various issues related to environment, health and indigenous communities (forest and land rights, culture and heritage, etc.). Her print and video stories have been published in national and international publications and websites, including Zoomin.TV, Corpwatch, BBC Online, Economic & Political Weekly, Radio Netherlands Worldwide, and Infochange.
Editor’s note: Quotes from Phul Singh Baiga and Indu Netam were translated from Hindi by the author. 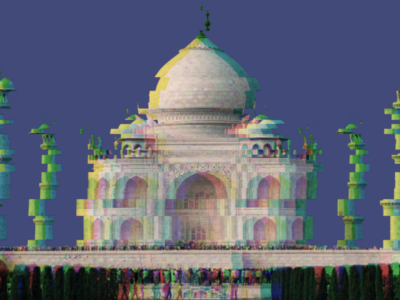 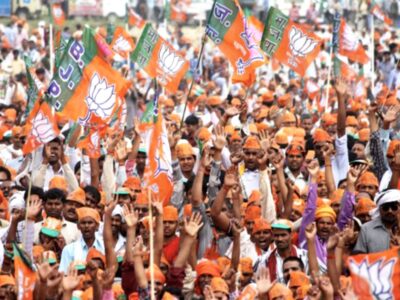 With spokesperson's suspension, BJP supporters in India are losing faith in the party