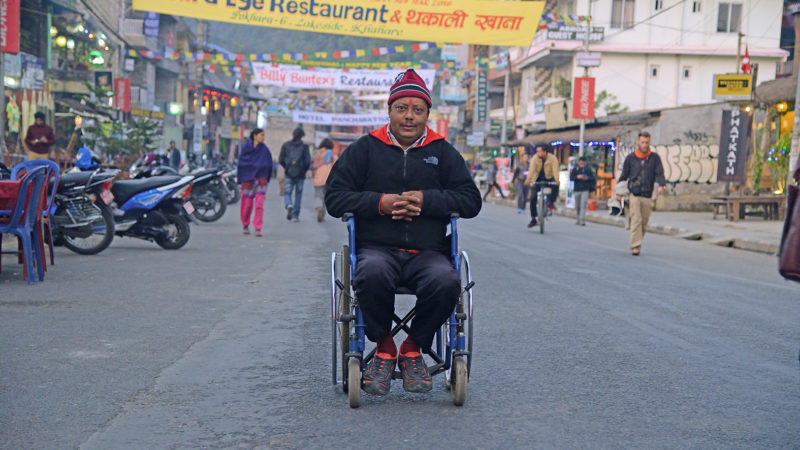 “I have travelled to 71 out of the 75 districts and all the way from Mechi to Mahakali, alone in my wheelchair, to raise my voice for equal rights for people with disabilities in the new constitution.” Surya Bahadur Ranabhat Yatri, Pokhara. January 1, 2016.
Photo by Jay Poudyal. Used with permission.

As a child, Jay Poudyal enjoyed listening to his grandma tell folk stories. As an adult, he became interested in reading, travelling and taking photos. He also began to drink heavily, turning into a severe alcoholic.

After Poudyal completed rehab with his wife's help, he discovered Humans of New York (HONY), a blog in which Brandon Stanton photographs and interviews random people on the street. Poudyal was inspired to start a Nepalese version, so he created a page on Facebook, posted a story and began sharing it with friends.

Thus, began the journey of Stories of Nepal. 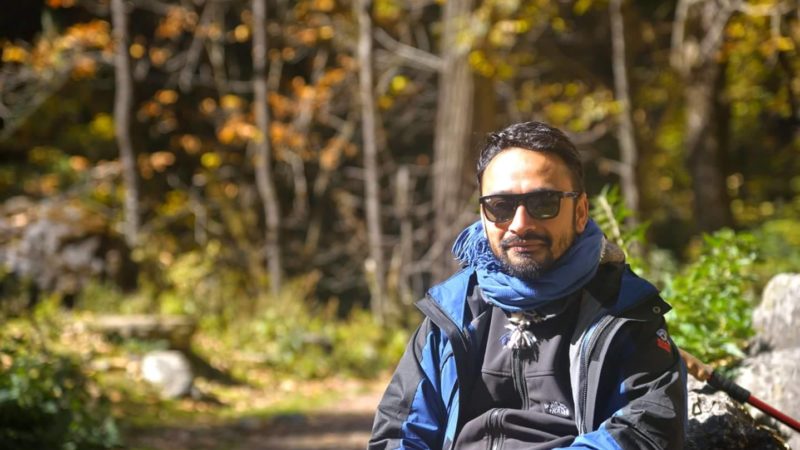 On his photo blog, he writes:

[…] I am on a journey to discover and share stories of the everyday Nepali. Over the past couple of years, I have roamed the streets of Kathmandu and travelled my country to talk to people, hear what they have to say and listen to their tales of sorrow and happiness. I started off as a photographer, capturing moments and people, but inspired by Humans of New York I started sharing these pictures along with the conversations I had with individuals. After all, a picture may say a thousand words, but a few words can change the story. That was how Stories of Nepal Facebook page was born, and its community has come a long way. […]

With around 265,000 followers on Facebook, Stories of Nepal features tales of individuals from all parts of Nepal – the mountains, the mid hills and the southern plains.

Let’s take a look at some of his photo stories.

The legacy of Bara 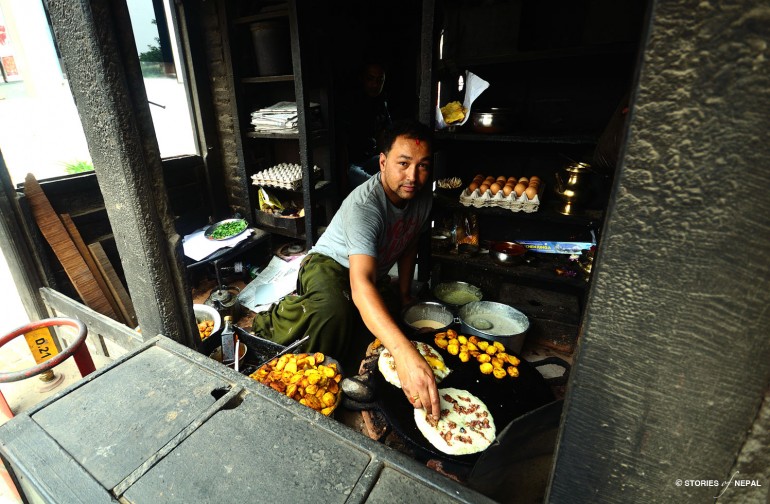 The legacy of Bara. Photo by by Jay Poudyal. Used with permission.

As a kid, I have watched my grandfather and then my father make Bara Aloo from the exact spot you are taking my pictures. I’m the third generation to continue in this legacy.

We have been running and serving Bara’s for the last 80 years. My grandfather, Krishna Raj Shrestha, opened this shop so that travelers/porters heading Bhaktapur from Kathmandu could stop en route for a protein enriched snack. It was then passed on to my father Ramsharan Shrestha. After his demise I took over and we are still going strong.

Bara is a light and spongy lentil patty that resemble a small flat pancake.

What makes your Bara special?

“My passion for making perfect Baras. Also, I only use local home made sunflower oil for the Bara and it’s cooked in wood-fire and served in leaves.” 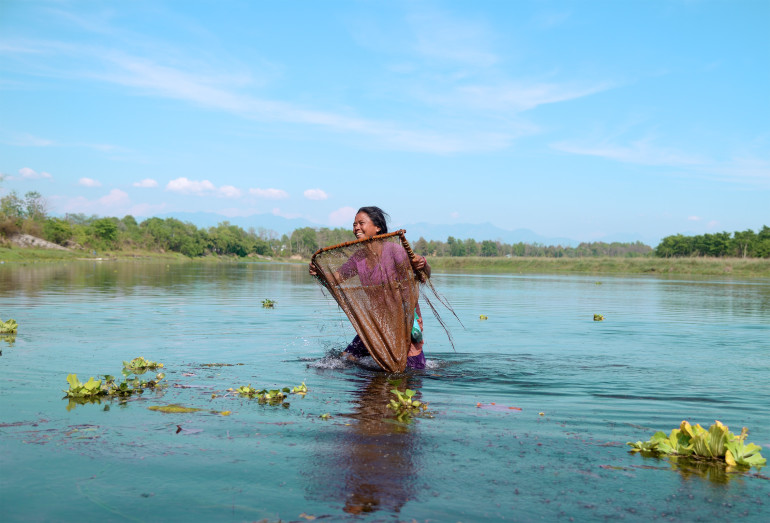 Fishes tonight. Photo by by Jay Poudyal. Used with permission.

“We have to eat, no matter what. No matter how happy, how sad. No matter how rich, how poor. Fish tonight, hopefully, if you let me fish (laughs).” (Rapti River near Patiyani, Chitwan) 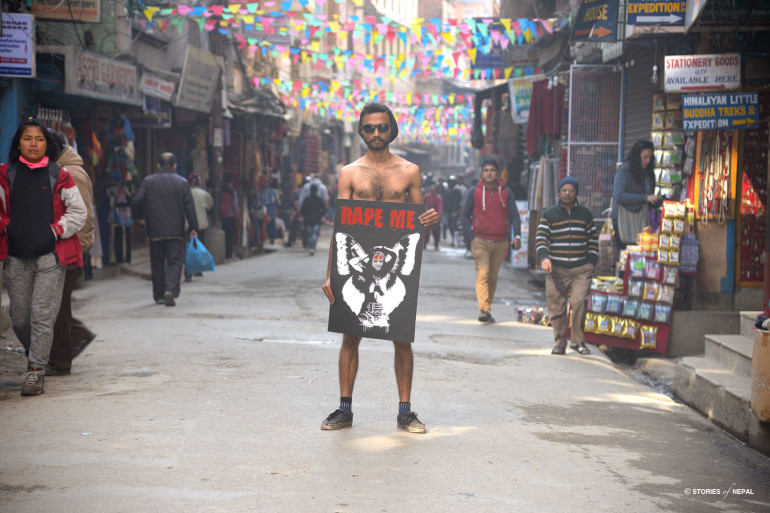 Violence against women. Photo by by Jay Poudyal. Used with permission.

“Burnt alive. Beaten and forced to eat human faeces for being a ‘witch.’ Raped. Molested. Abused, physically and psychologically, in public spaces, in front of mute bystanders. The news about violence against women in our immediate and distant communities is brutal and consistently shocking. As an artist, I believe they deserves an equally shocking reflection and response – at least enough to provoke a sense of discomfort with what we allow and accept in our society where female deities are revered, in the country of the living virgin goddess Kumari, a world built by mothers, sisters, wives. Kumari is a living goddess and some of our biggest festivals are based around her. But why is reverence of women reserved to the gods, and not their mortal counterparts on whom the deities are in fact based?” 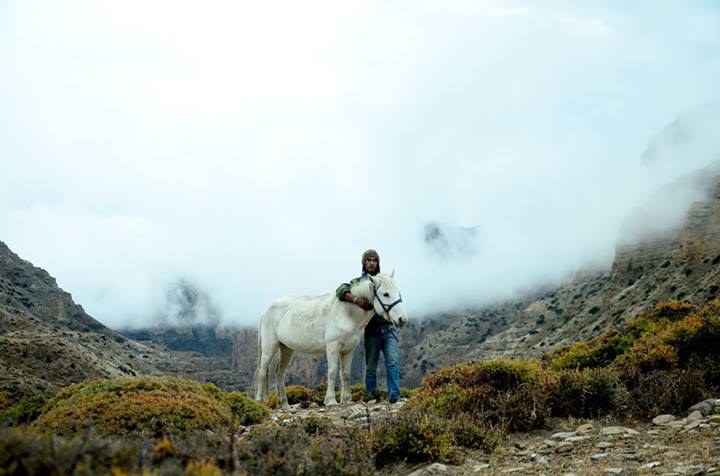 It costs Rs. 1 lac. Photo by by Jay Poudyal. Used with permission.

“There are around 50 horses in my stud. Sometimes it goes up to 75 if someone asks me to take their horses out with mine. This one’s called Sete and is very obedient but shy. It can carry up to 100 kilos at a time. 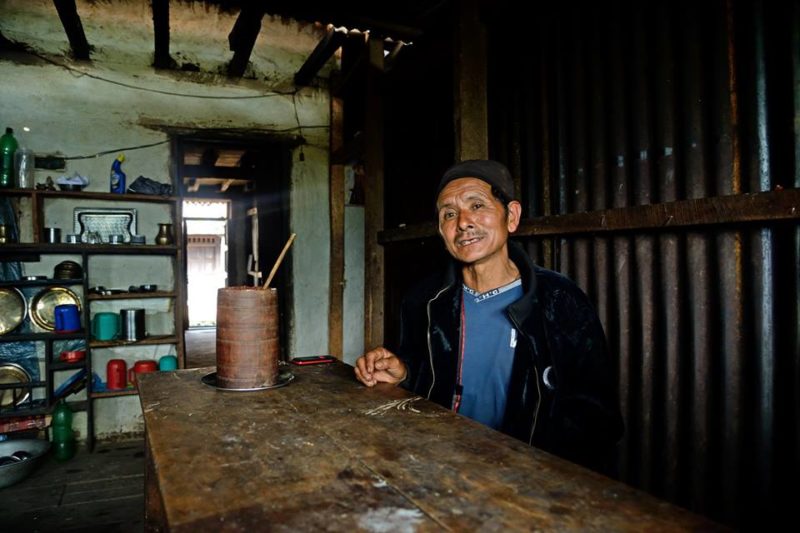 I was mad. Photo by by Jay Poudyal. Used with permission.

“We were Shamans from old times. When father died, it became my responsibility to follow in his footsteps. But I really didn’t want to become a shaman. I wanted to do something normal. Maybe just become a farmer and go to school. But every time I brought up school, father would start playing his drums and chanting his spells. He would say I was possessed. So I became depressed and I became mad. I did not recognise people and places and sometimes I walked around the river banks without clothes. One day a girl came to me and gave me Mug-wort to eat and some water. She asked me to chew on the Mug-wort and drink the water. I did and I was cured. I put on my clothes and went home and told my father, I will obey him. That day there was a big celebration at home. Father sacrificed a goat and a chicken and I ate full stomach after a long time.”

“Everything will be fine” 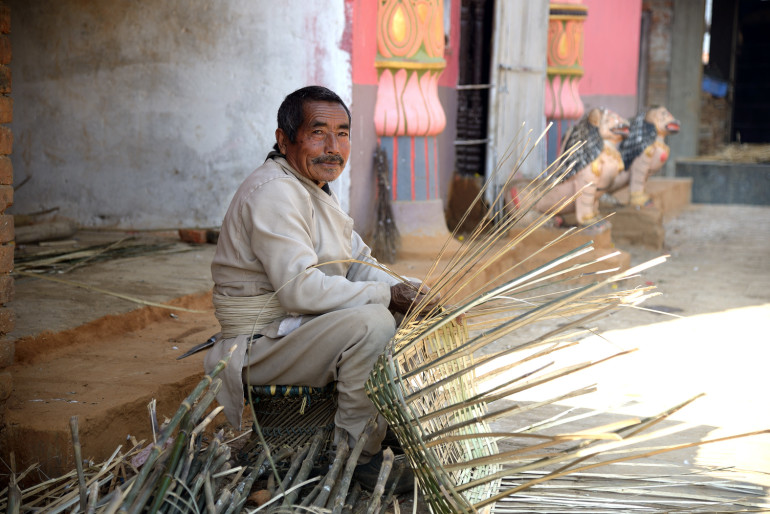 Everything will be fine. Photo by by Jay Poudyal. Used with permission.

“We were both the same age when we got married. Maybe 17. We spent almost 50 years together. Cried together and laughed together. But last year she passed away and left me alone. She would come and sit next to me and help me make baskets and we would talk for hours. When lunch was ready she would bring it to me. She was happy woman. Today, I feel she is somewhere around. Every once in a while I feel her presence and turn around to see if she is at her spot. Sometimes I hear her whisper and say, ‘Don’t worry, everything will be fine.’” 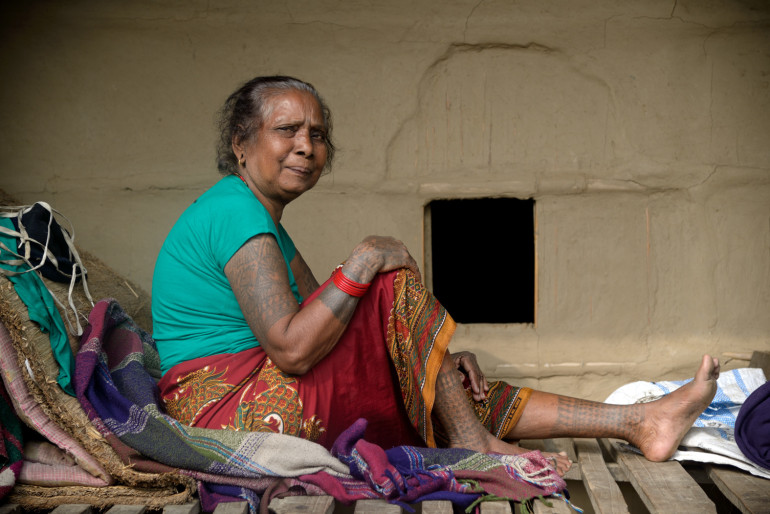 Tattoos for afterlife. Photo by by Jay Poudyal. Used with permission.

“In the old days, when girls of my age were young, a man from India would come and do these tattoos in our bodies. When my friend was being pierced, I could see tears in her eyes because of the pain and I remember being afraid as I was next. That night I couldn't sleep. The next day I asked my mother why I had to get the tattoo. She said, “Who will marry a girl without a tattoo? No one will take you unless you have them.” I never understood that. Later I also learnt that in our culture tattoos were also a worship to nature. We don't take anything with us when we die, but I will take these tattoos. It is like a gift of this life and this nature for me to take to my afterlife.”