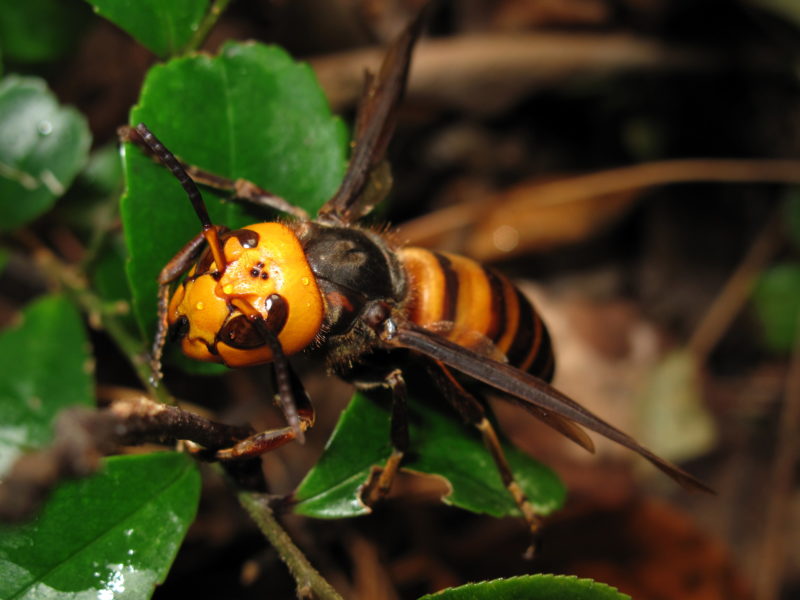 Japan has a morbid fascination with the Japanese giant hornet (Vespa mandarinia japonica). These giant insects can be found all over Japan, and are especially active in the month of August. Their bites are painful, and a single sting can result in hospitalization. Multiple stings can result in death.

The summer months in Japan sometimes are accompanied by stories of hapless hikers or farmers being swarmed by the giant hornets and stung to death. One blogger has compiled a list of do's and don'ts when encountering giant hornets in Japan. The best advice? Stay away from their nests, especially in August.

There is actually quite a variety of bees, wasps and hornets native to Japan. Hornets are generally referred to as “suzume-bachi” (literally “sparrow-wasp”, likely due to their size) and include the Japanese yellow hornet (Vespa simillima), similar to a yellow jacket in Europe and North America.

The giant hornets fill many Japanese people with a special kind of dreaded wonder.

As soon as I got home I put away my groceries, and started watching…

Ever since I was stung in junior high I've been afraid of bees (I realize I am getting mixed up with bees and hornets). So let's all take the time to remind ourselves to be careful of hornets!

The Japanese giant hornet is most active in August and early September, as thousands of larvae in the nest have matured to become not only new male and female drones ready to take off, mate and find a new colony, but the workers that support and feed them. Anyone out walking in the woods, or even having a barbecue in the park, needs to be careful. From early August until the beginning of September (horizontal axis) the danger from Japanese giant hornets skyrockets as the number of active wasps (vertical axis) dramatically increases within each nest. Image from grapee.

Hornets and humans can live in close proximity. While giant wasps prefer wooded areas for their nests, the Japanese giant hornet can be found in the city.

While not a giant Japanese hornet's nest, this Twitter user, with a photo of a yellow hornet's nest, shows just how easy it can be to come face to face with a less-than-friendly insect:

Holy crap! There's a wasp nest on our window! This is the first time I've seen a hornet up close!

Giant Japanese hornets can be very dangerous, and in the summer months it's not uncommon to come across signs and cordoned-off areas warning people away.

Anyone coming to the picnic area, but warned! Don't come near the wasp nest!

And, unfortunately for giant hornets, there is not a “live-and-let-live” mentality in Japan:

I found a hornet's nest underground. I sprayed some bug-killer on it.

Still, Japan, like many other parts of the world, has long had a complicated fascination with the giant Japanese hornet.

This is the first time I've been to the bug museum in a while… Here's a model of a giant Japanese hornet my friend made. It's going to be hot tomorrow so I'll just try to do my best at my part-time job.  ^_^

Some people actually stick up for what is really an amazing insect:

While everyone is afraid of giant hornets, when you see them eating sap from a tree they're actually kind of cute. It's easy to get close to them while they're focusing on eating, and they won't attack. Giant hornets are kind of cool. Just be careful to never go near their nests.

It's also often said that the Japanese giant hornet is considered a delicacy by some people, but it's more likely the insect is considered an exotic food you might only ever try on a dare.

Look at this delicious souvenir I got: a bottle of shochu (a distilled spirit similar to vodka) with two giant hornets inside (the shochu was distilled from honey). We then dared each other to eat it. Apparently giant hornets are an effective medicine against diabetes??? […]

Others have found beauty in the hornet, such as this potter who specializes in some pretty amazing creations inspired by insects and other animals.

I wonder if anyone will be interested in buying this hornet's nest (with giant hornet) ceramic mug?