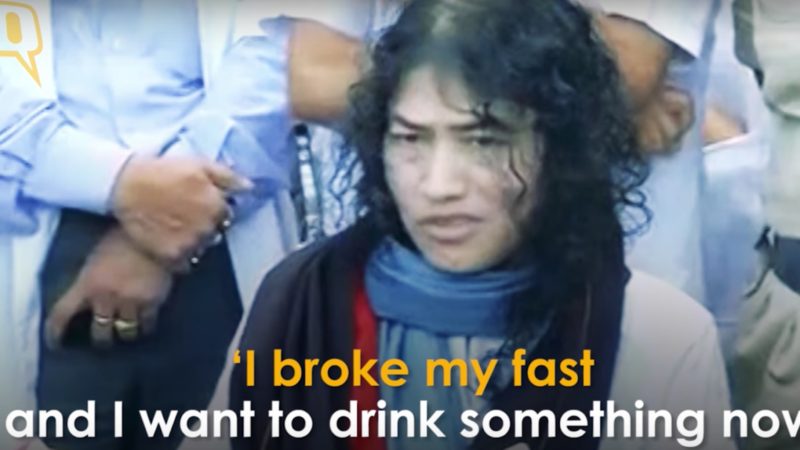 Activist Irom Chanu Sharmila recently decided to end her 16-year-long hunger strike against a controversial draconian law in order to join politics in India's north-eastern state of Manipur and settle down with her boyfriend. While many have cheered her decision and courage (hers was often called the world's longest fast), some of her supporters and fellow activists are not pleased.

Sharmila, 44, had intended to stay in a local Manipur colony after being discharged from the hospital, where she had been kept detained and force-fed through a tube in her nose on the basis of a law that prohibits suicide. But community members rejected her, as did a local Iskcon temple. Police then brought her back to the hospital to stay in the meantime.

Activists from the group Sharmila Kanba Lup (Protect Sharmila Organisation) complain that Sharmila did not consult them before deciding to stop her hunger strike and feel “disappointed” and “let down”. Another group, the Manipuri separatist organization Alliance for Socialist Unity, Kangleipak, urged her not to marry her boyfriend, a British-Indian man, deeming his Indian descent suspicious; some supporters felt that her relationship might have “misled” her into taking this decision.

The cruelty shown to Irom Sharmila is staggering. Like she cant own her own life or choices. Very Opposite of human rights she fought for

Sharmila, also known as the ‘Iron Lady’ of Manipur, started her non-violent protest in November 2000. Her main demand was the repeal of the Armed Forces (Special Powers) Act (AFSPA), which grants government forces de facto impunity in their bid to rein in militants and separatists working in the region.

Many consider her to be a Manipuri icon, and say ending her fast and entering politics could sully that image. Another organization, the Sharmila Kanba Lup (Save Sharmila Campaign), was dissolved after she announced she was going to stop her hunger strike, although it appears to have happened with Sharmila's blessing.

Those who saying that #IromSharmila should have continued her fast are always welcome to take over from her. Any takers?

Addressing the criticism and local rejection she experienced, a pained Sharmila told the press:

At that moment, I felt the best thing for them would have been beating me to death. What is the difference between being beaten to death or dying from fasting. Not much. They want me to remain a martyr forever. But I can’t always be a martyr.

Manu Joseph summarized the situation in the newspaper Hindustan Times:

They said she had betrayed their cause. They had promoted her as “iron lady”, but now she was not behaving like one. Fair-weather friends and family isolated her. People who had made her a deity, now abused her. At least one group threatened her.

India has lost humanity. India is slowly losing hearts of people of North East and Kashmir.

For a better India we must speak up for rights of one and all, we cannot allow the politicians to divide us further.

Shashikumar Velath criticized on Facebook those who had “exploited” Sharmila:

All human rights organizations – national and international – are responsible for creating an icon without thinking through a focused exit strategy. All exploited her struggle to raise the mast of their narrow campaign narratives, forgetting about the suffering of a real human being. They lulled the society to believe that Irom's hunger strike would be a never ending reality show. This is what happens when human rights bureaucracies elevate everything to clinical assessment of violations vis a vis national and international law standards. […]

Indian actor Renuka Shahane offered up his own home and praised Sharmila's efforts:

Irom Sharmila if you have no place that is willing to accept you please stay with me in Mumbai, it will be an honour! All those human rights & anti AFSPA “activists” who were happy & supportive only when you had a tube attached to your nose for force-feeding or only when you were facing the wrath of the State with courage, are not worth a second thought. You are still fighting against AFSPA; you are going to do that with a person whom you have chosen to love & in a manner that you & only you should choose to do. You are so used to dissent. Now, its from within the people you consideted your own. That is more difficult & painful.

Writing on “infotainment” website Arre, Shoma Chaudhury described the injustices that Sharmila is facing on all sides:

Sharmila’s protest should have become a lightning rod in India’s public life. The media should have given it life breath. The State should have acknowledged its moral force and entered a dialogue. Instead, the media has tired of her and the State has worn Sharmila down and leached her protest of its magnetism.

The situation might be different if Sharmila's former supporters would only trust her commitment to repealing the Armed Forces (Special Powers) Act, which she has emphasized:

Nobody told me to start fasting then (November 2000). And I dissuaded others from joining me because I knew how hard it can be on a woman with multiple responsibilities in a conflict-torn land. Why can’t they understand I have not deviated from the goal of getting AFSPA repealed?

And besides that, what Sharmila does in her personal life is purely her choice.