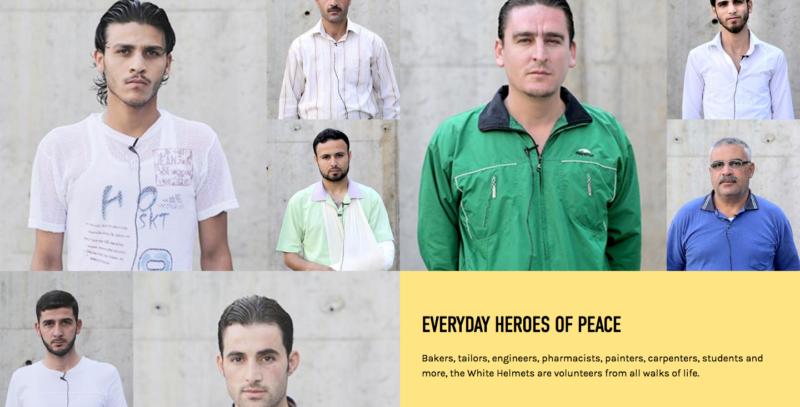 The Syrian Civil Defence Units, also known as the White Helmets, have been nominated for the Nobel Peace Prize. Credited with saving over 56,000 lives and comprising about 3000 volunteers, the group of rescue workers may now receive the world's most recognizable ‘peace prize’ for their work.

In a recent interview with Public Radio International, 29-year-old White Helmet Ishmael Alabdullah gave from Aleppo what could be seen as the White Helmets’ philosophy:

When you see human beings suffering, you need to do something to help them. I consider everyone who is staying in Aleppo, all of them, are heroes.

On their website, the White Helmets explain “what it takes to save a life”:

In the deadliest conflict of our era an unlikely group of heroes has emerged. Former tailors, bakers, teachers and other ordinary Syrians have banded together to save lives from the rubble of bombardment and the violence of war in Syria. Forming the Syria Civil Defence, their distinctive uniform of a white helmet now symbolises hope for millions.

When the bombs rain down, the White Helmets rush in. In a place where public services no longer function these unarmed volunteers risk their lives to help anyone in need, regardless of their religion or politics. These volunteer rescue workers have saved over 60,000 lives.

The White Helmets motto is taken from the Quran: ‘to save a life is to save all of humanity‘. In a conflict where too many have chosen violence, the White Helmets wake up everyday to save the lives others are trying so hard to take.

Their bravery has inspired people across the planet — from the children in Syria who play at being rescue workers, to the students in Norway who awarded them their town’s peace prize, and to their nomination now for the Nobel Peace Prize.

The ‘Nobel Peace Prize for the White Helmets’ campaign is being supported by over 120 organizations. Syrian organizations include:

The White Helmets were nominated by, among others, Jo Cox, the UK Labour member of parliament who was brutally murdered by a 52-year-old man on June 16, 2016. Following Cox's death, her husband Brendan launched a memorial fund set to raise money for causes supported by the late MP. The three causes chosen were the ‘Royal Voluntary Service‘, an NGO which assists the elderly, ‘HOPE Not Hate‘, the movement ‘fighting for a modern, inclusive Britain’ and, finally, the White Helmets.

In just five days, the campaign managed to raise close to £1.35 million (1.7 million US dollars) with over 41,000 contributions and has since surpassed the £1.5 million goal (1.9 million US dollars). Cox's family was even presented with an honorary white helmet by the head of the White Helmets, Raed Saleh, a highly symbolic award as it is “normally reserved for volunteers who have lost their lives rescuing civilians in Syria”. Saleh also released the following video on behalf of the White Helmets.

In March 2016, Amnesty International accused the Syrian and Russian governments of targeting hospitals as a strategy of war, saying that they “appear to have deliberately and systematically targeted hospitals and other medical facilities over the last three months to pave the way for ground forces to advance on northern Aleppo”. In June 2016, The New Yorker's Ben Taub published a harrowing account of what he called ‘the shadow doctors’. He wrote:

In the past five years, the Syrian government has assassinated, bombed, and tortured to death almost seven hundred medical personnel, according to Physicians for Human Rights, an organization that documents attacks on medical care in war zones. (Non-state actors, including ISIS, have killed twenty-seven.) Recent headlines announced the death of the last pediatrician in Aleppo, the last cardiologist in Hama. A United Nations commission concluded that “government forces deliberately target medical personnel to gain military advantage,” denying treatment to wounded fighters and civilians “as a matter of policy.”

Many more hospitals have since been bombed. At least 375 strikes on medical facilities have been documented since the start of the Syrian Revolution, according to Physicians for Human Rights. Under such conditions, many of the men and women treating the wounded in makeshift underground hospitals can range from first year medical students to people with no medical training at all.

Similarly, the first responders comprising the bulk of the White Helmets are ordinary civilians, from bakers to nurses, painters to tailors, which is why supporters of the campaign are asking the public to sign a statement in support of the White Helmets receiving the 2016 Nobel Peace Prize.

Editor's note: This story was updated on August 18 to correct the number of White Helmet volunteers from 130 to 3000.