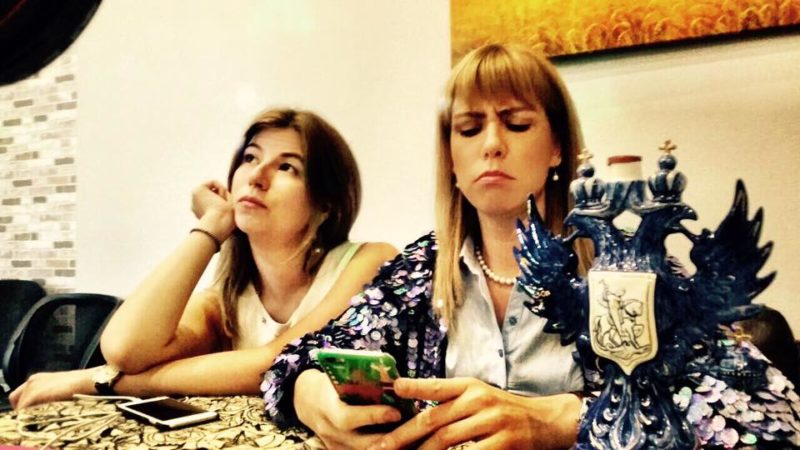 Life.ru, the cream of the crop (or bottom of the barrel, as it were) of Russian tabloid attacks on political figures, has published hacked photographs featuring Maria Baronova, an opposition candidate for the State Duma, in an intimate setting with another young woman.

The website says merely that the images were sent by an anonymous user of its news-crowdsourcing app “LifeCorr.” The photographs show Baronova and her current campaign manager, Polina Nemirovskaya, posing topless and kissing. Baronova has refused to comment publicly about the leaked pictures, but she did apparently tell Life.ru that she'll be happy to “take up the discussion about her chest” just as soon as she's completed her campaign for a seat in Russia's parliament.

Baronova overcame considerable odds earlier this month to register her candidacy, collecting nearly 15,000 signatures to join the ballot as an independent. She is one of 18 candidates supported by the political movement “Open Russia,” which was launched by former oil tycoon, turned political dissident, Mikhail Khodorkovsky. To collect the signatures needed to register her candidacy, Baronova mobilized an army of roughly 400 campaign workers. She has also reportedly taken out a personal loan of 2 million rubles (more than $31,000) to fund her campaign.

Baronova is running for a seat in Moscow's central voting district, where she'll square off against Nikolai Gonchar, a candidate from the ruling party “United Russia,” and Andrei Zubov, who is endorsed by the democratic parties “Yabloko” and “Parnas.” (In March 2014, following Russia's annexation of Crimea, Zubov gained some celebrity among the Kremlin's critics for losing his job after penning an op-ed comparing Moscow's land grab to the Nazi seizure of the Sudetenland.)

The presence of two liberal democrats on the same Moscow ballot has led some of Zubov's supporters to accuse Baronova of being a “spoiler” candidate, allowed into the race by the Kremlin, in order to split the opposition vote. The well-known anti-corruption activist, Alexey Navalny, for instance, suggested on Twitter today that the leaked photos with Nemirovskaya make it “obvious” that Baronova is a “spoiler” sent to keep Zubov from the Duma. (Petr Verzilov, the husband of Pussy Riot frontwoman Nadezhda Tolokonnikova, promptly mocked Navalny for demanding that Baronova drop out of the race.)

While Baronova has remained mostly silent about the leaked pictures, Nemirovskaya hasn't shied from discussing the matter on social media. On Twitter, she revealed that Life.ru contacted her earlier, asking for a comment about the images it received. Nemirovskaya says all her social-media accounts and instant messengers were hacked a couple of months ago. In one tweet today, she posed for a photo beside Parnas chairman and former Russian Prime Minister Mikhail Kasyanov, who early this summer was targeted in a hidden-camera scheme that exposed his extramarital affair with a Parnas staffer.

Just in case, I'll upload my photos with Kasyanov on my own.

The photographs with Baronova, Life.ru apparently told Nemirovskaya, were pulled from an iPhone 4—a smartphone Nemirovskaya says she hasn't used for roughly four years. According to Olga Borisova, one of Nemirovskaya's close friends and another member of Baronova's campaign staff, the photos were taken a year ago. Borisova, who has written for RuNet Echo in the past, declined to elaborate further.

Elsewhere on social media, the Internet's typically sophomoric humor has kicked into overdrive. By a strange coincidence, two other divisive women in Moscow's political culture—Ksenia Sokolova, the new chief editor of Russian Esquire, and Lesya Ryabtseva, a former top aide at the radio station Echo of Moscow—announced that they will be working together in the former's Duma campaign this election. The sudden news about these four women—all of whom are active in public life and have, at one time or another, foregrounded their sense of fashion and physical appearance—has activated all the usual commentary from men on the Russian Internet, who have largely alternated between ogling observations about attractive young women posing for photos together, and generally misogynist jokes about the women in Russia's public spotlight.