Israel, One of the World’s Driest Countries, Is Now Overflowing With Water 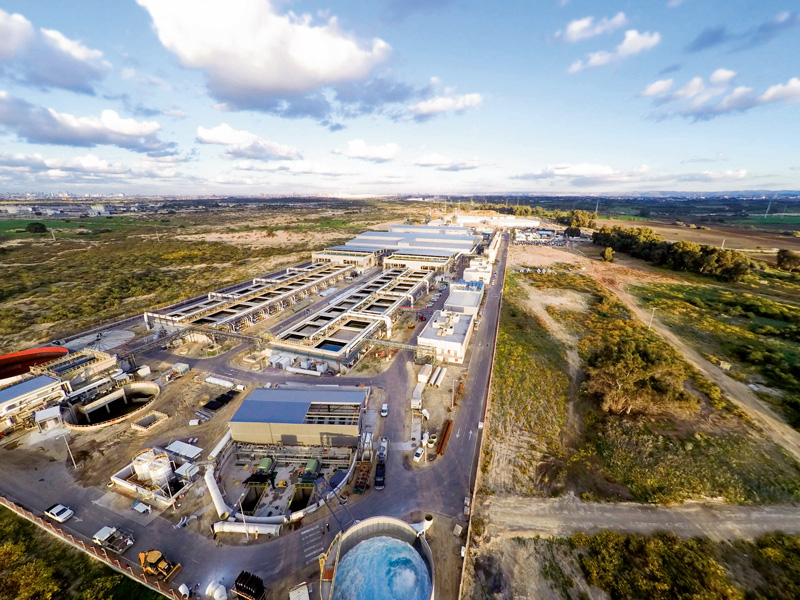 This post by Rowan Jacobsen was originally published on Ensia.com, a magazine that highlights international environmental solutions in action, and is republished here as part of a content-sharing agreement.

Ten miles south of Tel Aviv, I stand on a catwalk over two concrete reservoirs the size of football fields and watch water pour into them from a massive pipe emerging from the sand. The pipe is so large I could walk through it standing upright, were it not full of Mediterranean seawater pumped from an intake a mile offshore.

“Now, that’s a pump!” Edo Bar-Zeev shouts to me over the din of the motors, grinning with undisguised awe at the scene before us. The reservoirs beneath us contain several feet of sand through which the seawater filters before making its way to a vast metal hangar, where it is transformed into enough drinking water to supply 1.5 million people.

We are standing above the new Sorek desalination plant, the largest reverse-osmosis desal facility in the world, and we are staring at Israel’s salvation. Just a few years ago, in the depths of its worst drought in at least 900 years, Israel was running out of water. Now it has a surplus. That remarkable turnaround was accomplished through national campaigns to conserve and reuse Israel’s meager water resources, but the biggest impact came from a new wave of desalination plants.

Israel now gets 55 percent of its domestic water from desalination, and that has helped to turn one of the world’s driest countries into the unlikeliest of water giants.

Bar-Zeev, who recently joined Israel’s Zuckerberg Institute for Water Research after completing his postdoc work at Yale University, is an expert on biofouling, which has always been an Achilles’ heel of desalination and one of the reasons it has been considered a last resort. Desal works by pushing saltwater into membranes containing microscopic pores. The water gets through, while the larger salt molecules are left behind. But microorganisms in seawater quickly colonize the membranes and block the pores, and controlling them requires periodic costly and chemical-intensive cleaning. But Bar-Zeev and colleagues developed a chemical-free system using porous lava stone to capture the microorganisms before they reach the membranes. It’s just one of many breakthroughs in membrane technology that have made desalination much more efficient. Israel now gets 55 percent of its domestic water from desalination, and that has helped to turn one of the world’s driest countries into the unlikeliest of water giants.

Driven by necessity, Israel is learning to squeeze more out of a drop of water than any country on Earth, and much of that learning is happening at the Zuckerberg Institute, where researchers have pioneered new techniques in drip irrigation, water treatment and desalination. They have developed resilient well systems for African villages and biological digesters than can halve the water usage of most homes.

The institute’s original mission was to improve life in Israel’s bone-dry Negev Desert, but the lessons look increasingly applicable to the entire Fertile Crescent. “The Middle East is drying up,” says Osnat Gillor, a professor at the Zuckerberg Institute who studies the use of recycled wastewater on crops. “The only country that isn’t suffering acute water stress is Israel.”

That water stress has been a major factor in the turmoil tearing apart the Middle East, but Bar-Zeev believes that Israel’s solutions can help its parched neighbors, too — and in the process, bring together old enemies in common cause.

Bar-Zeev acknowledges that water will likely be a source of conflict in the Middle East in the future. “But I believe water can be a bridge, through joint ventures,” he says. “And one of those ventures is desalination.”

In 2008, Israel teetered on the edge of catastrophe. A decade-long drought had scorched the Fertile Crescent, and Israel’s largest source of freshwater, the Sea of Galilee, had dropped to within inches of the “black line” at which irreversible salt infiltration would flood the lake and ruin it forever. Water restrictions were imposed, and many farmers lost a year’s crops.

Their counterparts in Syria fared much worse. As the drought intensified and the water table plunged, Syria’s farmers chased it, drilling wells 100, 200, then 500 meters (300, 700, then 1,600 feet) down in a literal race to the bottom. Eventually, the wells ran dry and Syria’s farmland collapsed in an epic dust storm. More than a million farmers joined massive shantytowns on the outskirts of Aleppo, Homs, Damascus and other cities in a futile attempt to find work and purpose.

And that, according to the authors of “Climate Change in the Fertile Crescent and Implications of the Recent Syrian Drought,” a 2015 paper in the Proceedings of the National Academy of Sciences, was the tinder that burned Syria to the ground. “The rapidly growing urban peripheries of Syria,” they wrote, “marked by illegal settlements, overcrowding, poor infrastructure, unemployment, and crime, were neglected by the Assad government and became the heart of the developing unrest.”

Similar stories are playing out across the Middle East, where drought and agricultural collapse have produced a lost generation with no prospects and simmering resentments. Iran, Iraq and Jordan all face water catastrophes. Water is driving the entire region to desperate acts.

Except Israel. Amazingly, Israel has more water than it needs. The turnaround started in 2007, when low-flow toilets and showerheads were installed nationwide and the national water authority built innovative water treatment systems that recapture 86 percent of the water that goes down the drain and use it for irrigation — vastly more than the second-most-efficient country in the world, Spain, which recycles 19 percent.

The country faces a previously unfathomable question: What to do with its extra water?

The Sea of Galilee is fuller. Israel’s farms are thriving. And the country faces a previously unfathomable question: What to do with its extra water?

Inside Sorek, 50,000 membranes enclosed in vertical white cylinders, each 4 feet high and 16 inches wide, are whirring like jet engines. The whole thing feels like a throbbing spaceship about to blast off. The cylinders contain sheets of plastic membranes wrapped around a central pipe, and the membranes are stippled with pores less than a hundredth the diameter of a human hair. Water shoots into the cylinders at a pressure of 70 atmospheres and is pushed through the membranes, while the remaining brine is returned to the sea.

Desalination used to be an expensive energy hog, but the kind of advanced technologies being employed at Sorek have been a game changer. Water produced by desalination costs just a third of what it did in the 1990s. Sorek can produce a thousand liters of drinking water for 58 cents. Israeli households pay about US$30 a month for their water — similar to households in most US cities, and far less than Las Vegas (US$47) or Los Angeles (US$58).

The International Desalination Association claims that 300 million people get water from desalination, and that number is quickly rising. IDE, the Israeli company that built Ashkelon, Hadera and Sorek, recently finished the Carlsbad desalination plant in Southern California, a close cousin of its Israel plants, and it has many more in the works. Worldwide, the equivalent of six additional Sorek plants are coming online every year. The desalination era is here.

What excites Bar-Zeev the most is the opportunity for water diplomacy. Israel supplies the West Bank with water, as required by the 1995 Oslo II Accords, but the Palestinians still receive far less than they need. Water has been entangled with other negotiations in the ill-fated peace process, but now that more is at hand, many observers see the opportunity to depoliticize it. Bar-Zeev has ambitious plans for a Water Knows No Boundaries conference in 2018, which will bring together water scientists from Egypt, Turkey, Jordan, Israel, the West Bank and Gaza for a meeting of the minds.

Even more ambitious is the US$900 million Red Sea–Dead Sea Canal, a joint venture between Israel and Jordan to build a large desalination plant on the Red Sea, where they share a border, and divide the water among Israelis, Jordanians and the Palestinians. The brine discharge from the plant will be piped 100 miles north through Jordan to replenish the Dead Sea, which has been dropping a meter per year since the two countries began diverting the only river that feeds it in the 1960s. By 2020, these old foes will be drinking from the same tap.

On the far end of the Sorek plant, Bar-Zeev and I get to share a tap as well. Branching off from the main line where the Sorek water enters the Israeli grid is a simple spigot, a paper cup dispenser beside it. I open the tap and drink cup after cup of what was the Mediterranean Sea 40 minutes ago. It tastes cold, clear and miraculous.

The contrasts couldn’t be starker. A few miles from here, water disappeared and civilization crumbled. Here, a galvanized civilization created water from nothingness. As Bar-Zeev and I drink deep, and the climate sizzles, I wonder which of these stories will be the exception, and which the rule.

Rowan Jacobsen is the James Beard Award–winning author of Fruitless Fall, The Living Shore, Shadows on the Gulf and other books. He is a frequent contributor to Outside, Harper’s, Mother Jones, Orion and other magazines, and his work has been anthologized in Best American Science and Nature Writing and other collections. His new book, Apples of Uncommon Character, will be published in September. He tweets from @rowanjacobsen.