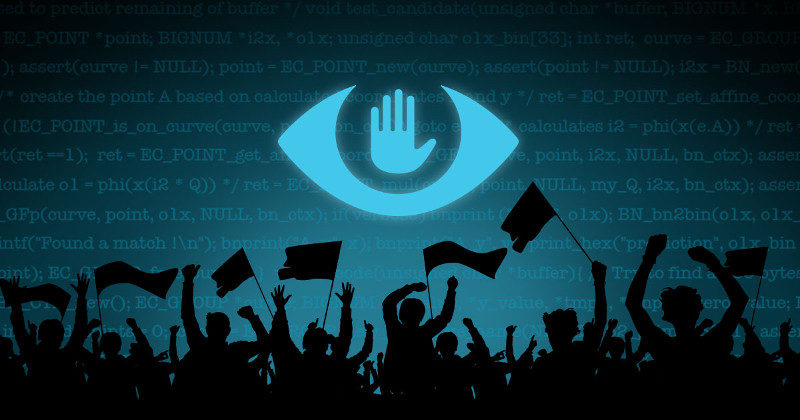 Banner for The Day We Fight Back anti-surveillance campaign from February 2014 has been adopted by activists campaigning against Russian anti-terror laws. Image from Wikipedia.

An online petition launched by Russian activists to protest the repressive anti-terrorism laws has gathered over 100 thousand signatures in just 36 days, and is now slated to be considered by Russian federal regulators. Authors of the petition on the Russian Civic Initiative (ROI) website say the laws further restrict free speech in Russia, curtail civil liberties and threaten online freedom on the RuNet, and must therefore be repealed.

The organizers behind the overall protest effort, including the Society for Protecting the Internet and the RosComSvoboda Internet freedom group, object to increasing levels of state surveillance that they say the laws enable by demanding that ISPs and online businesses store six months worth of user traffic data, including messages and calls. Signatories to the petition expressed solidarity with Russian ISPs and mobile providers who previously have said that the Yarovaya laws (named after one of the authors of the amendments) will lead to deteriorating Internet quality and more expensive online access, and will hamper network development in Russia, hurting both the industry and the users.

Petitions on the ROI website that collect over 100 thousand signatures are officially recognized by the federal government, as the signatures are verified through personal accounts on the Russian state services portal. However, there is no guarantee that a particular issue will be greenlit for consideration in the parliament by a group of relevant federal experts. Nevertheless, the activists see the petition as a successful instrument of “electronic democracy” and a kind of “public loudspeaker” that will allow to raise awareness of the dangers posed by the new laws.

On August 9, Russian opposition forces and Internet freedom activists also organized and held a rally in Moscow's Sokolniki district to protest against the laws. According to independent observers, a little over two thousand people showed up for the rally.

Speakers at the rally included opposition politician Alexey Navalny, leader of RosComSvoboda Artyom Kozlyuk, and Leonid Volkov, Navalny's political ally and head of the Society for Protecting the Internet, a new initiative aimed at safeguarding online freedoms in the RuNet. Independent online video platform Newscaster TV, which often broadcasts from protest rallies in Russia, streamed the rally live on YouTube, and later made a recording of the event available online.

The rally had initially been scheduled for July 26, but Moscow authorities denied the organizers permission to hold the event. It was later rescheduled to August 9 and moved to a less central location in Sokolniki.

In a Facebook post, Leonid Volkov explained why he thought both the petition and the rally, though organized after the laws had been passed, still made sense and were important steps in battling against new repressive legislation.

…this is a continuation of the strategy we discussed at the rally on August 9: not to let the “Yarovaya package” disappear from the information agenda, not to let it dissolve and be forgotten. To keep creating new, varied pressure points and news pegs around it. So far, we're doing great and thank you so much for that!

The “Yarovaya” laws were signed by President Vladimir Putin on July 7, 2016, and introduce a broad spectrum of amendments restricting civic activities and online expression in Russia, as well as boosting the state's surveillance powers.