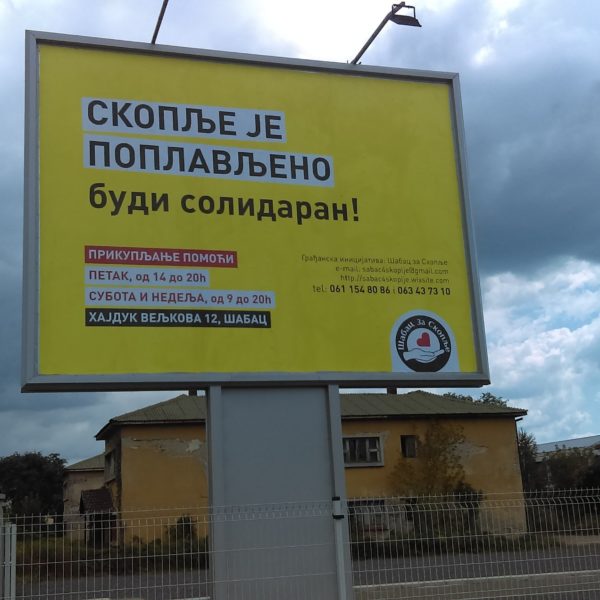 “Skopje's Flooded, Show Solidarity!” Within days of the Skopje flood, volunteers in Šabac called upon their fellow residents to join the relief effort. Photo by @maliremorker, used with permission.

A few days after a deadly flood hit Macedonia's capital Skopje, residents of the Serbian town of Šabac organized a food and supply drive.

Their solidarity wasn't random. Šabac was one of the worst hit during the floods of May and April 2014, when large parts of Serbia and Bosnia and Herzegovina were affected. Neighboring countries including Macedonia provided a massive amount of donations in supplies at the time, as well as volunteer labor.

“Citizens of Šabac, Loznica, Bogatić, Koceljeva, Vladimirac, Krupanj and other cities/municipalities, it is time! Show solidarity to Macedonia and the city of Skopje! We won't forget their aid in 2014!
Gathering of aid on [Friday, Saturday and Sunday] at Hajduk Veljko Street 12 in Šabac.
Recommended donations: hygiene and disinfection utilities, diapers, canned food for children and adults, pasta, underwear, socks, clothes, blankets, sleeping bags, tents. Don't bring money or medicines.
For more information call 061/154-808 and 063/43-73-10
Citizens of Šabac supported by Association Svetlost (Light) and European Environmental Centre “

According to the drive's organizers, even though it was a holiday season weekend, a time when not too many residents are in town, they managed to gather a van of supplies, which will be sent to Skopje in a couple of days. The drive will continue until the end of the crisis.

Skopje, the ‘city of solidarity’

Times of crisis bring out the best and the worst in people. In Macedonia, some have been trying to divert attention from the issue of who's responsible for flood prevention and the authorities’ insufficient response by stoking the flames of ethnic hatred. For instance, a pro-government media outlet (funded with ads from public enterprises such as Skopje Waterworks and Sewage) published an article titled “Where are ‘brothers Serbs’ now, to donate a package of water and food for the flooded families?”

In fact, during the week after the floods, all Balkan states, as well as the European Union and some of its members, provided aid in funds or with rescue crews. Not to mention the residents of Šabac's own efforts.

It's certainly not the first time Skopje has been the recipient of aid. In the past, it was known as the “city of solidarity” because it was rebuilt with international aid from scratch after the devastating earthquake of July 27, 1963. This aid included contribution from both Western and Eastern blocs, temporarily putting aside the Cold War animosities.

In recent years, around that date, Macedonian Twitter users have published photos, films, or songs from that time with the hashtag #СкопјеСеСеќава (“Skopje Remembers”).

For instance, during last year's July Twitter user Yokio San, posted a selection of quotes from a book about 1963:

“Skopje must not remain merely a newspaper report of its first sufferings, but must be the responsibility of all of us, of all men who today or tomorrow, through some similar new catastrophe, may become Skopians” – Alberto Moravia, 1963.

“Skopje is not a film, not a thriller where we guess the chief event. It is a concentration of man’s struggle for freedom, with a result which inspires further struggles and no acceptance of defeat.” – Jean-Paul Sartre, 1963.

“My parents told me that Skopje has no schools now. The children have nowhere to study. I did not go to amusement park yesterday. Instead, I used that money to buy some pencils, notebooks and rubbers and I am sending them to you — to a student from Skopje. My parents advised me not to sign this note.” – A pupil from Amsterdam, 1963.

“Skopje suffered an enormous catastrophe, but we shall rebuild Skopje again. With the help of all our community, it will become our pride and a symbol of brotherhood and unity, of the  Yugoslav and world solidarity.” – Josip Broz Tito, July 27, 1963.

“This visit enabled me to witness the international solidarity in Skopje which followed the catastrophe seven years ago. I am convinced that such human communication can instigate larger and more efficient international cooperation between countries, cities and villages.” – U Thant, UN General Secretary, 1970.