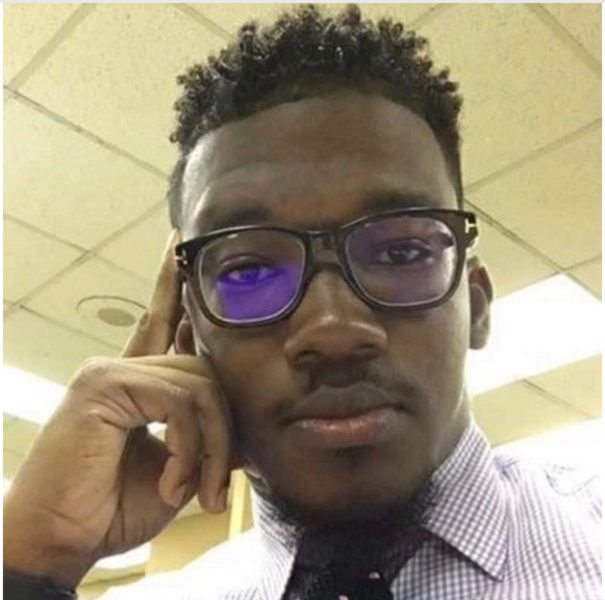 Screen grab of a selfie by Maurice Ramirez, whose employer claims that his hairstyle is not in keeping with the company's Uniform and Dress Code Policy.

A letter to an employee from the human resources department of a major insurance firm in Trinidad and Tobago warning him over his “unprofessional” hairstyle is making waves on social media.

The subject of your unprofessional hairstyle was repeatedly addressed. You were asked […] to comply with the Company's policy as it relates to professional image. […]

I refer you to our Uniform and Dress Code Policy Section 8, which states that “Hairstyles and hair colours must be conservative. Hair should be kept clean, neat and well-groomed.

[…] Please be advised that failure to comply will result in further disciplinary action being taken, up to and including termination of services.

Ramirez, who is black, uploaded a selfie — along with a photo of the letter — to his Facebook page.

He has since deleted the post, but it had already gone viral. While some social media users were asking about the backstory, many netizens took up the employee's cause on the basis of those two images, flooding the company's Facebook page with critical comments, some of which were allegedly deleted.

Race is a protected characteristic under the laws of Trinidad and Tobago's Equal Opportunity Act. It is also protected under international labour customs and treaties. This is foolish. He is a man of African descent with black hair. Does Colfire insist that the Indian men or white men employed at the organisation cut their hair or is it that their hair is inherently acceptable while black hair is inherently unacceptable?

Umm we have a rasta hairstyle in Parliament. Colfire find they more formal than Parliament?

The blog Teenlink suggested that employers “have a loophole”:

Employers can include in their employee handbooks what hairstyles are appropriate for their work space. However, some hairstyles put some women, and men, at a disadvantage because it does not allow them to wear their hair in a more natural form. […] Hair that is worn naturally is more likely to affect a qualified candidate’s chances of being hired than their straight haired counterparts.

Race relations in the multi-ethnic country can be complex. Trinidad and Tobago's colonial era was socially, economically and politically dominated by the white elite — but there soon grew a coloured and black middle class that would forge the country's future. In 1970, there was a Black Power revolution aimed at changing the social status quo not just for blacks, but for the Indian population, which was initially brought to the country to serve as indentured labourers post-emancipation. A memorable event during the protests of that time was a march through central Trinidad aimed at uniting the two races, but nearly a half century later, there are still racial tensions, stereotyping and tribal politics.

Antineil Tristan Blackman couldn't help but see the irony in the fact that the leader of Trinidad and Tobago's Black Power Revolution — who recently passed away — was being honoured, while this type of alleged discrimination still exists, some 46 years after the late Makandal Daaga marched to demand racial equity:

COLFIRE makes me sick to my stomach
To see something appear like this close to death of Daaga is very heart breaking.

She wasn't the only one who felt that way. In a public post, Darryl Popwell said:

There were even memes being shared about it: 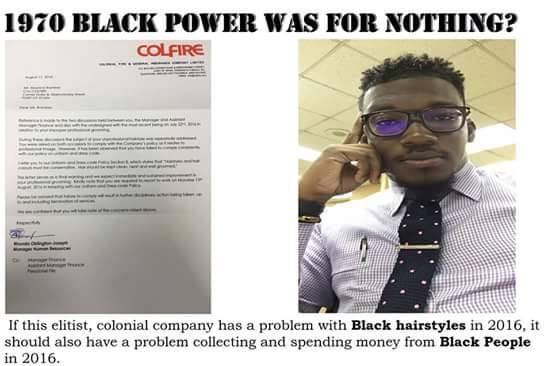 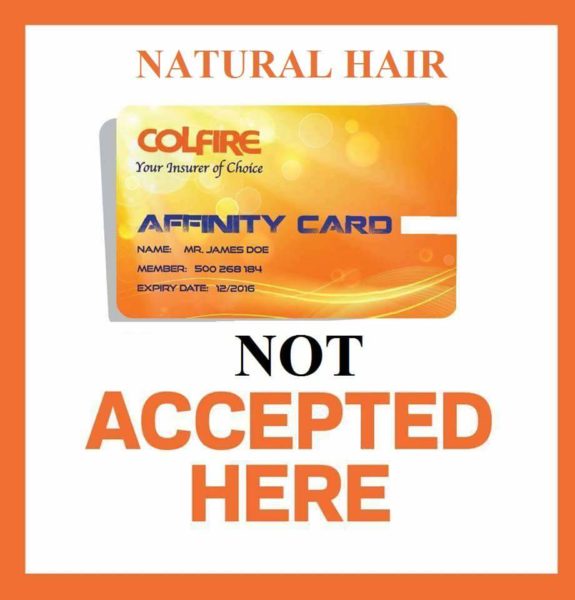 A meme making jabs at the company's new rewards card is being widely shared on Facebook.

One weave-themed graphic by artist Darren Trinity Cheewah seemed to sum up the online sentiment: 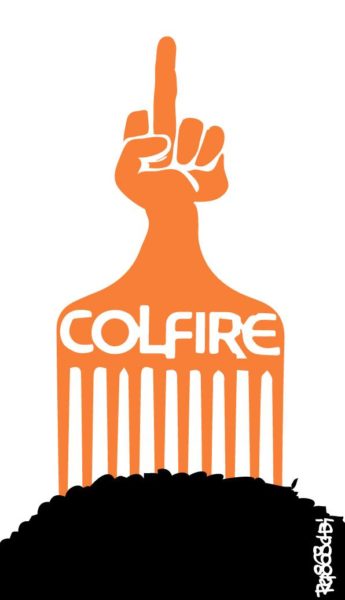 Graphic by Trinidadian artist Darren Trinity Cheewah that is being shared on Facebook.

Facebook user Rhoda Bharath, who is a COLFIRE customer, decided to take action by contacting the company, encouraging others to do the same.

She said that one of the company's executives confirmed “the board is currently in a meeting and will issue a statement on the letter sent to Mr Ramirez by the end of today”.

As promised, the company did release a statement on the matter via its Facebook page: 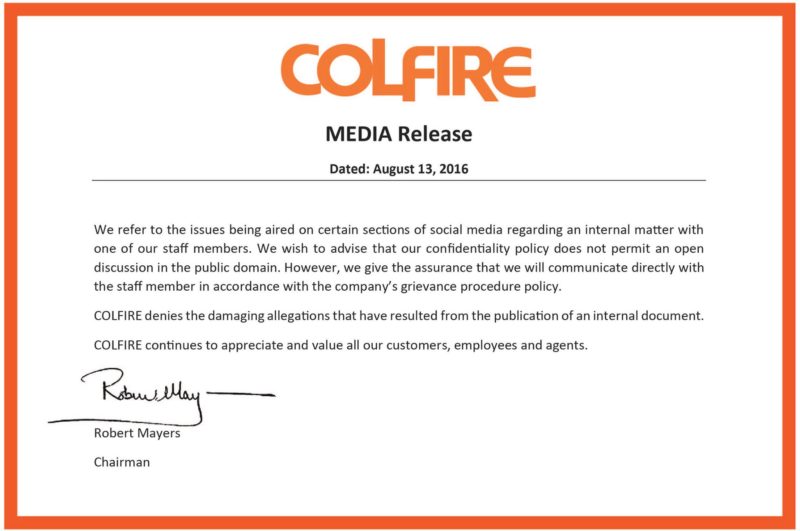 Screen grab of the COLFIRE media release being shared on social media.

We refer to the issues being aired on certain sections of social media regarding an internal matter with one of our staff members. We wish to advise that our confidentiality policy does not permit an open discussion in the public domain. However, we give the assurance that we will communicate directly with the staff member in accordance with the company's grievance procedure policy.

COLFIRE denies the damaging allegations that have resulted from the publication of an internal document.

COLFIRE continues to appreciate and value all our customers, employees and agents.

On Twitter, the response got criticised for its tone. Bharath maintained:

How a person wears his/hair [sic] hair is not an internal matter Colfire.
Soon you will want to dictate weight, hair colour and lightness of complexion.
Poor form.
‪#‎ColfireStorm‬

The court of social media

The negative attention continued to grow, with customers threatening to move their business, social media users calling the company's stance “colonial” and others suggesting a boycott of the firm, should the situation not be amicably resolved.

Some lobby groups and activists threw their support behind Ramirez on Facebook, but other netizens were more cautious.

Sounds like something else is going on and they're using this as an excuse to fire him.

Barbs Winey was firmly on the side of the insurance company:

You have a problem. You're battling your employer over some issue and you feel very strongly about your position.
Instead of trying to obtain professional advice on the issue, you post to social media, so that your friends can adjudicate on your issue without knowing all the facts. You know that your post will be shared and liked and retweeted and get attention.
Right or wrong, that's how things get done in 2016: Facebook, Ian Alleyne* and ‘putting them on blast’.

Ian Alleyne is a local television personality who hosts Crime Watch — a controversial show in Trinidad and Tobago that has, in the past, made some questionable decisions about airing sensitive content. “Putting on blast” means publicly calling out or humiliating someone in an embarrassing way.

Saying that Maurice Ramirez should not have exposed the prejudiced practices of Colfire on social media is like saying a domestically abused person should only talk about the abuse with the abuser.
Stop the illogical arguments.
‪#‎MissMeWithTheBullshit‬
‪#‎ColfireWithTheGoodHair‬
‪#‎ColfireStorm‬

‘Either way this is an embarrassment to the organization’

In Trinidad and Tobago, the Equal Opportunity Act 2000 prevents employers from discriminating against employees “because of their status and also from discrimination by victimisation whereby the person victimised is less favourably treated that other persons.”

There has been precedence in the local courts for situations like this.

Back in 1995, there was a case in which the management of a commercial bank wanted one of its male tellers to cut his long hair; he refused, took them to court and won.

It is not unusual for companies to have policies that prohibit staff from sporting trendy hairdos or fashion fads — but in a 2005 newspaper interview, The Employers Consultative Association noted that employees’ hairstyles should be less important than their performance.

At present, no details are known about Ramirez’ performance at the job. Journalist and Facebook user Vernon O'Reilly Ramesar warned about jumping to conclusions:

All rise…the court of public opinion is in session. The full story be damned. I wish people could wait to see both (or even multiple) sides of a story. This applies to just about everything spreading on social media. Think before disseminating.

I don't know the entire story but either way this is an embarrassment to the organization. Don't confuse personal agendas with policy.

Most social media users view this as a case of an employee being policed for his choice of hairstyle, and several doubted Colfire could win a discrimination case.

Caribbean Man wrote on Facebook regarding the company's preference for “conservative” hair:

“Conservative” is very subjective and in no way is a definitive statement. Same should have been accompanied with pictures of what constitutes a professionally groomed hair.
That letter and the ink it was written with is not worth shit in the industrial court.

Meanwhile, Abeo Jackson, another Facebook user, predicted the controversy could continue to rage.

The only correct response is a reprimand, a retraction and a public apology. Also making courses on international human rights and diversity relations as well as dealing with diversity in the workplace mandatory. Anything else and the firestorm will continue…