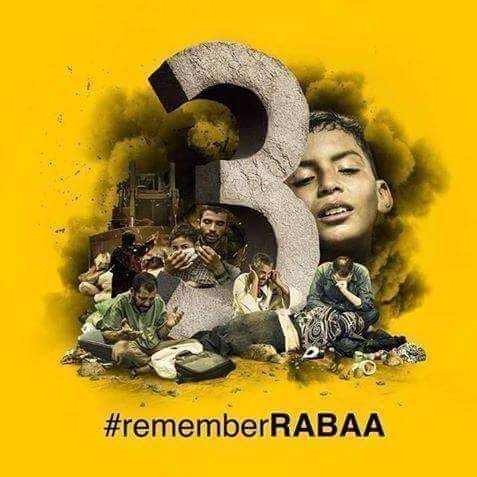 Viral graphic commemorating the third anniversary of the Rabaa massacre. Shared on Facebook by Peter Youssef.

I studied at a campus where I used to hear gunfire more often than the hustle of freshman students. The sight of army snipers with their firearms is as familiar to me as the loud chants of protests under the dome of Cairo University.

I entered the Faculty of Economics and Political Science eight months after the start of the Egyptian revolution. At a time of historic change, Cairo University had been home to a large and diverse politically-oriented student body. It was a maquette of the tense political scene in the land of pharaohs.

Never had I witnessed such a wrathful atmosphere of political tension and student-driven protests as the one that prevailed in the aftermath of the Rabaa el Adaweya sit-in dispersal, now called the Rabaa Massacre. I saw live bullets being fired at the main gate, ambulances on campus, and massive amounts of tear gas thrown at the marchers condemning the Egyptian security forces’ bloody actions at Rabaa el Adaweya Square.

Early on the morning of August 14, 2013, a state of emergency was declared across Egypt as security forces violently broke up sit-ins organized by Muslim Brotherhood supporters protesting the ouster of Mohamed Morsi, Egypt’s first freely elected president and a former high-level official in the Muslim Brotherhood, leaving up to 1,000 people dead in one day. The sit-in at Rabaa el Adaweya Square was the largest sit-in to be raided. As the shooting took place, armored bulldozers were on site and helicopters circled over the scene. 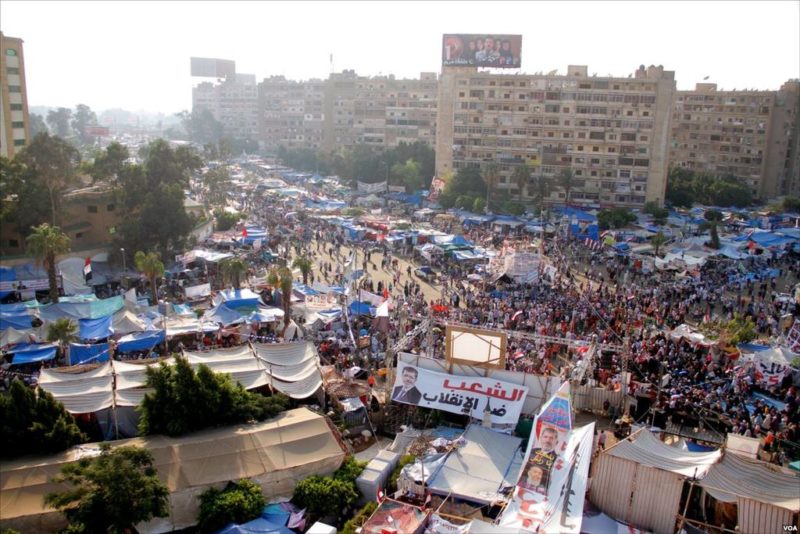 The area around the Rabaa Adiweya mosque on August 1. The area was packed with Muslim Brotherhood supporters who had been sleeping in tents for over a month. Families brought children to protect them from the police forcibly dismantling the sit-in. PHOTO: H. Elrasam for Voice of America, via Wikimedia Commons

It was a war zone.

I wasn’t there, but I saw the footage. I saw pictures that were carved in my memory the moment I laid my eyes on them. Pictures of burnt tents, of clothes stained with blood, of crying mothers. I saw a young girl weeping on her brother's chest, witnessing his last breath.

I wasn’t there, but I saw my best friend weeping over her cousin who was shot in the neck. I remember her shaking voice over the phone saying they couldn’t find his dead body among the others. I remember the sound of the cries around her.

I wasn’t there, but I saw the rows of corpses laid out in white coffins, awaiting collection by relatives, in a Cairo mosque. It looked like a cemetery. It looked like a charnel house in the aftermath of a battle where blocks of ice covered the bodies and they sprayed air freshener to cover up the stench of decay.

I wasn’t there, but I saw a mother examining the faces of dead people at a morgue, looking for her son among the burnt and shot bodies.

I wasn’t there, but I received news of my classmate who was gunned down while escaping from the southern area of the camp.

Back then, I was there.

I was there watching members of the media blessing these acts of murder. Blessing tyranny, oppression, and the mass extermination of those who did not conform to intolerant political agendas. I was there when the murdered were called “terrorists” and the murderers became the “saviors”.

I lived it all.

The square now looks like a typical bustling Cairo scene. Today, nobody remembers that not so long ago they had to cross through sniper fire to reach the other side.

The sound of bullets echo in my ears whenever I pass by this area. The dull and reckless scene of crowded cars rekindles the memory. It reminds me of inhaling tear gas, and that statue of the two hands representing the police and the army looks like it is covered in blood.

All my thoughts are with the victims of the Rabaa Massacre. The smell of death still lingers.