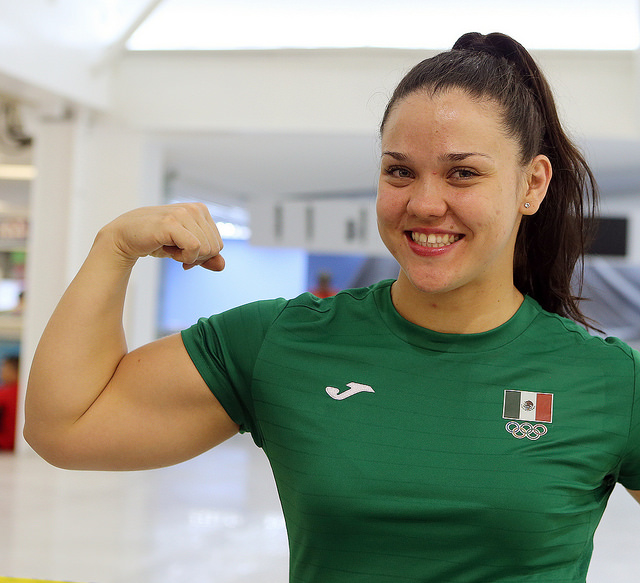 A third of the Games is over and the medal count for the Mexicans is as poor as it could possibly be: zero.

Even in sports where promising Mexican athletes were participating, such as archery, synchronized diving and boxing, competitors have been eliminated before the final rounds.

Netizen Armando Rodríguez pointed a finger at the head of the National Commission for Physical Culture and Sport (CONADE):

Watching Mexico's terrible performance in #Rio2016, what justification will “the fireman” (or the jack of all trades) have @ACC_Castillo, president of @CONADE?

The members of the men's football team have borne a lot of the criticism after making a poor fist of their Olympic championship defense by getting eliminated at the group phase following a defeat to South Korea.

Who should be held to account for the elimination of the olympic Tri in @rio2016_es? everyone, directors, team owners, and puffed up players. #Mexico

In the case of gymnast Alexa Moreno, comments concerned not only her poor performance and subsequent elimination, but her appearance as well.

But there are others who have came to Moreno's defense, claiming the criticisms as misogynistic.

Ayesha Borja on her Facebook profile made the following remark regarding an entry on Buzzfeed that compiles a series of comments made about the gymnast's physique:

Goddamit, I was here chilling and having a drink when I read this. You disgust me, seriously, your “it's a joke” grosses me out, I don't give a shit about people with no morals, with small brains and no heart. Alexa: you are an amazing woman, a country that applauds its misogynistic assholes, that enjoys discrimination and racism and that doesn't give you credit for your effort, doesn't deserve you. It makes me so angry.

The Twitter user Lisse also came out in favour of Moreno:

#AlexaMoreno She is not fat, whoever criticizes her for that just wait and try and get through one of her training sessions 👊.

Pictoline posted their response in a graphic which sums up the counter-criticism well: “Many are criticizing the Mexican athletes for their poor performance in #Rio2016.  But the problem goes a lot deeper.” 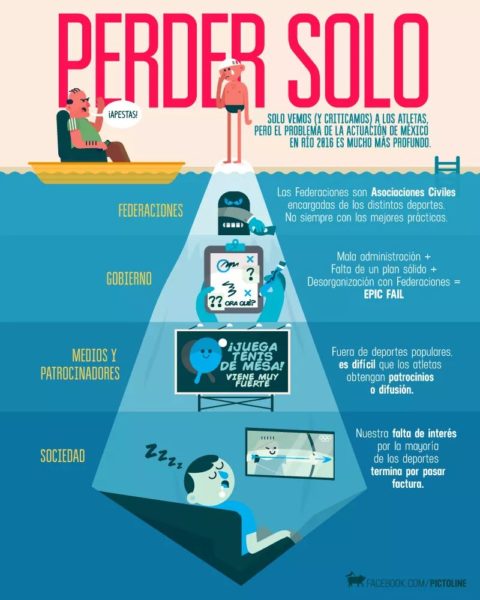 We only see (and criticize) the athletes. But the problem with their poor performance in #Rio2016 goes a lot deeper.

In addition to criticism, humorous comments made the rounds when netizens on Twitter made fun of the questionable green colour of the water in the diving pool, one of the events where Mexicans were hoping for good results:

Isn't the water of the diving pool like “green Xochimilco”?  #Clavados #Rio2016

[Note: Xochimilco is a region of the Mexican capital where there are canals with dark green water.]

I say that we should keep supporting those who are playing such an important part in #Rio2016 despite (and frequently against) @CONADE and @COM_Mexico nest of corruption.

Even if that means supporting representatives from other countries…

We should also put our rank nationalism on hold for a while and support teams like brotherly Honduras who are showing courage.

In London 2012 the total medal count for the Mexican delegation was seven — only one of them gold — leaving the country in 39th place in the medal standings.

In Beijing 2008 they won three. Technically, athletes representing Mexico still have time to better both of those displays but it will take some impressive performances to lift the fog of sporting skepticism that has descended over the country.

For more on the Olympics, see In Mexico, Rio 2016 Will be Broadcast on Digital Media, Shutting Off Open TV or check out our special coverage page: Joy, Disappointment and Injustice at the Rio Olympics.