Malena, Martín and the ‘Guagua Transhumante’ on their way through Peru. Photo shared publicly on Facebook.

With cameras in hand, two young Argentinians are traveling around Latin America and documenting the integration of education into community life, also known as the popular education movement.

Popular education was born in Latin America in the 50s. The discipline is “grounded in notions of class, political struggle, and social transformation.” Popular education advocates believe in teaching in the social context of the community, by creating spaces for dialogue, meeting and reflection. In popular education set-ups, everyone educates everyone by generating popular and collective knowledge.

The two Argentinians behind this ambitious project are Malena and Martín. They are popular education advocates and are publishing their journey in a live digital documentary called Education in Motion. Malena and Martín started their journey about a year ago, and have been through Argentina, Brazil, and Mexico, Peru, Venezuela, Ecuador, and Colombia. We began to tell their beautiful journey a month ago in the article linked below.

Read: Two Argentineans Travel Throughout Latin America Looking for ‘The Other Education’

Since then, in southern Colombia, they interviewed people participating in community projects focused on climate change education, and in Ecuador, they met indigenous leaders who said their community education projects were threatened by the federal government's recent “education revolution.”

Who are Malena and Martín?

Malena is a sociologist and circus performer. She is part of the social organization Ñanderoga, located north of Buenos Aires, where she works as a popular high school teacher. According to her, Ñanderoga is “a pedagogical-political project rooted in the reality of a neighborhood beat up by the injustice of the system, but back on its feet and with the conviction to work and fight for a more just country for all men and women.” 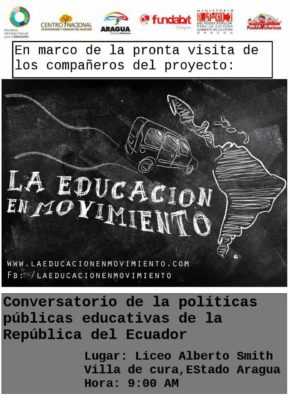 Martín is a teacher at the University of San Martín Technical College in Buenos Aires. About his role in popular education, he said: “Years ago I decided to dedicate my life to the neighborhoods where life is difficult. I organized the construction of social organizations that sow the seeds of other meanings, that allow us to see more deeply, something that we always leave for utopia.”

Their vocation and passion for quality education brought them to work with social organizations like Ñanderoga in search of a new cooperative and academic vision that reaches the most excluded areas. With the certainty of not being the only people working on this process of change, the idea of a touring Latin America to document each of these social movements and their educational proposals that resist the imposition of traditional education began taking shape. The journey is also an inspirational experience that allows them to experience different cultures and open their minds to all aspects of these communities and not only to their educational proposals. As Malena explains:

Why travel? Because traveling connects you with other realities. It moves you and makes you grow. Because, although education, like almost all areas of life, breeds sexism and gender stereotypes that weigh on our bodies, many of us are organizing and constructing other ways of educating and connecting. We’re traveling to get to know them, live them, and share them.

In March, 2016, upon arriving to southern Colombia, the travelers happened to run into the Pedagogical Parade celebrating 45 years of CRIC‘s fight. The Regional Indigenous Council of Cauca (CRIC) is an organization that assembles more than 90% of the indigenous communities in Colombia's Cauca region. Their main objective is to reclaim the autonomy for their people, the sovereignty of their land and the cultural, social, political and economical rights of the indigenous community, and also push the State to consolidate, finally, their Own Indigenous Educational System (SEIP) which already has more than 400 schools.

An excellent example of these schools is the Comunidad Educativa ‘Vueltas de Patico’ (Patico Laps Educational Community), which is directed at “Food Sovereignty and Climate Change” and carries out teaching activities like a school vegetable garden, planting nursery, the development of community cooking recipes, an annual selection of a student council and an original didactic game that encapsulates the lessons in a lucid and fun format.

Outside education has told us that getting your hands dirty means you're poor. […]

Education (traditional or from the outside) whitewashed our thoughts, reset our minds, it didn’t work for us. Western education was an obstacle.

What we want now in our own education is to strengthen, to recuperate once again what we lost. First the history that was erased from our minds and to strengthen our cultural processes.

In Colombia, the connection between the trade unions and the social movements that seek to construct popular education for a popular economy is growing, as in the case of ASOINCA, la Asociación de Institutores y Trabajadores de la Educación del Cauca, [the Cauca Education Association of Professors and Employees] who’s union leader talked in a brief interview about the 16 years the trade union worked with the community of the department.

During the Rafael Correa administration, Ecuador established the foundation for its “education revolution,” which has served as an important investment in the new Unidades Educativas del Milenio (UEM) (Educational Units of the Millennium). They have very modern schools, fully equipped with the latest technology, communal libraries, laboratories and sports fields, with elevated standards of teaching professionalization and a participatory teaching model that guarantees free access to “quality” education for all Ecuadorians.

Education in Motion created various clips and interviews in order to demonstrate the different perspectives about the project:

When I came over to this unit, I already felt a little different because of the infrastructure that exists here, and the classrooms and everything else were a higher quality. And since they’re providing all of this service quality for me, well, I also should show more respect, more responsibility and more dedication towards my studies.

However, the construction of these schools has encountered opposition from some rural and indigenous sectors because the new system is said to absorb and eliminate numerous bilingual and intercultural schools that the indigenous movements had fought to create.

To complete the analysis of the pros and cons of the educational revolution in Ecuador, you can watch the interview with the Ecuadorian Vice Minister of Education, where he talks in detail about the historic change in the educational politics of the country; and another interview with Blanca Chancosa, indigenous mentor to the CONAIE and ECUARUNARI, who shares her point of view about the UEM and emphasizes her worry for education with identity instead of the “preparation of a workforce qualified to work in businesses.” 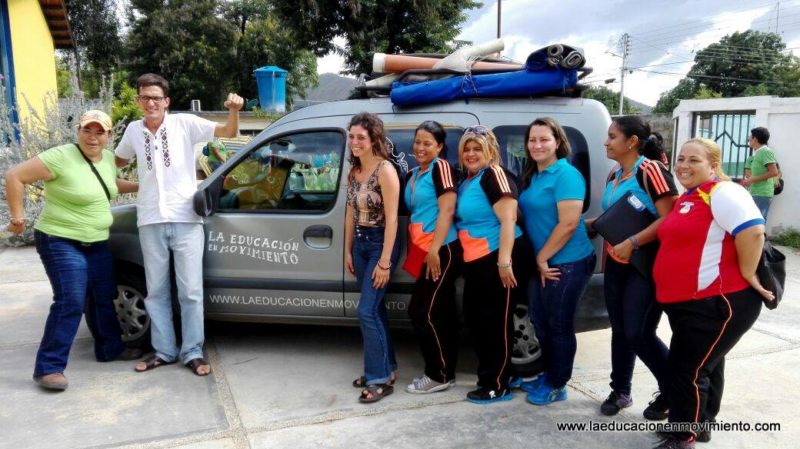 Just arrived to Aragua, Venezuela. “There are no words to describe our appreciation for the warm welcome we received from our friends at the Pedagogical Movement.” Photo shared publicly on Facebook

On August 15, it will be one year since they began this adventure, one year of touring Latin American roads, rivers, towns and communities. Although the journey is not over yet, they are already satisfied to have completed part of their main objective. Many of the videos on their website have been used in analysis and reflection at seminars, meetings, workshops and lectures at different Latin American organizations and universities that stay in contact with them and follow their journey in anticipation of new information.

It makes us happy and excited to know that the clips produced along the way are material for discussion and reflection for friends of Our America!

Education in Movement is a self-managed project that functions thanks to the support of partners, collaborators, and friends. By following this link, you will find the ways in which you can contribute to the project’s success. You can also check out the project's Facebook page for a journal of photos and stories.