‘Limited Bandwidth': Where Is the Reporting on Kashmir? 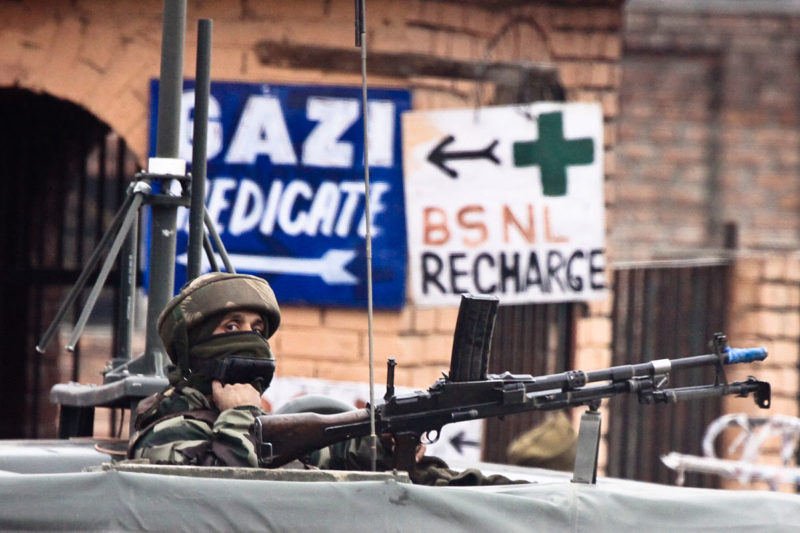 A soldier guards the roadside checkpoint outside Srinagar International Airport in Jammu and Kashmri, January 2009. The latest wave of unrest in the region began in July. PHOTO: Jrapczak – Own work, CC BY-SA 3.0.

Last week a US-Kashmiri teenage girl wrote an open letter to Indian prime minister Narendra Modi that was reported by the Times of India:

“Mr PM, I see the newsflash, the attack in Nice, France, is screened followed by the attempted military coup in Turkey, along with the report on the monsoon rains in southern India. But where is the news on Kashmir? Is this why I never knew what was going on in my hometown for such a long time, Sir?”

The public comments on the article demonstrate the scale of the division within India over the history and future of the volatile Kashmir region, which was divided between India and Pakistan when the two became separate states in 1947—and whose borders have been contested ever since. The top commenter accused the girl of being a ‘brainwashed terror supporter’ who knew nothing about the ethnic conflicts of the 80s and 90s between Kashmiri Hindus and Muslims.

The most recent wave of protests in Kashmir began in July, in response to the killing of Burhan Muzaffar Wani, commander of Kashmiri separatist group Hizbul Mujahideen. Dozens have been killed and hundreds injured, but it doesn’t seem that anybody is keen on taking an interest in Kashmir. Even the Indian prime minister took 32 days to address the unrest, for which he was criticised by opposition Congress Party politicians.

In the UK there are around half a million people of Kashmiri origin, yet the subject of Kashmir rarely comes up in the media or parliament, besides the odd question from an MP with a large Kashmiri population in his constituency. This is partly due to the fragmentation of allegiances and political divisions within the British Kashmiri community. As Foreign Affairs recently wrote:

‘Although the JKLF [the Jammu Kashmir Liberation Front] was once a major organization, a number of other organizations have emerged in recent years, such as the Jammu Kashmir National Awami Party, United Kashmir People’s National Party, Pakistan People’s Party, Muslim Conference, and Pakistan Tehreek-e-Insaf, among many others. It has become a challenge now to bring all or most of these groups onto one platform. Most of these groups remain disconnected with the ground politics of the Kashmir Valley.’

British national politics is equally disunited and preoccupied with a host of serious domestic and regional matters. Historian and MP Kwasi Kwarteng, who wrote about Kashmir’s colonial and post-colonial history in his book Ghosts of Empire, told me that ‘if you know anything about British politics you know we have zero memory of anything that happened more than 10 years ago’.

The environment is not right for any serious engagement with the issue, Kwarteng believes, given the short-term news cycle, the recent changes in ministerial appointments and the ‘slow burning’ nature of the conflict. This means that ‘something extreme has to happen’ in order for people to take notice.

Another major factor Kwarteng highlighted was Britain’s close ties with India, with PM Modi having visited the UK in November 2015, and UK government ministers visiting India. ‘We are closer to India than we have been in ages’, he said, due to ‘the war on terror and the fact that Pakistan is teetering on the brink of being a failed state’.

On Twitter, Indian journalist Harinder Baweja summed up the cynical nature of the world’s disinterest in Kashmir in the following:

Sorry Kashmir, the Valley may be burning, but you neither have Dalits, nor do you have an election coming up #TruthHurts

Intelligence analyst Stratfor notes that the Indian and Pakistani election cycles have in fact made it difficult for politicians to make concessions when some of their electoral success has been due to an uncompromisingly hardline stance on Kashmir. According to Stratfor, Pakistani PM Nawaz Sharif's party ‘won 76 percent of the seats in Pakistan-administered Kashmir's state elections on July 21 by taking a tough stance against India.’

Similarly, the Hindu-nationalist Bharatiya Janata Party (BJP) in India finds it easy to blame the unrest in Kashmir on Pakistan, rather than seek to address any of the underlying social problems in the region, such as rising unemployment and lingering anger at the trial and execution by India of Kashmiri separatist Afzal Guru in 2013. The BJP has also proposed to repeal Article 370 of the Constitution, which guarantees Kashmir autonomous status and has suggested building housing colonies for Indian soldiers in Kashmir.

Meanwhile, if Western politicians are concerned with the wider world at all, it seems largely about how to insulate themselves from its effects. Shashank Joshi, an analyst for RUSI has attributed this to the West’s ‘limited bandwidth’:

Western think tanks such as the right-wing Gatestone Institute believe that Kashmir should be part of the West’s discourse on Islamic terrorism. Vijeta Uniyal, writing for Gatestone, contends that violent mobs of Islamists are fighting to create a separatist Islamic state, and India’s military presence, rather than being an ‘occupation’, is a war against Islamic terrorism. He refers to the birdshot pellet guns used by the Indian army, and which have blinded many protesters, as ‘BB guns’, and criticises the Indian government for not standing up for Hindu rights in Kashmir. Uniyal believes that unless India builds fortified compounds and arms Hindu and Sikh civilians to reverse the ethnic cleansing of non-Muslims from the Kashmir valley, Kashmir will become another Islamic State.

For partisan commenters on both sides, compromise seems impossible. Kashmir is like Solomon’s Baby, except both of its prospective mothers are happy to cut it in half. In the absence of strong moderate voices on both sides, it is understandable that Kashmir appears to Western governments and media as just another headache they would rather ignore.