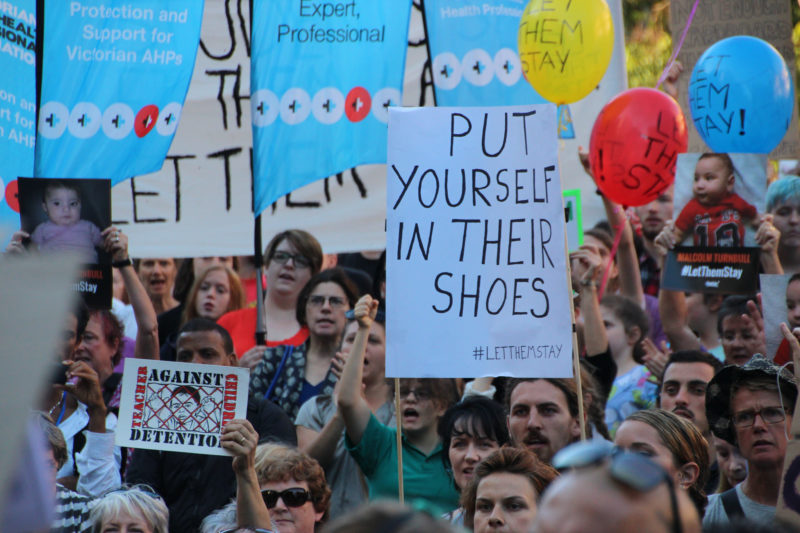 A Melbourne rally protesting the return of asylum seekers and refugees to Nauru. Photo from Flickr page of Takver (CC license)

Over two thousand leaked files revealed a disturbing string of sexual abuse, assault and self-harm incidents at Australia's detention centre for asylum seekers on the tiny Pacific nation of Nauru. The redacted documents were published by The Guardian this week. With more than 8,000 pages, the leaks cover the period between May 2013 and October 2015. Over half of the incidents involve children.

On one occasion, a guard at the centre allegedly hit a five year old girl “so hard it lifted her off her feet and sent her crashing to the ground”. Another file detailed how a father threatened to kill both himself and his children on multiple occasions, but was initially not referred to mental health services. In another report, a female asylum seeker was told she was ‘on a list’ of single women Nauru guards were ‘waiting for’.

As of June, 442 asylum seekers and refugees were living in the Nauru “regional processing centre”, including 49 children. Several hundred more live “in the community” of Nauru, outside the scope of government statistics. It is current Australian government policy that no person who arrives on its shores by boat to seek asylum will be settled in the country. Instead, they are sent to Nauru, or to Papua New Guinea’s Manus Island in arbitrary and indefinite detention for “offshore processing”.

The United Nations High Commissioner for Refugees and dozens of other human rights, legal and medical organisations also lined up to criticise Australia's treatment of refugees in light of the #NauruFiles.

Not the first, nor the last

While this latest leak is significant, it is far from the first – nor likely the last – exposé of Australia's controversial offshore detention policies. A host of government-sponsored and independent reports, including the Australian Human Rights Commission's 2014 ‘Forgotten Children’ report, the Moss Review and a joint Amnesty International and Human Rights Watch investigation, had already flagged many of the abusive conditions on Nauru.

The seemingly lacklustre public response to the #NauruFiles, however, have some people quietly despairing over whether even they will be enough to catalyse meaningful change:

The #Naurufiles are page 1 of Wednesday's @guardian in the UK. The Aus media will be obsessed with gold medals https://t.co/o6mDC8w9i8

Response to #naurufiles shows such casual cruelty with Australians just turning their heads away.

Indeed, reactions to the #NauruFiles by the Australian government have so far followed a familiar pattern of obfuscation and denial.

Immigration Minister Peter Dutton was quick to accuse asylum seekers of faking reports of abuse in misguided attempts to enter Australia, saying, “some people do have a motivation to make a false complaint.” Prime Minister Malcolm Turnbull said the files would be “carefully examined”, but refused to entertain calls for a royal commission. Meanwhile, leader of the opposing Labor Party Bill Shorten called for an independent children's advocate, but stopped short of calling for the closure of the Nauru centre.

If the duration and seriousness of the abuse allegations have taken many by surprise, those who have paid attention to the trajectory of Australia's asylum seeker policies for the last decade or so are not among them. Both major Australian parties have been integral in orchestrating what is known as ‘The Pacific Solution’, the policy of removing asylum seekers to remote island nations rather than process them on the Australian mainland.

reminder: if ur appalled at what you read in the #NauruFiles remember: this abuse is sanctioned by both major parties. bipartisan terror.

Surely anyone who has been Australian PM since the Pacific Solution is guilty of human rights abuse? #naurufiles