Despite Flood Devastation, the Macedonian Government Pours Millions Into a Ferris Wheel 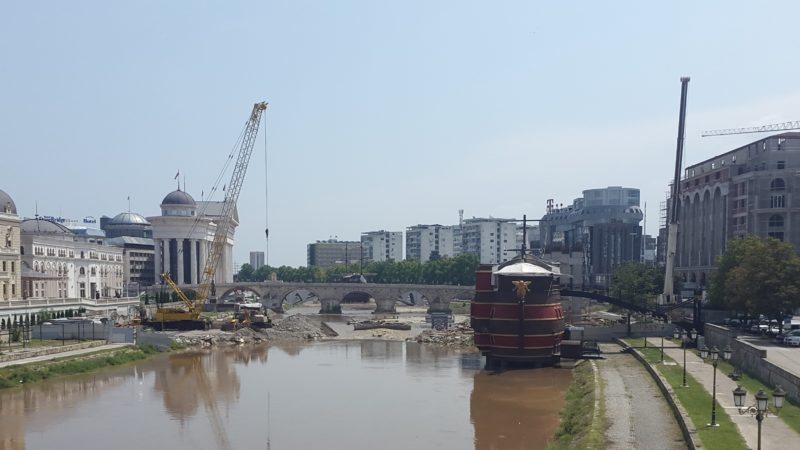 Macedonians are outraged their government is asking for flood relief donations, while spending millions in taxpayers money on a massive ferris wheel, and that they are not diverting critical construction resources and machinery towards flood relief.

At least 21 people died, and dozens are missing and injured, in floods that hit the Macedonian capital Skopje, following torrential rains on August 5. The water level in some areas reached a height of 1.5 metres (4 ft 11 in) because the drainage systems were faulty or did not exist.

While relief efforts are underway, the government asked for donations from citizens, and also started accepting charity from neighbouring countries. In four days, private citizens donated 427,708 euros by giving money directly to the emergency assistance organisation the Red Cross or through a government hotline.

However, many are outraged that the state continues to spend public money on its vanity project Skopje 2014, which aims to give the capital a more “monumental and visually pleasing image” that promotes Macedonia's grand heritage through the construction and reconstruction of museums, bridges, monuments and government buildings.

Citizens in particular are outraged that the construction of the Panoramic Ferris Wheel at the centre of Skopje, continued on Monday, the declared day of mourning. The ferris wheel costs the taxpayers an astonishing 18,939,723 euros (over 21.2 million US dollars).

The diaspora gathered 17, 000 dollars. We are spending 1117 times more on this panoramic wheel.

Serbia, Bulgaria, Albania, even Turkey sent aid, while our government still erects monuments and a panoramic wheel. I really don't get this…

Citizens have also pointed out that the construction machinery and workers hired by the government to work on Skopje 2014 and other projects should have been used in the flooded areas, where entire towns and villages including streets and houses are covered in mud.

Twitter user @SeirDotMk referred to the pro-government mantra ,”at least they are building something” when commenting on this issue:

This excavator has not been photographed in the flooded areas. This excavator is digging on the construction site of the new panoramic wheel. At least they are building something.

When asked whether he would recommend the budget for the Ferris Wheel to be diverted to flood victims and to build a flood protection system, President of Macedonia Gjorge Ivanov replied:

“That’s a decision for the government to make, you should ask the government. I, as a commander in chief, did everything in my jurisdiction so far, and will continue taking all actions in my competence as president. “

And then he informed the public that his orders led to 400 members of the army being deployed to deal with flood relief.