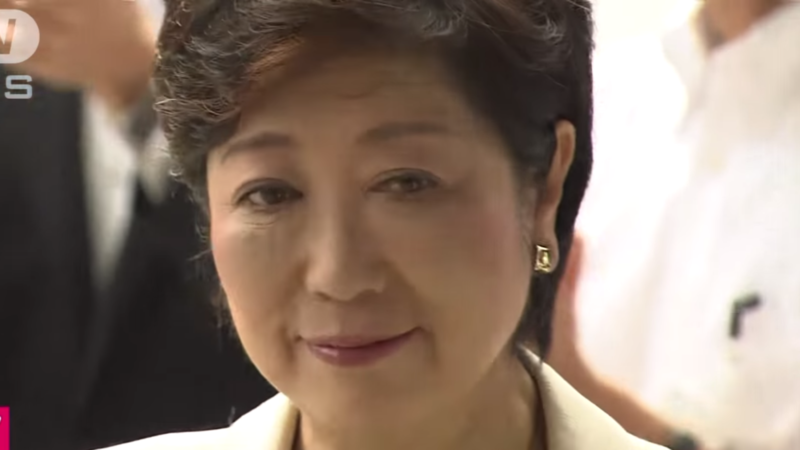 Tokyo elected its first female governor on July 31. The political underdog Yuriko Koike [2], who was sidelined by her own party, racked up 2.91 million votes [3] in a landslide victory. [3] Despite her popularity at the polls, Koike's battle is far from over.

At her first day on the job, she was snubbed by Tokyo's assembly members.

Koike also inherits an office plagued by money scandals. The last two governors stepped down after accusations of graft. During her campaign, Koike made big promises to make the management of the metropolitan government more transparent [13] and to introduce policies that would create ‘a Tokyo where everyone — women, men, children, senior citizens and people living with disabilities — could shine’.

To meet these big promises, Koike, the rogue candidate, will effectively have to work with Prime Minister Shinzo Abe's Liberal Democratic Party (LDP). That's the party that sidelined her. The LDP runs the metropolitan government and has a majority in the metropolitan assembly.

Sidelined by her own party

Officially, 64-year-old Koike is a member of  the LDP. She even had a successful tenure as their environment minister. But after failing to obtain her party's consent, she ran as an independent in the governor's race.

The LDP, instead, backed their former internal affairs minister Masuda against her. Koike's landslide victory came despite threats from the LDP that it would expel members who voted for Koike over Masuda. At the polls, Masuda only got 1.79 million votes; the opposition-backed Shuntaro Torigoe got 1.34 million votes. Koike, the rogue candidate, won by a landslide.

At the assembly, battle lines drawn

While Koike's emphasis of her underdog status seems to have paid off well for her in the race, on her first day on the job she received a cold shoulder from Tokyo assembly members, possibly due to remarks she made during the campaign that the Tokyo Metropolitan Assembly is a hotbed of corruption [14]:

Governor Koike arrives at the Tochō (Tokyo Metropolitan Government Building) for the first time! […] We were the only members of the assembly to come out and greet her. And there was discord even among the staff who were lined up for the ceremony this morning. The battle lines have already been drawn. […]

An LDP veteran, Koike has a unusual biography for a Japanese politician [18]. Born in Ashiya, an affluent suburb of Kobe in western Japan, Koike's father ran a company that traded and imported oil and petroleum. This family ties likely instilled the importance of relations with the Middle East in Koike, who went on to study at Cairo University in Egypt [19] during the 1973 Arab-Israeli war. Koike has said that she learned a lot about international politics from her experience of the war.

“Cool Biz” [20] is an energy-saving campaign initiated by the Japanese Ministry of the Environment from summer 2005. Government employees were encouraged to shed their ties and jackets during the summer, allowing office air conditioner temperatures to be set to higher temperatures. The campaign soon spread to the private sector. Initially the campaign was from June to September, but it was extended to run from May to October following electricity shortages after the 2011 Tōhoku earthquake and tsunami. 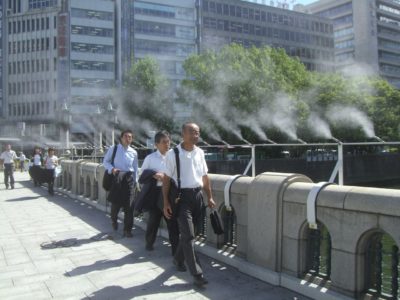 In politics, she earned herself the unflattering nickname “migrant bird” for her frequent party switching: she held positions [22]with several now-defunct conservative parties before becoming a member of the LDP in 2002. She was appointed environment minister the following year, and was responsible for proposing the successful “Cool Biz” campaign [20], which encourages businesses to adopt a casual dress code for the summer months.

Koike also became the first female defense minister in 2007, but resigned just 55 days later due to a dispute over the appointment of the vice minister.

“A Tokyo where everyone can shine”

As the Tokyo metropolis’ first female governor, Koike is committed to pushing policies that will promote better conditions for women.

After her victory, Koike declared [23]:

I […] will create a Tokyo where everyone can shine – women, men, children, senior citizens and people living with disabilities. I will work with you all to create a new Tokyo government like we have never seen before.

Koike has also vowed to work [24]toward eliminating long waiting lists for childcare centers, as well as improving elderly care and work-life balance. The over 8,000 infants and children on childcare waiting lists [25] in the capital were considered a top priority by all three gubernatorial candidates, and Koike pledged to loosen regulations to increase the number of childcare facilities and early childhood care workers.

“I will create a Tokyo where everyone can shine – women, men, children, senior citizens and people living with disabilities.”

Single since a divorce in her 20s, Koike has positioned herself as a challenger to male-dominated establishment politics. However, some are concerned about what effect Koike's conservatism might have on her goals of establishing a more equal society.

Koike's views are very much in line with the LDP's brand of conservative nationalism. She has also continued Diet visits to the controversial Yasukuni Shrine [26], where over 1,000 World War II war criminals are enshrined.

Some critics have pointed out Koike's association with ultraconservative organization Nippon Kaigi [27], which has advocated for textbook revisions to downplay Japan's role in World War II. The group has also been accused of holding misogynistic views. Koike has, however, attempted to distance herself from the organization [28] in recent years, only sending proxies to its gatherings, although she has said that she agrees with its core values of cherishing Japan's national interest, history and tradition.

Residents are looking for a governor who will put their needs first, after the capital's two preceding governors stepped down before the expiration of their respective terms due chiefly to money scandals. Koike's predecessor, Yoichi Masuzoe, was criticized for his extravagant spending of taxpayer money [29] on his overseas business trips, including stays at luxury hotel suites and first-class air travel. He dismissed the criticism by saying, “It is not a problem.” His predecessor, Naoki Inose, resigned following allegations of election fund-raising irregularities.

Already, Koike has come under fire for her use of political funds to purchase copies of a book she wrote, and some commentators are growing suspicious of her promises to clean up Tokyo politics.

【100RT】 It has been revealed that Governor Yuroko Koike, who appealed to voters with her squeaky-clean image, used political funds to buy up copies of her own book. In three years, she purchased 1,290 copies for a total of  ¥1.45 million (roughly $14,200 USD), filing the costs under “research funding”.

Koike has also faced scrutiny over the cost of an upcoming business trip to Rio de Janeiro, where she will attend the closing ceremony of the Olympic Games. While she acknowledged that some might consider the trip expensive, Koike said that she would listen to the voices of the people and endeavor to cut costs where possible in the future.

She will fly business class and stay at a hotel selected by the International Olympic Committee.

Residents are also looking to Koike to successfully manage the financial burden of the 2020 Tokyo Olympics and Paralympics, in addition the the myriad of other challenges she must face in the next four years. There is also the worrisome possibility that the next gubernatorial election will coincide with, or fall just before, the Olympics [36].

Given the cloud of scandal that hangs over her two predecessors, the criticism Koike has faced so far, particularly in regards to financial matters, is hardly surprising. Tokyo citizens are watching Koike closely to see if keeps her election promises to reduce government spending. On her first day in office, Koike pledged to shake up Tokyo politics, but in order to achieve the kind of reforms voters want, she will have to cooperate with the LDP. Koike must show, over the next few years, that she is worthy of the confidence of Tokyo voters.