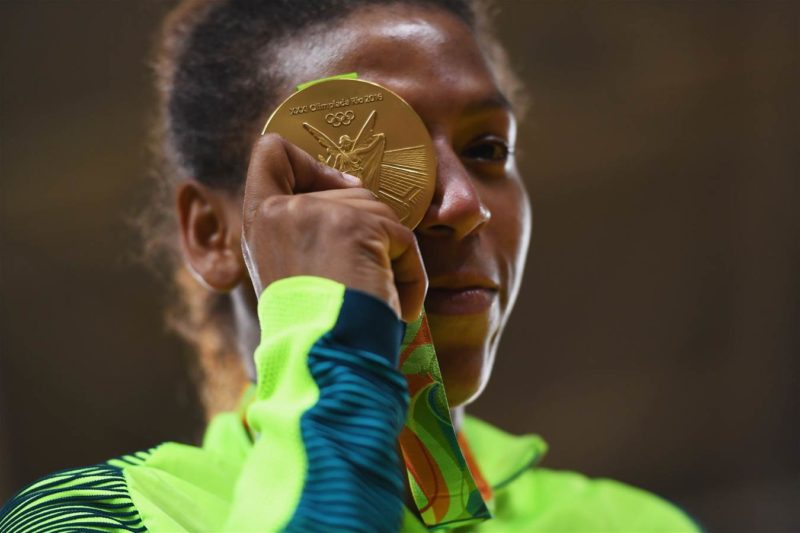 Brazil is still in awe of Rafaela Silva's victory in judo, which brought in the 2016 Olympic host's first gold medal. But for those outside Brazil, many may have forgotten the racial abuse she suffered in 2012 after being disqualified from the London Olympics.

Rafaela grew up in a poor family in a favela in Rio de Janeiro called Cidade de Deus, made famous by the 2002 film City of God. Along with her older sister Raquel Silva, she started to learn judo at the age of 8 at the Instituto Reação, a social project founded by former Brazilian judoka Flávio Canto, who won a Bronze medal in Athens 2004.

At 19, Rafaela competed in a Olympic games for the first time in London. At the elimination round, she was disqualified during a fight with Hungarian judoka Hedvig Karakas for doing a maneuver that had recently been rendered illegal due to a change in the rules. She left the arena in tears. “I went to my room and got my phone looking for some sort of comfort, some message”, she said in an interview to Globo Espetacular, a local TV channel, in January — only to open her Twitter to find other users slandering racial abuse and offenses at her.

Brazilian website Sensacionalista gathered a couple of those tweets (many have now been deleted).

“This @rafaelasilvaa is an embarrassment for Brazilian judo, she should be banished from sports”.

“Beware of making something stupid in 2016 in Brazil, that is, if you get a spot in the Olympics at all hahaha”

“Olympics are serious. Not a police gunfight”.

“Uh, I'm scared! She should calm herself down, otherwise will take another ippon this time with my whip”

Rafaela also showed her Twitter feed to reporters at that time where one tweet read “a monkey's place is at the cage, not the Olympics”.

After the abuse in 2012, Rafaela was determined to quit judo. Her long time coach Geraldo Bernardes said that for a while she barely wanted to leave the house, fearing she would be recognized in the streets in Rio de Janeiro and would be verbally attacked. Only with a few months of psychological treatment she decided to get back on her feet in 2013, when she decided to compete in the judo world championship — which she won in her category.

After her recent victory four years later, Rafaela gave an emotional interview saying “After my defeat, everyone criticized me. They said judo wasn't for me, that was a embarrassment for my family. Now I'm an Olympic champion in my own home”.