In Hospital Bombing, Pakistan Lost a Whole Generation of Lawyers in Balochistan 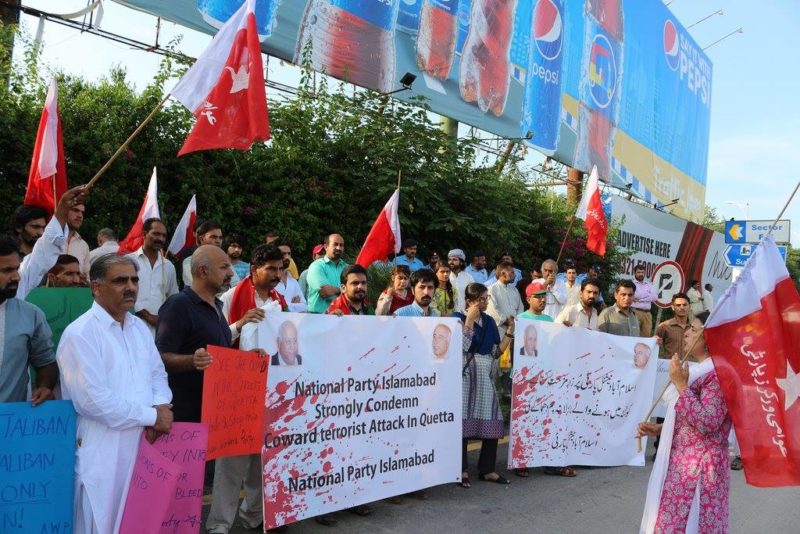 Lawyers around Pakistan are going on strike, following a suicide bombing at a hospital in the southwestern city of Quetta that killed 70 people on August 8. At least 30 lawyers are believed to be among the dead. According to a member of the Balochistan Bar Association, the bombing killed an entire generation of lawyers in Pakistan's largest but poorest province Balochistan.

When the bomber struck, dozens of lawyers were gathered at the emergency ward of Civic Hospital Quetta to mourn the assassination of their colleague Bilal Anwar Kasi, the Balochistan Bar Association President. Kasi's body was brought to the hospital after his car came under attack.

The Pakistani Taliban faction Jammat-ul-Ahrar claimed responsibility for Kasi's killing and the bombing.

Quetta is the provincial capital of Pakistan's province Balochistan and is home to a wide array of human rights abuses and security threats. The province shares borders with Afghanistan and Iran. Taliban-linked and sectarian militants operate in the region. Decades of neglect and grievances over lack of development and political representation have fuelled a separatist insurgency. In response, Pakistan's law enforcement have been involved in alleged enforced disappearances, which have further aggravated the political turmoil.

The lawyers, many of whom were their family's first generation to attend college, served as the province's only hope for justice.

“Most of those who died were first generation educated”

Lawyer Barkhurdar who lost many colleagues in the blast shared the magnitude of the loss on his Twitter account:

So my total standing at the bar comes to six years of which I have spent nine months in Quetta. After this incident, all the lawyers in my..

Batch are now in the top 100 practicing lawyers both in terms of standing and seniority. Let that sink in for a moment. All, I repeat ALL..

Senior practicing lawyers and Barristers died today. My senior Barrister Adnan Kasi passed away and the rest of the associates in our…

Chamber are either dead, injured or missing as of yet. That's about the level of loss in terms of body count and professional experience…

The number of junior lawyers, who are the sole bread winners of their homes and who are now unemployed runs into hundreds. Most of those…

Who died Were first gen educated.

Sam Zarifi, Asia Director for the International Commission of Jurists issued a statement condemning the attack:

As such, it constituted a serious loss for the legal community and increases existing pressure on the independence of the bar.

“Some sanity, some humanity should prevail”

In the aftermath of the bombing, top civil and military leadership issued statements stating that they believed the attack was an attempt to sabotage the ongoing China-Pakistan Economic Corridor (CPEC) project. The CPEC is a development scheme with a collection of projects, which includes network of highways, railways, and pipelines accompanied by energy, industrial, and other infrastructure development projects worth $46 billion. Eventually the project will connect the Chinese city Kashgar to Pakistan's Gwadar port.

Comments from the top leadership have spurred an uproar amongst the residents of Balochistan who already feel neglected. Human rights and education campaigner Sajjad Changezi is offended by the statement:

People of #Balochistan have been seriously offended by the ‘CPEC lovers’. Some sanity, some humanity should prevail.#SenselessBastards

Political activist Sikander Bhadera feels that the authorities do not care about the loss of life:

Everyone seems to be worried about the CPEC. The dead bodies somehow don't seem important enough. #Quetta

Retired military officer Khalid Munir believes that the law enforcement needs to focus on the real issues of security instead of the CPEC:

Remain focused on terrorists. Such attacks will continue till all are eliminated. CPEC doesn't pass through Quetta hospital. #QuettaBlast

“The legal fraternity has had enough”

On June 8, principal of Law College Quetta, Barrister Amanullah Achakzai was shot dead after unknown assailants opened fire on his car. Achakzai was known for his principled stance and for ensuring that the law college upheld merit during admissions and did not succumb to political pressure.

Lawyers in Balochistan believe that Achakzai's killing was the first attack on lawyers, who are being targeted:

And last week, a lawyer named Jahanzeb Alvi was shot dead by unknown armed men in the Brewery road area of Quetta.

After the hospital attack on Monday, lawyers have announced a week-long strike to protest killings and demand action as many are still coming to terms with the devastation as news of more deaths keeps coming in:

Associate in our chamber. Ghulam Muhammad. He had been a lawyer's clerk for 12 years. Only recently completed his LLB and joined our ranks..

While the legal fraternity mourns, citizens are coming together to help support the families who have lost their loved ones. Activist and writer Usama Khilji is working to set up a scholarship fund for law students from Balochistan, he shared this call for action in a Facebook post:

I would like to set up a scholarship fund for law students from Balochistan in memory of the lawyers who lost their lives in the senseless attack today in Quetta. If they will kill our intellectuals, we will work to multiply them in numbers and power.

We will need to find donors willing to contribute, as well as deserving students from Balochistan that want to study law.

Editor's note: The writer is a friend and a colleague of  Usama Khilji and is currently helping with fundraising for the scholarship. The caption was updated with a correction, National Party of Islamabad (Federal Unit) were co-organisers for the protest. Thank you Sidra Saeed for bringing the error to our attention.