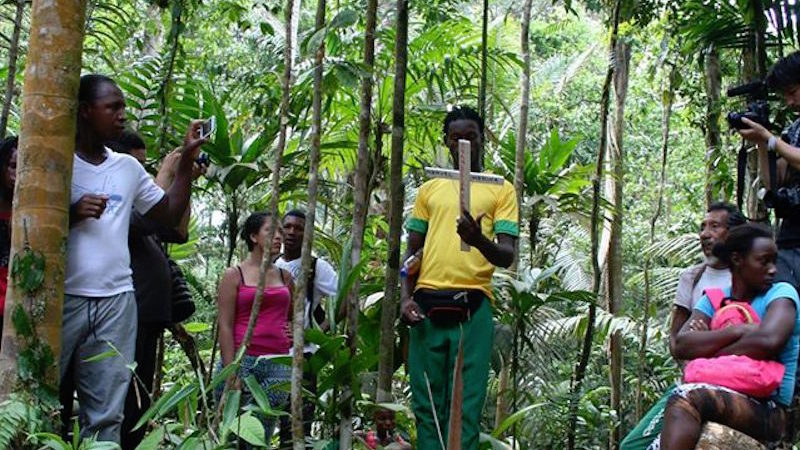 Community members pay homage to the victims of Operación Génesis. Image shared by FOR Peace Presence, used with permission.

This post is an adapted version of an original text written by FOR Peace Presence [1], originally published here [2].

With peace talks nearly complete, many communities around Colombia must now work to build a lasting truce in the country's more remote regions, facing numerous challenges and a complex network of relationships that have defined the conflict for years.

Today's Afro-Colombian community in Cacarica, in eastern Colombia, knows these challenges all too well. Historically, the region's black community has witnessed high levels of state-sponsored violence. The most infamous example is Operation Génesis [3], which took place in February 1997 and caused the displacement of more than 4,000 Afro-Colombians during the internal armed conflict [4] that's only coming to an end today.

In 2013, the television program Contravía recorded interviews with several of the victims of this displacement:

Armed forces from both the military and the paramilitary executed the forced dislocation, officially in order to counteract the presence of guerrilla groups [5]. A right-wing death squad called the “United Self Defense Forces of Colombia AUC [6]” worked closely with the military, furnished with weapons by large landowners who had had a vested interest in the operation, because of damage to their businesses caused by guerrilla attacks [7].

The operation caused the deaths and forced disappearances of more than 80 people. It is just one of several massacres committed by military and paramilitary groups in a joint operation.

Only in November 2013 did the Inter-American Court of Human Rights [8](IACHR) condemn the Colombian government for the forced displacement of Afro-Colombian communities as a result of Operation Génesis.

The Creation of CAVIDA: An Answer to Injustice

For years, the Colombian government refused to implement any of the collective or individual reparations ordered by the IACHR. As a result, surviving community members have organized themselves into the Communities for Self-Determination, Life, and Dignity of Cacarica (CAVIDA), founding one of the first humanitarian zones in Columbia, called Nueva Vida y Esperanza en Dios (New Life and Hope for God). The humanitarian zone is a legal entity based on the Geneva Protocols.

Colombia's humanitarian zones are clearly demarcated areas inhabited by civilian populations where armed forces of any kind are not supposed to enter. The establishment of a humanitarian zone enabled CAVIDA members to return to their land and live protected from the internal armed conflict in a region with presence of all types of legal and illegal armed actors.

During all the years of their displacement, victims of Operation Génesis asked for a collective land title as an Afro-descendent community in order to guarantee their stay on the land, which they received in July 1998. The collective land title of more than 103,024 hectares was finally handed over to the black community of Cacarica in December 1999. This collective title was based on Colombia's Law 70, or the “Law of Black Communities,” passed in 1993 to protect the rights and cultural identity ethnic minorities.

In the documentary film ‘We Are Land,” shared by Peace Brigades Colombia [9] (part of Peace Brigades International), members of the Cacarica community talk about their experiences with displacement and relocation:

Despite facing threats from armed groups, the community resettled its homeland in 2000 and 2001. “We still haven’t really returned,” says one member of CAVIDA in the film. As these people settled land in the newly founded humanitarian zones, only a few were able to return to their original homes and past lives. Most decided to stay on the land concentrated in humanitarian zones, citing fears about continued threats from armed men.

The IACHR had also ordered a reparation measure regarding collective memory. When the government didn't respond, CAVIDA took it upon itself to construct a monument in the humanitarian zone Nueva Vida. The statue's inscription summarizes the community's demands, reading, “Yesterday they displaced us, murdered us, and kidnapped us. Yesterday and today we are together holding hands with the world, resisting death, and resisting impunity.”

The IACHR also established a commemoration to remember Operation Genesis and it atrocities. This year, CAVIDA invited international and national organizations to attend its commemoration of the 19th anniversary of Operation Génesis and organized a hike that lasted several days and led through the thick rain forest to the border between Colombia and Panama, up to a hill called Cerrro Mocho, which is also home to a military base. Cerro Mocho forms a boundary of the black community’s territory in Cacarica with the Panamanian border.

Despite efforts to tackle the traumatic experience of the massacres and displacements caused by Operation Genesis and the unfulfilled demands for reparations, members of the Afro-Colombian population who returned have generally been unable to retake their quiet lives as subsistence farmers, facing continued threats [10]. According to local reports [11], there have been recent incursions by paramilitary groups that pose the constant risk of forcing new displacements, all over again.

The border region between Panama and Colombia comprises a vast territory of thick rain forest with enormous biodiversity, rich in minerals and precious woods. It also constitutes a strategic corridor for a diverse range of interests: among other projects, plans exist to complete the Inter-American highway and interconnect an electrical power infrastructure between Central America and South America.

But the interested parties looking at this land don't end there. In 2013, a binational military base was constructed at the border. Companies are increasingly interested in exploiting natural resources in the area and are taking advantage of the fertile soil for banana monoculture production. At the same time, the area is also an attractive route for Illegal armed groups that consider the corridor an ideal route for drug trafficking, as well.

Paramilitary groups were officially demobilized in 2005, after the Justice and Peace Law of 2005 was adopted. In reality, however, many members of these groups never demobilized, or they formed new groups that still exercise social and economic control over local populations (especially in this border region). One of the biggest and most hierarchical neo-paramilitary groups is called the Gaitanistas Defence Forces of Colombia (AGC), which also has a strong presence in this region. Even though the peace accord between the Colombian government and FARC has been signed, the communities in Cacarica and elsewhere are mostly worried about the persistence of neo-paramilitary structures, which threaten their rights to a peaceful life, according [12] to human rights defenders.

The binational Colombian-Panamanian base located at the border of the humanitarian zones is another big reason for concern among the communities. In June 2013, five months before the IACHR ruled that the Colombian state is responsible for the displacement of the Afro-Colombian communities, the base Guamal was constructed on Cerro Mocho. According to GPS measurements taken by community members and international delegations, the territory of the military base coincides with the territory of the collective title, a fact that Colombian tribunals have denied. This is quite problematic, as the Colombian military was one of the perpetrators during the the operation that resulted in the mass killings, almost two decades ago.

In an effort to protect the civilian population, communities in the humanitarian zones have laid down rules barring access to armed forces. In addition, the Panamanian news media revealed in 2014 that William Brownfield, Colombia's assistant secretary for international narcotics and law enforcement affairs, along with the former ambassador of the United States in Colombia, visited the base, raising concerns about the US government's role in such a strategic area.

Apart from remembering the victims of Operation Genesis, the commemoration also sought to raise concerns about the new base's location. In a joint statement, CAVIDA and others called for an official mission of verification in order to investigate the possibility that the base is located within the community's collective territory. The statement also calls for an inquiry into any agreements signed between the governments of the US, Panama, and Colombia.

In the meantime, today's self organized Afro-Colombian community is left with a lot of unanswered questions, an unsatisfied demand of justice, and many unpleasant neighbors.

This post is an adapted version of an original text written by FOR Peace Presence [1], originally published here [2].