How the Zika Narrative About Puerto Rico Explains US Colonialism 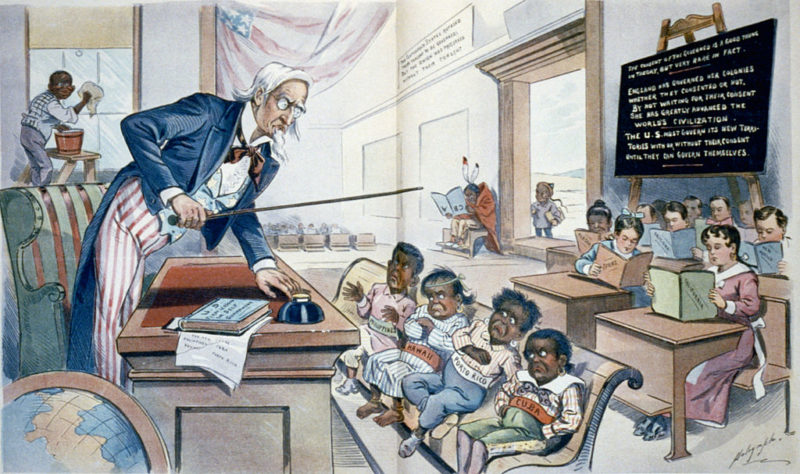 Uncle Sam schools the newest recruits to the US imperial fold in the art of “civilization.” Originally published under the title “School Begins” in the January 25, 1899 issue of Puck magazine. By Louis Dalrymple (1866-1905) [Public domain], via Wikimedia Commons.

The natives are in “chaos.” The “war against Zika” has been “a failure.” A governor’s adviser left his position “in disgust,” and went to vacation in Spain. Disease is rampant. “Some” has been done, “sometimes effectively.” Mosquitoes “breed” in old tires. There are no “cutting-edge plans” to avert the chaos. As “a last resort” the CDC comes to the rescue with the insecticide naled: but, oh, wait, naled is toxic. The natives “rebelled” against the use of naled, and have accused the US of “colonialism” (yes, in quotes!). Ignorant, rebellious, pregnant women do not want to use repellent to protect their babies. What “a horror story.”

This narrative dates, not from the period of the 1898 Spanish-American War, during which the United States invaded and colonized Puerto Rico, together with Cuba, the Philippines, and Guam. This narrative, rather, forms part of a story published in the July 30, 2016 edition of the New York Times. It immediately brought to mind those political cartoons that appeared during the Spanish-American War, when the US media played a pivotal role in presenting Uncle Sam as the savior of the half-naked, infantile, natives of the diseased and poverty-stricken tropics.

“In the NYT story, about the Zika epidemic in Puerto Rico, the imperial gaze is clear. The story also contradicts itself.”

In the NYT story, about the Zika epidemic in Puerto Rico, the imperial gaze is clear. The story also contradicts itself: for if no one is doing anything on the island, why is the fact that women are taking measures against the Zika virus, and the possibility of having babies with microcephaly, cited as one of the reasons for the decrease in the birth rate?

Following the publication of this article, a worried US president Barack Obama issued a broadcast warning Puerto Ricans that they must take the Zika virus seriously. The governor of the island, Alejando García Padilla, expressed support for the President’s message, but the secretary of Health, Ana Ríus Armendáriz, said she felt “scolded.” And in fact we all should have felt scolded. Among other critics, the mayor of the city of Bayamón, Ramón Luis Rivera—who is in favor of Puerto Rico changing its political status from territory to federated state—said that Obama should also take the island’s colonial status seriously, as well as release 73-year-old political prisoner Oscar López Rivera, who has been imprisoned in the United States for 35 years.

Many other countries in the world deal with tropical diseases. Most recently and famously, Brazil is hosting the Olympics amid a Zika epidemic. But these countries are rarely treated in this heavy-handed manner, perhaps because they are autonomous states.

“Puerto Rico has fought successfully against tropical diseases for decades. Dengue has been endemic in the country since the 1960s, and more recently we have grappled with chikungunya, and now Zika. These diseases that seem so outrageous and unique to people in the United States have long been part of our daily lives.”

Puerto Rico has fought successfully against tropical diseases for decades. Dengue has been endemic in the country since the 1960s, and more recently we have grappled with chikungunya, and now Zika, among others. These diseases that seem so outrageous and unique to people in the United States have long been part of our daily lives. Both government agencies and citizens are well informed about them. There have been education campaigns, cleaning brigades, and extensive media coverage. And, yes, life goes on. People continue to work, love, live, struggle, and resist, not only the Zika virus, but something much more devastating: over a 100 years of colonialism and its many consequences.

Most recently, Puerto Rico is resisting yet another manifestation of colonialism, in the form of the US-imposed fiscal oversight board that will control many decisions of the government.

Those who live on this Caribbean island are well informed and aware, not helpless infants in need of being rescued, much less scolded. What we need, at the very least, and at this critical moment in our history, is media coverage that is accurate and demonstrates local awareness—stories that treat Puerto Rico and its people with respect, dignity, and humanity.