The Disappearance of Literary and Social Activist Wahid Baloch 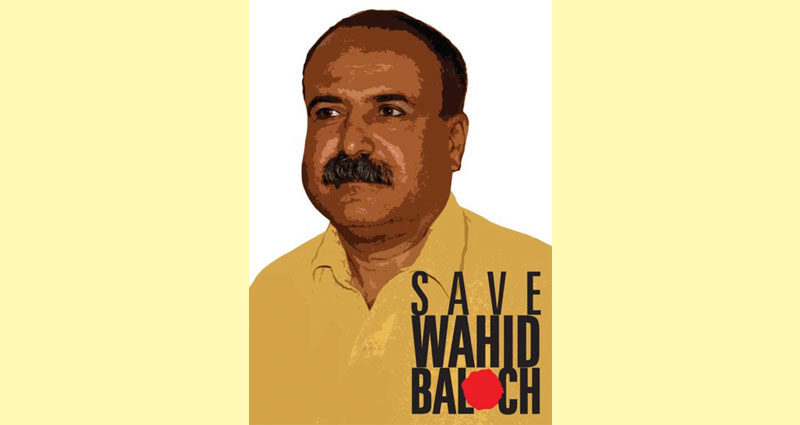 Photo of Wahid Baloch by the artist Khuda Buksh Abro.

Wahid Baloch, a Baloch literary and social activist, was kidnapped on July 26 while returning from a friend’s funeral from Umar Khot in Sindh. (Note: his surname and ethnicity are the same word.) Baloch was on a bus when it was intercepted, and he was offloaded against his will into a car. Better known for his social justice and literary work, Baloch works as a telephone operator at Civil Hospital and is an active voice against forced disappearances in Balochistan, one of Pakistan's largest provinces.

Baloch is also in-charge of Sayyad Hashumi reference library in Karachi which  preserves all the published and unpublished materials on Baloch (the people), Balochi (the language) and Balochistan (the province). The Founder of Sayyad Hashumi library professor Sabah Dashtyar was shot and killed in 2011.

Forced disappearances are not a new phenomena in Baluchistan, where Baloch nationalists are engaged in an armed resistance movement against the Pakistani state. However, a considerable number target unarmed civilians—mostly poets, writers, and activists who are an active part of the resistance movement.

According to official data obtained by the news agency The News, nearly a thousand bullet-ridden corpses have been recovered from various parts of Balochistan in the past six years, and more than half the mutilated bodies have been identified as ethnic Baloch. The report further revealed that more than 112 locals are still missing. In 2014, Farzana Majeed marched thousands of kilometers across Pakistan for her missing brother and the missing people of Baluchistan. Majeed's family, like many others, blame Pakistan's security agencies for these disappearances.

Security agencies have routinely denied involvement in these disappearances, but human rights groups say this is a lie, arguing that the government specifically targets individuals involved in Baloch separatist movements and literary figures who write or speak about the Baloch struggle for freedom. In the wake of Baloch's disappearance, Amnesty International released a statement accusing Pakistan's security agencies of involvement, expressing concerns about Baloch's safety and well-being. The Human Rights Commission has formed a team to investigate Baloch's disappearance.

In a text titled “Who Was Comrade Wahid?” published on the website Baluch Samachar (which shares under-reported and often suppressed news stories from Balochistan), Imtiaz Baloch remembers Baloch's activism and his love for the community:

Wahid Baloch has been determined and passionate about his humanitarian work. He organized several press conferences, protests, gatherings and marches against enforced disappearances of Baloch people. Residents of Lyari use to say: “Wahid bleeds for others”. This passion of dedicating his time for others earned him the nickname of “Comrade”. No one knows Wahid in Lyari, if you don’t add Comrade to his name(..) The Gadap police registered an informal report of his kidnapping but declined to file a First Investigation Report (FIR).

The Pakistani government routinely blocks and suppresses news stories from Balochistan, including websites reporting on the Baloch National Movement. Baloch activists often rely on Twitter and Facebook to share reports about abductions and torture. Activists are using the hashtag #SaveWahidBaloch to draw attention to this latest forced disappearance:

#SaveWahidBaloch It is nearly Two Weeks now that Wahid Baloch was #IllegallyDisappeared. There is no news about him and his Family Suffers.

It has been well over a week since Baloch was abducted. His whereabouts are still unknown, and community members, friends, and his family fear for his life. As Imtiaz Baloch puts it, “A man who fought to eradicate the menace of forced disappearances became a victim of the very crime.”