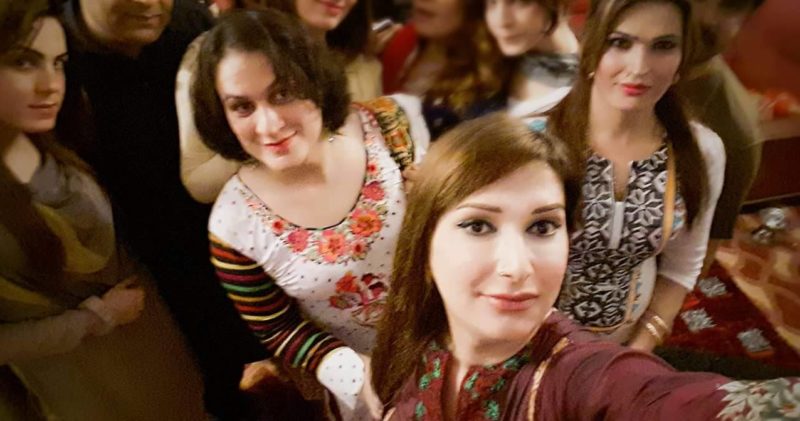 In June, three armed men broke into a home in Mansehra and attempted to rape the person living there, whom they ended up shooting several times. That person is a transgender woman named Kashi, who is only one of many transgender women in Pakistan to have been attacked in recent months. In May, Alehsa, a transgender woman and an activist with the group “Trans Action”, died in the hospital after being shot six times by attackers. Before hear death, Alesha was being propositioned to film pornographic videos, which she refused to do.

“What Is Our Fault?”

Pakistan’s trans community has made some strides in recent years. In 2012, the Pakistani Supreme Court allowed [1] for a “third gender” category to be added to national identity cards, which effectively gave the trans community increased legal standing and the right to vote. At least five transgender women ran [2] for office. Attacks against the community remain widespread, however, and the violence has been increasing in recent years. Since the beginning of 2016, nearly 45 transgender women have been attacked in just the province of Khyber Pakhtunkhwa.

The term generally used by the trans community in South Asia to describe itself is khwaaja sira, and gender identity includes being transsexual, khusra (transgender person), zenanans (cross dressers), and narnbans (eunuch).

The Khwaja Siras live in their own communities led by a Guru (teacher), adopting young boys who are rejected by their families or flee. The community is generally self-sustaining, though many members work as professional dancers or sex workers. Given limited work opportunities, they are at high-risk for being targeted with violence when performing at weddings and parties. They're often targeted when performing sex work, as well.

Sex work is illegal in Pakistan and members of the transgender community are often at great risk. Even trans individuals who are not sex workers, however, have reported being harassed and intimidated into performing sex acts. Trans women in Peshawar have recently started posting on Facebook about violent treatment by local police officers against the trans community.

In the video above, a transgender woman explains how police arrested their guru in the middle of a party:

We were at a party when the police came they took our guru so we went after them. We are already a laughing stock, people mock and chase us, so of course the police did not let us go inside the police station so we decided to protest and chanting “let us in, let us in”, some boys that were standing nearby threw a rock at the gate, so the police came in from behind us (..) they grabbed and beat us up severely. Look at their condition, they tore off their clothes (..) they tore off my clothes as well and beat me up badly. Six policemen were on top of me kicking me and I passed out. Even when I passed out they kept kicking me and said “get up, get up, stop acting” (..). They grabbed and pulled off their hair and beat up others with sticks. What is our fault? We just went after our guru? What could we have done to the police? They even take money from us (extortion) and even take money from our guru, so what is our fault?

In another video [3], transwomen from the town of Nowshera reported being detained for ten hours by police officers:

Seven Transgender women were kept in illegal confinement yesterday for 10 hours by Nowshera Cantt Police Station. There shirts were taken off and they were sexualy harrased. Police kept on touching thier diffrent body parts forcefully.

Not Just in Khyber Pakhtunkhwa

Transwomen from the town of Faislabad, Punjab, are leading a campaign after three transwomen were gang raped by two men last week. In a series [4]of heartbreaking videos, a trans woman named Julie describes the assault and the attempts to shame and silence her and the other victims with subsequent threats of further violence.

In an environment where trans people feel that even the police are not taking serious action against criminals, they have taken to social media to draw attention to the rising discrimination and assaults against their community. Videos shared on Facebook show Julie and her supporters protesting at a local hospital after an on-duty doctor who was supposed to examine her injuries told her simply to “let it go”.

Despite several protests, a police report, and multiple press conferences, many in the trans community feels they are being mocked and silenced, while the violence against them continues with impunity.

Trans people across the country are uniting in their efforts to highlight systemic violence and marginalization. Despite threats, they're continuing efforts to mobilize, demanding that the local authorities take actions to protect them. In a Facebook post [5], Trans Action Khyber Pakhthunkhwa reminded followers that it will continue to fight for trans rights:

We know our rights and we are standing up to claim them.its just the begining. We are a movemnt, we are pink warriors. There is no going back. We are equal citizens of Pakistan. We refuse to sit back. Despite of all the challanges and obstacles we have managed to stage a protest out side the Bolton Block where Alisha died.
‪#‎EndTransPhobia‬ [6]
‪#‎TransAction‬ [7]