On the Eve of Independence Celebrations, Jamaicans Delight in the Rio 2016 Olympics Opening Ceremony 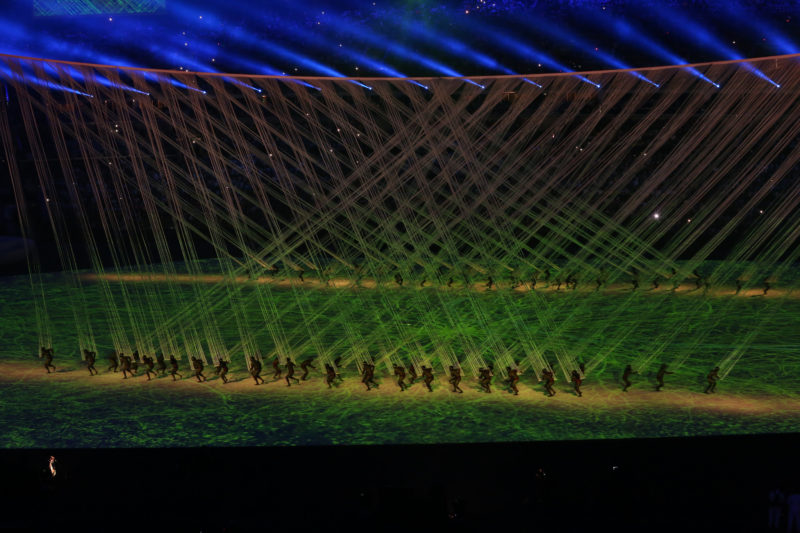 The Jamaican Twittersphere is a lively combination of debates that often return to where they started, and wit that is even more humorous when posted in Patois, a Creole dialect which many feel should be made the official language of the country.

On the eve of the 54th anniversary of Jamaica's independence from Great Britain, as Twitter users sat down to watch the opening ceremony of the 2016 Olympic Games in Rio de Janeiro, the conversation was both hilarious and engaging, covering everything from fashion to politics.

Weary of the news cycle about the U.S. presidential election, broadcast journalist Dionne Jackson Miller had some advice for the hopefuls:

Generally, Jamaicans gave the spectacle of the opening ceremony a firm thumbs up. A young human rights activist tweeted:

She also approved of the green theme of the ceremony, observing:

Like I said…if whole world is gonna watch you, use it to bring awareness for stuff that matters. Well done Brazil. Two thumbs up from me.

This had a very ‘human’ and sensitive touch to it though. Timely and necessary https://t.co/pIYt5OJZ6P

Anticipation grew once the Parade of Nations began, with some complaining about the long wait for the Jamaican team to appear. Blogger Mamachell quipped:

But it was worth the wait. When the Jamaican team finally appeared, flag-bearer and champion sprinter Shelly-Ann Fraser-Pryce's hair (which had hitherto been under wraps) was the talk of Twitter.

Fraser-Pryce, who is hugely popular at home, is set to receive an honorary degree from the University of the West Indies in October. Many Jamaicans shared complimentary tweets from Cosmopolitan magazine and other non-Jamaican accounts praising her gold and green tresses, which perfectly matched the colors of the Jamaican flag:

Some were disappointed, speculating as to why sprint superstar Usain Bolt was absent from the Parade of Nations. Although he claimed he was “lazy,” his absence may have been for security reasons. Fellow gold medalist Fraser-Pryce explained on Facebook:

Looks like the organizers are not taking any chances with the #1 person of the event. Sir Bolt will not be attending the Opening Ceremony. Security tight when it comes to UB and his safety. Besides after 3 previous experience[s] do you really need to attend a 4th😄😄 #OpeningCeremonyUpdate #SafetyFirst

Apart from Fraser-Pryce's hair, the hit of the evening — at least among female Jamaicans — was Tonga's flag bearer Pita Nikolas Taufatofua, who appeared shirtless in traditional costume, with a well-oiled torso. This caused quite a flutter:

There was, at times, both complimentary and caustic commentary on the other teams’ costumes. Analyst and lecturer Dr. Hume Johnson tweeted:

When the Croatian team appeared in their red and white checkers, one Jamaican tweeted:

Croatia come in them tablecloth.

It looked like an Abba costume, so it was all good for me. #SuperTrooper https://t.co/2MbZain1pi

While local TV coverage was interrupted by frequent short breaks for advertisements (and the Lotto draw), Jamaicans were awed by the lighting of the torch. Columnist and businesswoman Jean Lowrie-Chin shared a video clip on Instagram, while entrepreneur Javette Nixon reacted:

Guys, let's not use the Rio Olympics as yet another avenue for regional disunity. We better dan dat

Putting differences aside, Caribbean nationals are expected to do well, especially in track and field. With the excitement — and rivalry, at least amongst the fans — continuing to simmer, the Caribbean lifestyle website Largeup.com shared its list of Top Ten Caribbean Athletes to Watch; there were no real surprises.

Finally, this atmospheric photo tweeted by the Views From 876 summed up the mood of Jamaican pride and patriotism: