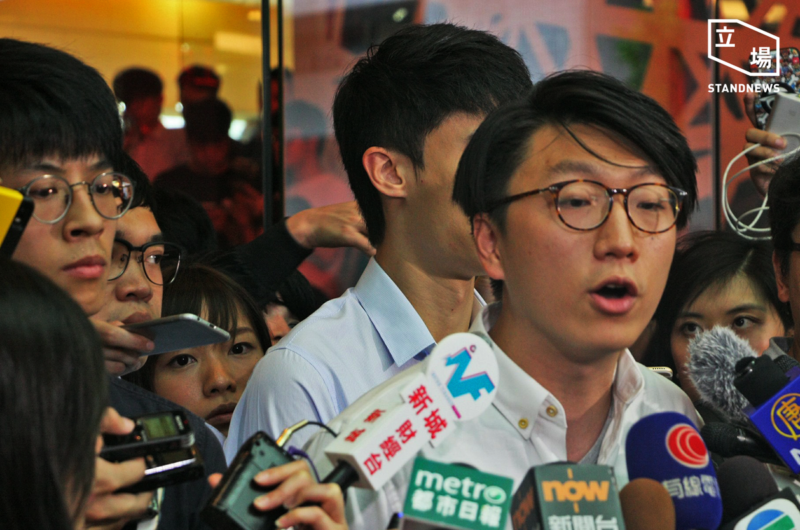 Edward Leung talked to the press after his candidacy was invalidated by the returning officer. Photo from the Stand News. Non-commercial use.

Hong Kong's government has disqualified six potential candidates from running in the 2016 Legislative Council election for their political platforms that are pro-independence or “localist,” referring to politics that promote the values and culture of Hong Kong over those of mainland China.

The decision was made by the city's returning officers (election officials) and marked the first time the civil servants have politically screened a candidate. Many believe that the move is meant to block Hong Kong's pan-democratic alliance from getting enough seats to exercise their veto power in the Legislative Council over election reform.

Moreover, a legislature with marginalized opposition parties will also pave the way for the passage of Basic Law Article 23 [2], which is a local adaptation of China's own strict legislation on national security. Hong Kong is a special administrative region of China that enjoys many more freedoms than the mainland, but many fear that autonomy is increasingly under threat.

The 2016 Legislative Council election will be held on September 4, and the nomination process took place between July 15 and 29.

In fact, abrupt measures were introduced to fence off pro-independence and localist groups. Just two days before the nomination began, the Electoral Affairs Commission set a new rule requiring potential candidates to sign a “loyalty” declaration [3] accepting Chinese rule and renouncing independence for the city. Since the new rule has no legal basis, a third of the nominees from pan-democratic groups have refused to sign, and one has applied to the court for judicial review.

As the loyalty declaration is not working, the Electoral Affairs Commission requested that the returning officers “make their own judgement” on the nominees’ loyalty, resulting in six of them not passing the loyal test and being disqualified:

Edward Leung Tin-kei's disqualification is the most controversial because he had participated in the Legislative Council by-election in January 2016 without a problem. Moreover, he had signed the loyalty declaration and replied in email to the returning officer that he would not advocate Hong Kong's independence if he entered the legislature.

Mr Leung has not provided sufficient reasons or evidence to prove that the media reports on his advocacy for ‘Hong Kong independence’ were not true.

The returning officer pointed to a post by Leung on Facebook, published on July 23, which read: “Basic Law? I have f**king embraced you and have embraced you for so f**king long.”

Leung has filed an “election petition” [8] to the court questioning if the returning officer has abused her power in making the decision to disqualify him.

‘…if Hong Kong follows this path, what will our culture look like?’

The local legal sector has spoken out against the disqualifications. Around 30 barristers and lawyers signed onto a statement [9] accusing the government of violating the Basic Law:

According to the Basic Law Article 26, every Hong Kong citizen enjoys the right to be elected. Article 40 of the Legislative Council Election Ordinance only requires potential candidates to submit a declaration to confirm that s/he would uphold the Basic Law. The ordinance does not empower the returning officer to investigate whether the declaration is “sincere” or not. It never empowers the returning officer to make a subjective political decision to invalidate the candidacy based on hearsay that the potential candidate does not sincerely uphold the Basic Law without due procedure. The investigation and the decision are illegal. The returning officer has exercised political screening without any legal basis.

Apart from censoring candidates, the Electoral Affairs Commission is also censoring the candidates’ pamphlets. According to [10] one of the candidates, Nathan Law, the commission has withheld the approval of their pamphlets, saying that they are seeking opinion from the secretary of justice. The “problematic” terms are:

The political censorship not only affects those who are running in the Legislative Council election, but all Hong Kongers. Tse Kwun Dong, a writer from citizen media platform inmediahk.net, pointed out [11] that under the current circumstances, anyone is in danger of being labeled a separatist and deprived of their political rights:

The Electoral Affairs Commission can gather all sorts of evidence to prove someone is pro-independence. For example, terms like “autonomy” and “self-determination” can be interpreted as “pro-Hong Kong independence.” But these terms represent a positive attitude towards one's future. Would anyone on earth want his or her fate to be determined by others? Only a lackey would think so. But if Hong Kong follows this path, what will our culture look like?

For those who attend the annual June 4 vigil [for the 1989 Tiananmen Square massacre in Beijing] and shout the slogan “end to one-party dictatorship,” such a gesture could be viewed as violating “One Country, Two Systems” because “single-party dictatorship” is the basis of “One Country.” So this can be interpreted as a violation of the Basic Law and lead to you being deprived of all political rights. Incrimination for speech is an endless hunt, and space for freedom of expression keeps shrinking. “White terror” [meaning efforts to suppress political dissidents] is lingering in Hong Kong and becoming more and more serious. Of course, if you are pro-establishment and always side with the politically correct side, you are still free and happy as you are not worried nor care about freedom of thought. But have you thought about your children who want democracy?