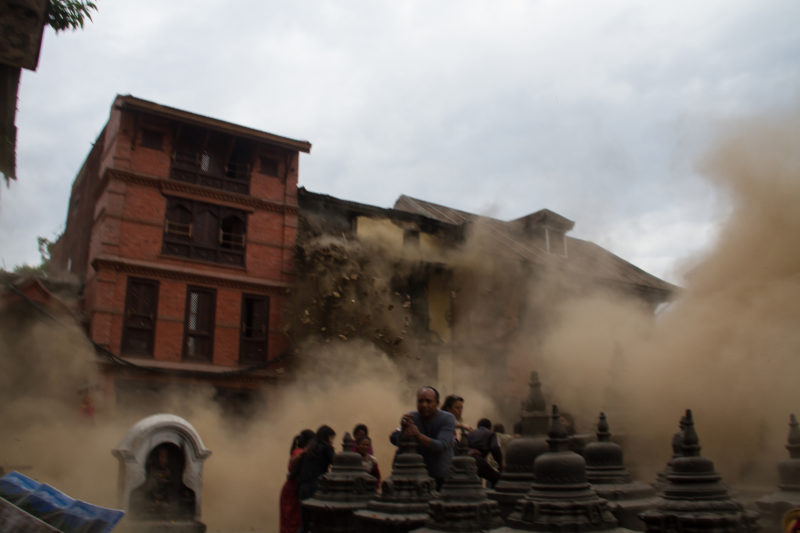 During the last week of July, the Photojournalist Club Nepal announced the winners of this year's IME-Global IME Bank Nepal Photo Contest, which gives out the most award money of any photo contest in Nepal. The categories included culture and tourism, daily life, nature and wildlife, Nepal smiles, sports, news, photo story and the photo of the year.

The contest, organised by the Photojournalist Club, attracts a huge number of entries from photographers, both amateur and professional. A total of 6,670 photos under seven different genres were submitted by 811 photographers this year.

Breaking with the norm, a priest and amateur photographer named Deepak Ratna Bajracharya won the photo of the year category with a shot of the immediate aftermath of a devastating earthquake that rattled Nepal in April 2015, leaving thousands dead.

Congratulations to the main winner of PJ club photo contest Deepak Ratna Bajracharya, pujari of sankata temple, for being at the right place at the right time and capturing really powerful picture of earthquake !

While many of the awarded pictures showcase the different hues of everyday life in Nepal, in the news category, a gruesome image of a man’s torso trapped in in the rubble of a collapsed building took the first spot. Likewise, dust billowing from the Khokana village stood second in the news category. 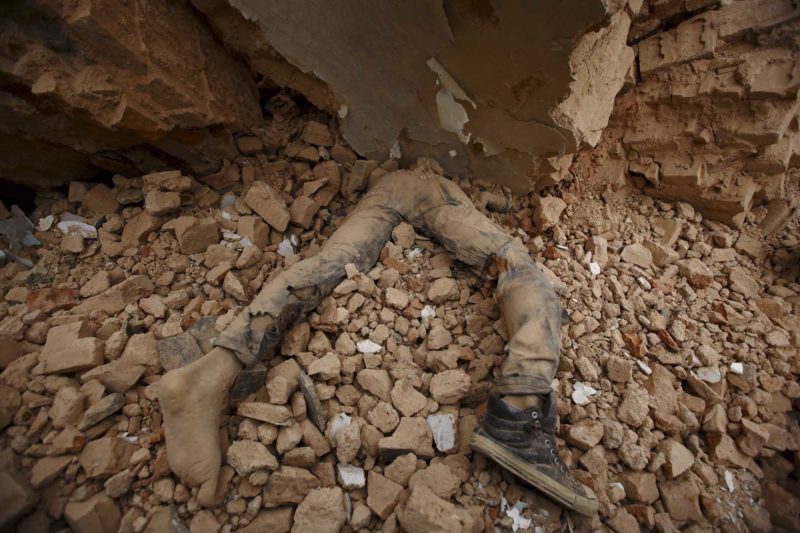 A body of a victim lies trapped under rubble in Kathmandu, Nepal, on April 25, 2015 after an earthquake hit. The shallow earthquake measuring 7.9 magnitude struck west of the ancient Nepali capital of Kathmandu on Saturday, killing around 9,000 people. Image by Navesh Chitrakar. Courtesy: Photojournalist Club, Nepal.

However, not everyone thinks such images are appropriate. One person tweeted:

Somebody needs to teach journalism to journalists who post images of dead bodies in pools of blood online and on Facebook. 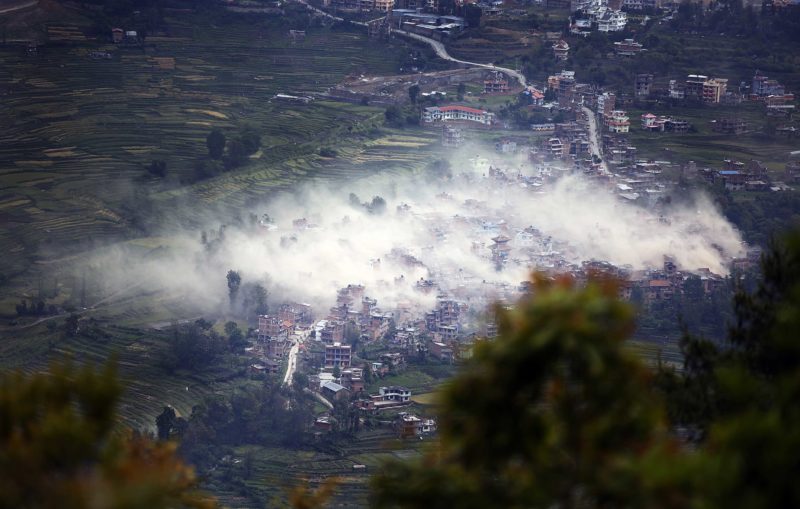 Smoke and dust billow over the sky in Khokana village of Lalitpur district a couple of minutes after Nepal was hit by a devastating earthquake on Saturday, April 25, 2015. Image by Rajesh Gurung. Courtesy: Photojournalist Club, Nepal.

Now, let’s delve into the happy moments captured by the photographers. 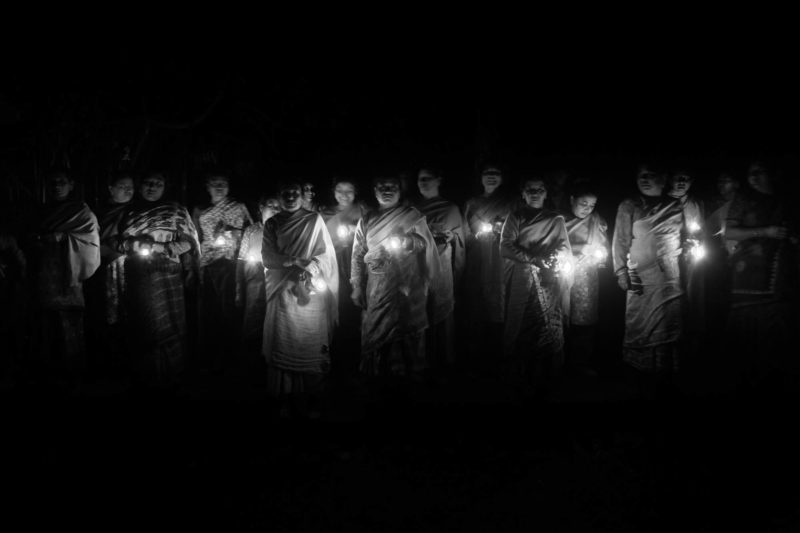 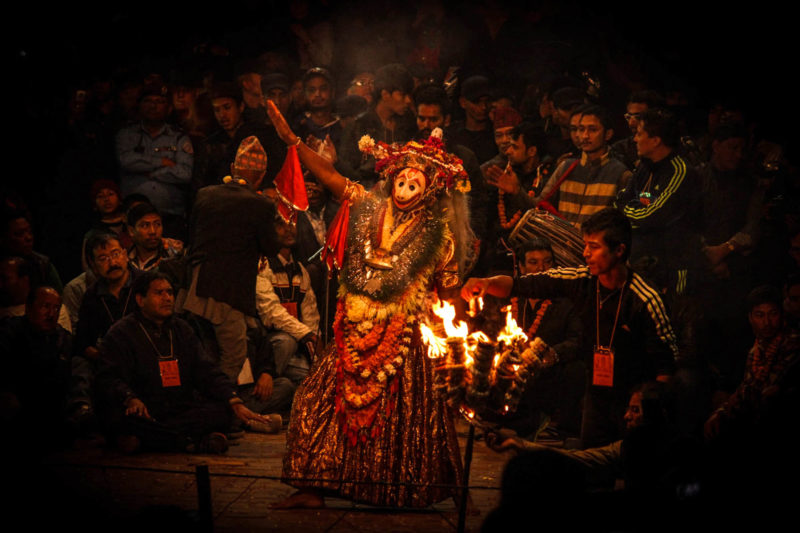 Nepali festivals are a part of the country's rich heritage. Among many festivals, this one is the annual Kartik Naach (Dance of the deity Kartik) being staged at Patan Durbar Square. Kartik Naach is a month-long traditional dance and drama festival that takes place in the Hindu lunar calendar month of Kartik, which falls in October/November. Third-place winner in the culture and tourism category. Image by Avash Karmacharya. Courtesy: Photojournalist Club, Nepal. 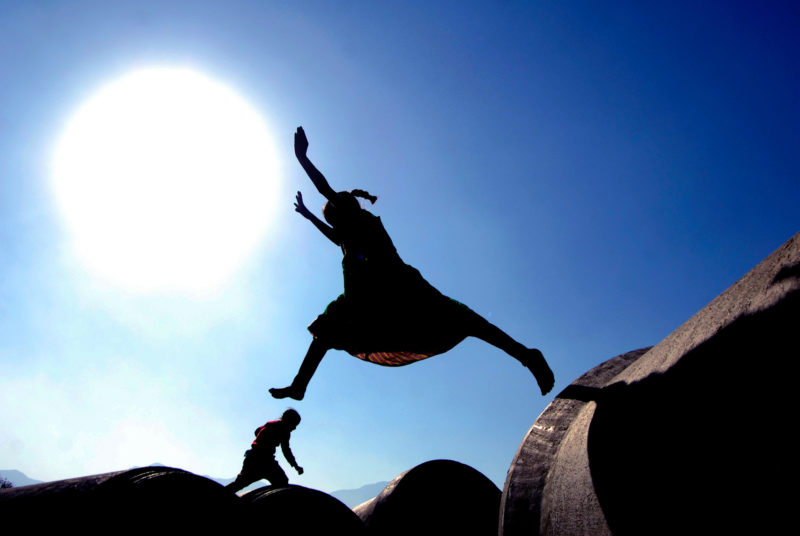 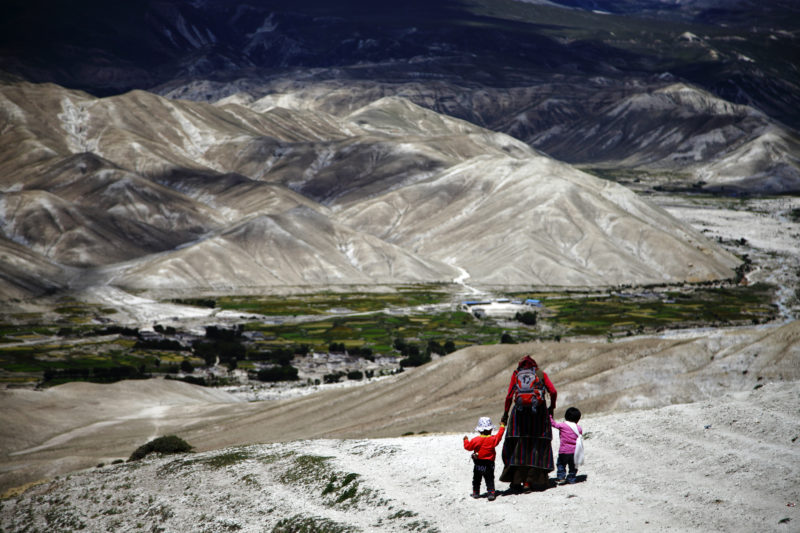 A woman walks with two children as they make their way from Samzong to Lomanthang. Upper Mustang is a remote and isolated region of the Nepalese Himalayas. The Upper Mustang was a restricted demilitarized area until 1992, which makes it one of the most preserved regions in the world, with a majority of the population still speaking traditional Tibetan languages. Tibetan culture has been preserved by the relative isolation of the region from the outside world. Second-place winner in the daily life category. Image by Gopen Rai. Courtesy: Photojournalist Club, Nepal. 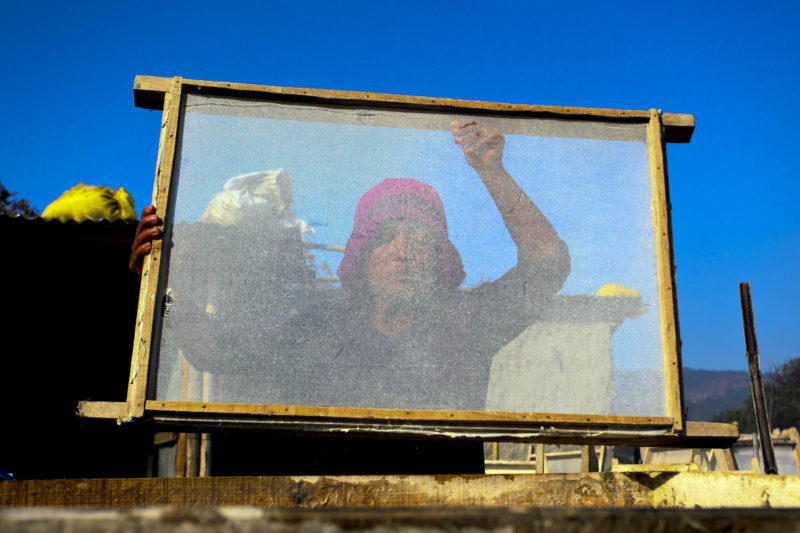 Women carrying the wooden frame to make indigenous handmade Nepali paper at Sankhu, Kathmandu on January 9, 2015. Handmade paper is made from Lokta, a raw material found at an altitude of 6,500 feet to 9,500 feet above sea level. Generally, the paper is used for official and ceremonial purposes, and it has been identified among the 19 major exportable goods of the country. Third-place winner in the daily life category. Image by Pratap Thapa. Courtesy: Photojournalist Club, Nepal. 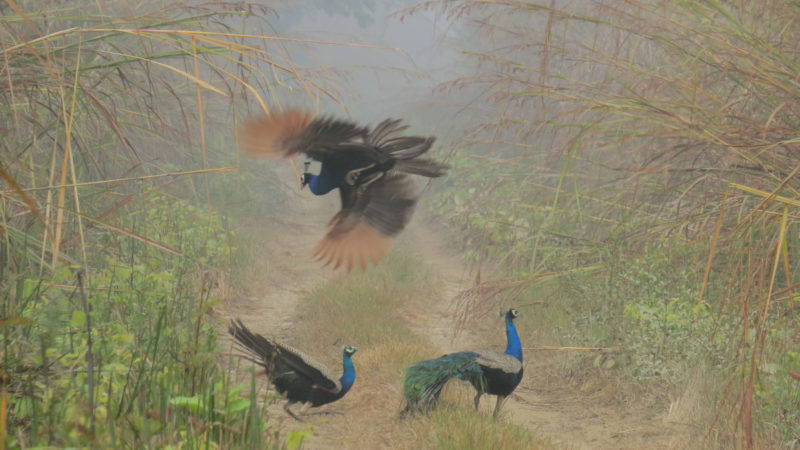 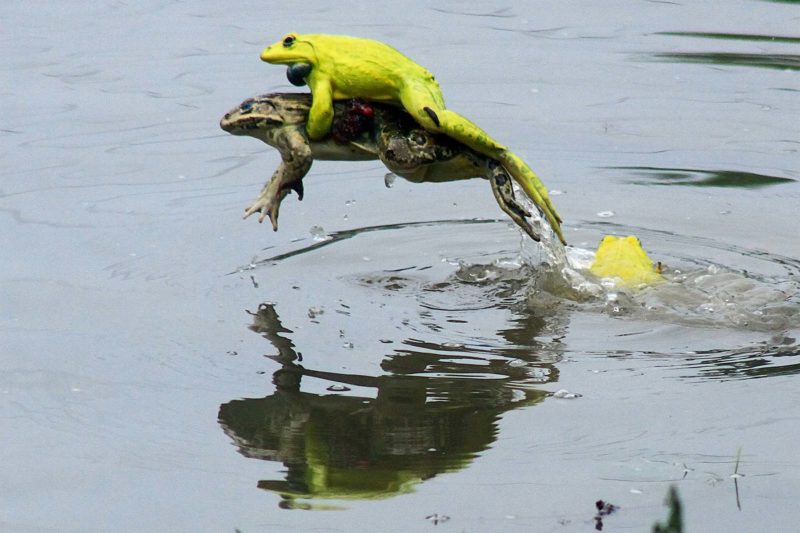 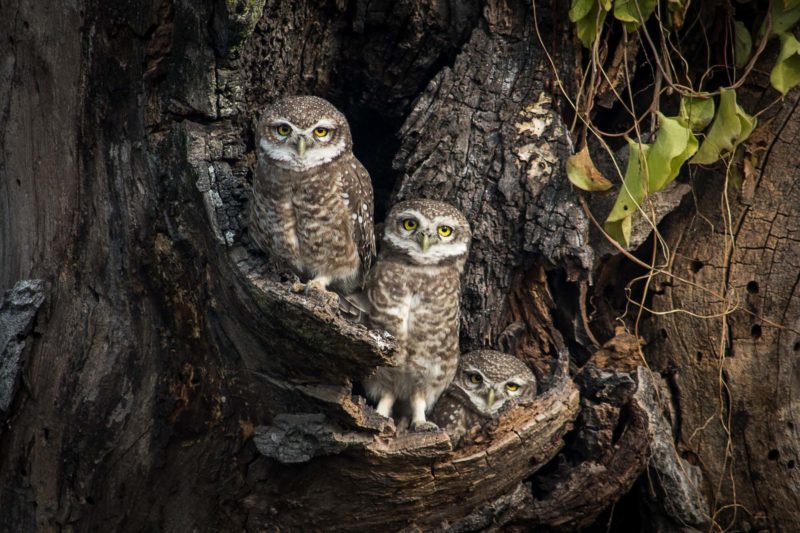 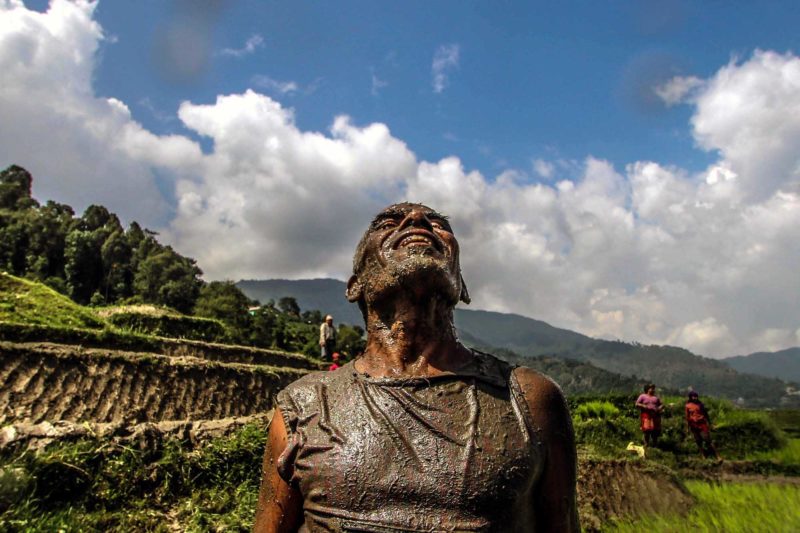 An elderly man has a jovial moment and relishes at a paddy plantation at Jitpur Fedi, Kathmandu. Third-place winner in the Nepal smiles category. Image by Sulav Bhakta Shrestha. Courtesy: Photojournalist Club, Nepal. 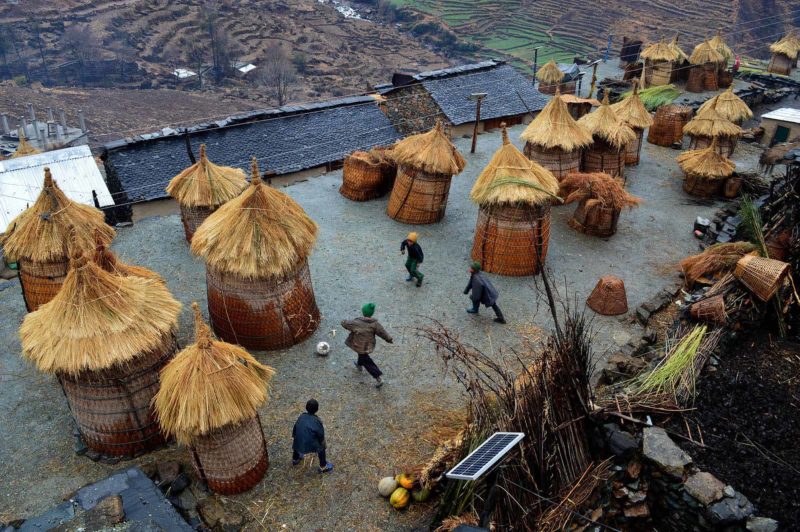 Local children playing football on the roof of a traditional house in Rukum's Taksera Village Development Committee. Since the hilly area with steep land lacks playgrounds, the children use the rooftops as an alternative. First-place winner in the sports category. Image by Surbindra Kumar Pun. Courtesy: Photojournalist Club, Nepal. 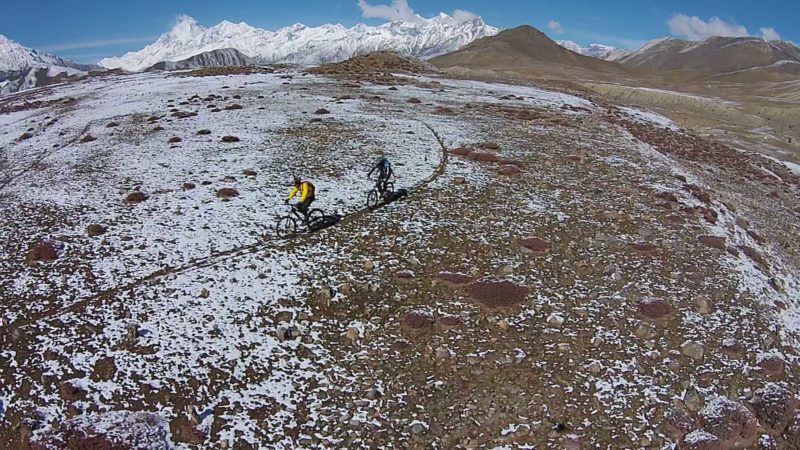 The top 150 photos of the competition will be put in an exhibition, which will tour five different Nepali cities.

Photos taken from the official press kit of the Photojournalist Club, Nepal.