The citizen-led initiative Ohrid SOS, which fights harmful urbanization projects in and around Macedonia's ecologically rich Lake Ohrid was recently the target of an impersonation attempt. Ohrid SOS activists suspect local authorities were involved in the incident.

Early on the morning of July 26, a local journalist alerted Ohrid SOS of an email sent to his media organization from an email address similar — but not the same as — the official Ohrid SOS email. The email contained a press release asserting that Ohrid SOS  “fully supports the efforts of Nikola Gruevski to protect the lake, who as a leader of the largest party in the country made this promise and so it will be done.” This couldn't be further from the truth.

In fact, Ohrid SOS is fighting to stop a government project to build three tourist development zones and a luxury housing complex on the shores of Lake Ohrid, along with a marina inside Studenchishte Marsh, which serves as the lake's natural filter. Both domestic and foreign scientists agree that these developments would put serious pressure on the ecosystems of Europe's the oldest lake and could lead to long-term ecological degradation of the area, which is home to an estimated 200 unique species. Ohrid SOS is a group comprised of environmental activists, scientists and concerned locals.

The original text of the email follows: 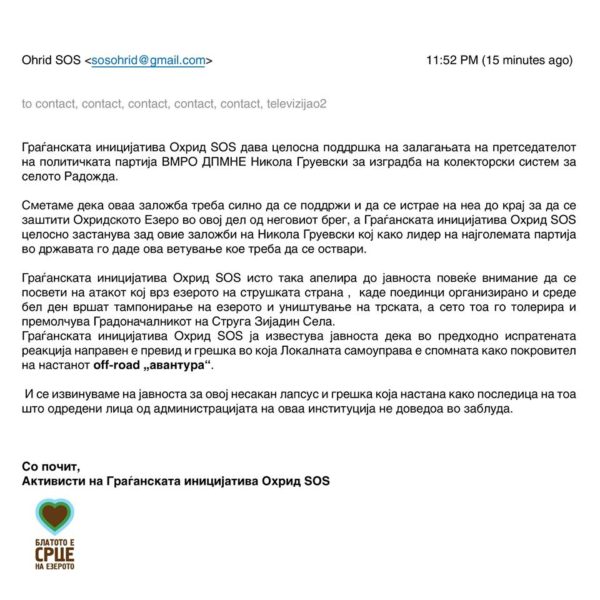 False email sent from sosohrid@gmail.com. Used with permission from OhridSOS

The Citizen Initiative Ohrid SOS fully supports the efforts of Nikola Gruevski, the president of the VMRO DPMNE political party, to build a collection system for the village of Radožda.

We believe that this commitment should be strongly supported and seen through to the completion to protect the lake in this part of the coast and the Citizen Initiative Ohrid SOS fully stands behind these efforts of Nikola Gruevski, who made this promise as a leader of the largest party in the state.

The Citizen Initiative Ohrid SOS also appeals to the public for more attention on the issue that Struga Municipality allows individuals to cut down the reed belt on that side of the lake in broad daylight, and all this is tolerated in silence by the mayor of Struga, Zijadin Selah.

Ohrid SOS citizen initiative informs the public that in a previously sent reaction we made a mistake when mentioning the local government as a sponsor of the off-road “adventure” event.

We apologize to the public for this unwanted mistake and for the consequences it caused, stemming from the fact that certain people in the administration of this institution have led us to the wrong conclusion.”

The sender/s of the email, who is unknown at this point, also used Ohrid SOS official logo and signature.

The Citizen Initiative Ohrid SOS published a statement the next day rejecting the false statements made in the press release:

We would like to inform the public that certain individuals and groups have falsely represented themselves as OhridSOS. Namely, yesterday on 25 July 2016 at 11:52 pm late evening, several media received an email from sosohrid@gmail.com containing a press release signed by OhridSOS.

We hereby declare that email was not sent from the Citizen Initiative OhridSOS, nor members or supporters of the initiative. OhridSOS has only one official communication email which is ohridsos@gmail.com.

The citizen initiative OhridSOS publicly disassociates from all statements, press releases and emails sent from any email different from ohridsos@gmail.com. We demand an urgent recantation from all media that have published the false press release so far.

We warmly recommend to Ohrid Municipality officials and the ruling party that instead of dealing with false representation — which is a crime in this state — that they instead focus on the more serious issues in the municipality, like the spill out of fecal water inside Lake Ohrid in the middle of tourist season (video here) that is endangering the health of visitors to Ohrid region. 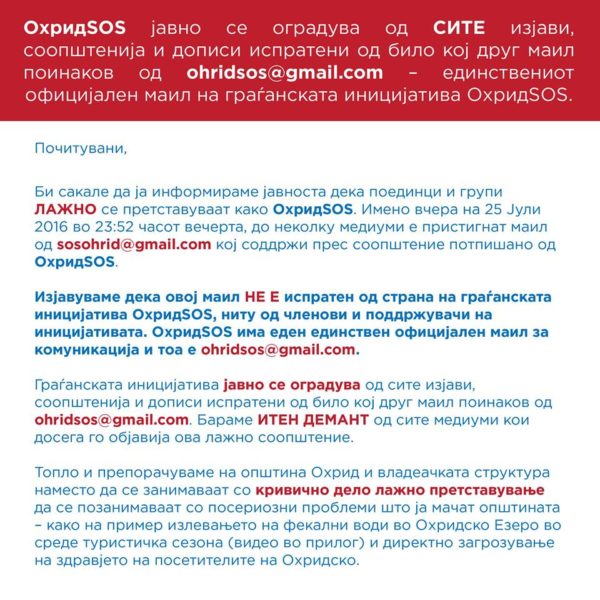 In this statement Ohrid SOS activists also wrote that due to the content of the false letter and the various mentions of the VMRO DPMNE political party, they suspect that this was done by a member of the ruling party. Ohrid SOS further suspects that the letter was sent by a current employee in the municipality of Ohrid, which has targeted them in the past.

The incident did not end there. Another false press release sent out from that same email — sosohrid@gmail.com — that afternoon, saying that they are the only Ohrid SOS, that they have already registered the name and the NGO and will sue the real Ohrid SOS for using the name. English translation appears below screen shots. 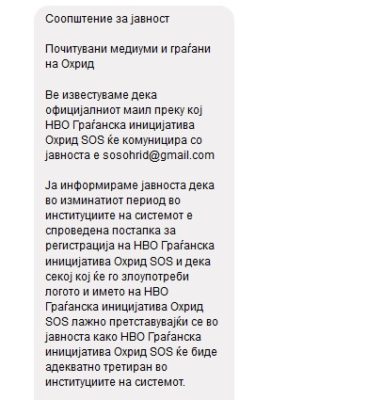 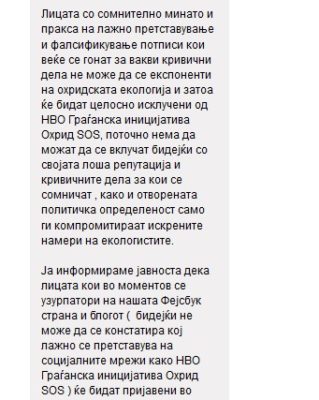 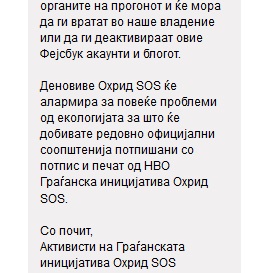 Dear media and citizens of Ohrid

Please note that the official email through which the NGO Citizen Initiative OhridSOS will communicate with the public is sosohrid@gmail.com.

People with a dubious past or practice of misrepresentation and falsification of signatures that have already been prosecuted for such crimes cannot be exponents of ecology in Ohrid and will therefore be completely excluded from the NGO Citizen Initiative OhridSOS, ie they cannot be included due to reputational concerns and crimes they are suspected of having committed. Such a political affiliation will only compromise the honest intentions of environmentalists.

We inform the public that people who are currently usurpers of our Facebook page and blog (since we cannot yet determine who is falsely representing the social networks of NGO Citizen Initiative OhridSOS) will be reported to law enforcement authorities and will have to return in our possession or deactivate these Facebook accounts and the blog.

In days to follow OhridSOS will alert about more environmental problems for which you will receive regular, official press releases signed with the signature and stamp of the NGO Citizen Initiative OhridSOS.

With respect,
Activists of the citizen initiative OhridSOS

But a search for OhridSOS and variations on the name in the Central Registry of the Republic of Macedonia (seen below) yields no such information. The name is unclaimed and available for registration. The actual OhridSOS group is a volunteer citizen organization and therefore does not require registration. 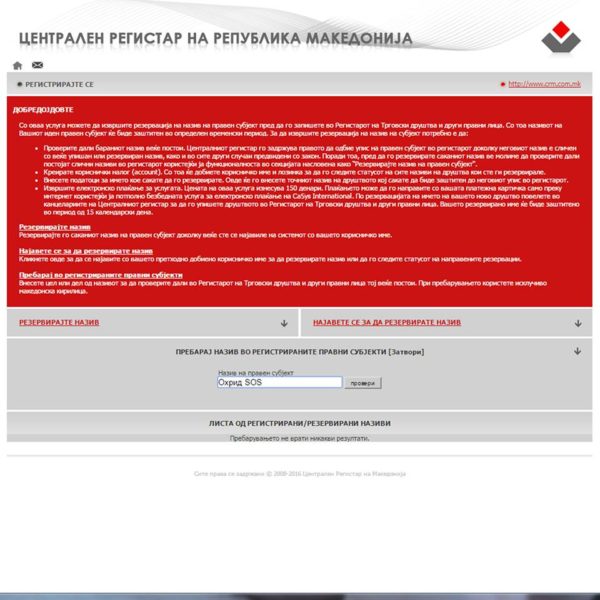 This is not the first time the Macedonian ruling party VMRO-DPMNE has done this. In the last two years they have organized a contra-camp to a protest camp, a contra-protest to a citizen protest and a couple of new media that popped up out of the blue using the same combination of names only in reverse: NovaTV and the very recent TVNova, RadioSlobodnaEvropa and brand new RadioSlobodnaMakedonija.

In late June 2016, there was an off-road tour organized inside protected red zones of Galichica National Park, which abuts the lake. The mayor of Ohrid municipality, Nikola Bakracheski, gave his public support at the opening of this event. OhridSOS responded with a harsh press release, criticizing the event and the support from Ohrid municipality and the officials at National Park Galichica, who are supposed to protect the park. OhridSOS suspects this press release may have triggered the impersonation incident, in an effort to discredit the group and other activists.