Remembering the Yugoslav Anti-War Movement of the Early 1990s 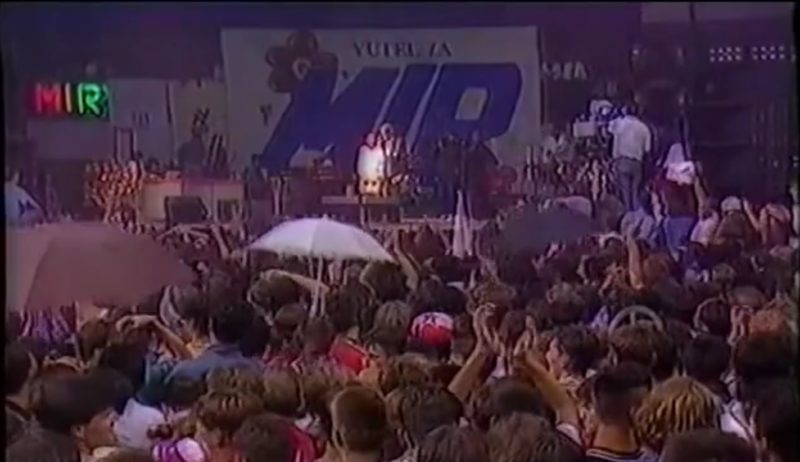 It's summertime in the former Yugoslavia, when nationalist passions run high, as people look back on the wars in the 1990s that tore the nation apart. This July, some Internet users decided to go a different route, remembering the proud, albeit unsuccessful, attempts to stop those wars.

Traditionally, political elites in the region have used the war anniversary to provoke ethnic and religious tensions by organizing state celebrations and making inflammatory public statements, including denials of genocide and war crimes established by international courts, sometimes resulting in media frenzies.

The two most politically charged anniversaries are the July 1995 Srebrenica massacre in Bosnia, and the August 1995 Operation Storm in Croatia. (The former is the internationally-recognized genocide of the ethnic Bosniak population by Bosnian Serb forces. The latter is a major military victory by the Croatian Army, resulting in ethnic cleansing of ethnic Serb population in the region of Krajina.)

Fed up with the tendency to exploit these anniversaries for divisive political purposes, some Internet users throughout the region have tried to refocus the public's attention on anti-war efforts from the early 1990s. This approach breaks with official histories and most mainstream media coverage, and creates opportunities for “true reconciliation,” activists argue. The effort combines both spontaneous individual acts and organized activities.

For example, the Serbian Twitter user Zoran Torbica posted a link to a video clip with the first public performance of the anti-war music super-group Rimtutituki, held on March 8, 1992, in Belgrade.

It took serious courage to ask for peace in '92. If they had listened to us, who were kids at the time, there wouldn't have been war…

After the authorities refused to allow them to organize a concert, the band performed on the back of a truck, driving through the streets of Belgrade. The video documents the performance and the participation of thousands of young people, who protested against the war and conscription.

July 29 also marked the 25th anniversary of a massive pro-peace rock concert held in Sarajevo. The Zetra Project has worked to document this event and inform people at home and abroad about its importance. As an article published on Balakanist.net explains:

Due to a bad weather forecast, the concert was relocated to Zetra at the last minute. A Sarajevo taxi company ferried thousands of people from the original outdoor venue for free. An unprecedented 30,000 people amassed inside Zetra, while another 50,000 gathered around the sports hall to hear the show from outside. The concert was organized and broadcast by the Yugoslavia-wide television station Yutel and carried the name Yutel za Mir (Yutel for Peace). Yutel for Peace was the culmination of earlier peace protests in Yugoslavia uniting anti-war activists from all over the country with Yugoslavia’s most popular rock bands in a collective effort to save Yugoslavia from war and dissolution.

The working languages of the Zetra Project are the local Serbian, Croatian, and Bosnian, as well as German. The project's website hosts interviews with several people who attended the concert about what it was like to be there, and what its ramifications were at the time:

The “Zetra Project” is an online space where people that were at the Zetra Hall concert can meet once again. We are collecting stories from people that were actively engaged in promoting peace, who were at the concert, and have a connection to the peace movement. They can tell us their stories so that the memory of the movement remains alive. But also to remind others that back then people around the country wanted peace.

Jadranka Pejaković Hlede, who as 13-year-old girl in 1991 gathered 11,586 signatures for peace with her friends from Tuzla, also shares her memories:

My 11,586 signatures for peace were a utopia[n dream], and it's really ridiculous when I remember the conviction I had while collecting them. It was an effort, for days from morning to evening—a mission. I recall how it all started, what I thought about, even where I set when I decided to start the action. The story soon grew beyond my expectations. If nothing else, those 11,586 people enabled me to retain the faith in humankind.

In the following years, Pejaković Hlede witnessed the horrors of war in Bosnia, including the “liberation” of her birthplace, Prijedor, including murders in the streets and her neighbors being forced into concentration camps. Her father, a man who before the war avoided weapons, ended up buying a hand grenade and hiding it on the balcony of the family's home. He planned to use it to “save” the family from torture, in case “liberators” operating a sniper's nest one floor above decided to try to break in and rape all the women. The family later fled their home, fearing for their lives.

Now 38 years old and a mother of two, Ms Pejaković Hlede lives in Zagreb, Croatia. In her testimony for the Zetra project, she connects her suffering with current events:

I sometimes have doubts about my remaining humanity—even about my sanity. As people say “Who is the lunatic here?” Take, for instance, the current refugee crisis. I see those poor people and children who have put all their lives in a bag and crossed seas, rivers, countries, borders, barbed wires, and corridors in search for a better life. Yes, maybe among them there are hidden some criminals, some bad men, which can be found in all populations. But generally they are impoverished people who don't know where or how they are going to live. They just know they have to save their lives and their children at any cost. Uh, I know that feeling, it's a terrible experience, every little image becomes imprinted as if you are branded as cattle, remaining forever. On their faces I see the horrors they've endured and cry for them, loudly or silently, whenever I watch media coverage about them. And I think that every person should see them and sympathize with them in the same way.

I was convinced that all my close friends and acquaintances think the same. And then I hear anti-refugee, anti-human, nationalistic, and sadistic comments by seemingly normal, cultured people—the same people with whom you've chatted about everyday issues only yesterday. I see that as biggest defeat of humanity. How can you, not branded by war, personal horrors, under no danger, completely ignorant about the characteristics of those people—how can you become so “fired up,” selfish and misanthropic? I am appalled by such people around me, because they are so many, because I can't explain to them, because their children will sit with my children at some playground exchanging opinions. What if there are too many of them, what if my children believe them? And wherever on the world one peeks, no matter whose evening news you watch, there's the same human hatred, suffering, and danger. This is very worrisome for us, for the people who are optimists like me.

Note: The anniversary of the 10-day Slovenian war for independence, which lasted from June 27, 1991, until July 7, 1991, also technically falls within this period, but that event has not been considered controversial, and consequently has not been a part of history typically used to “stir up passions” around this time of year.