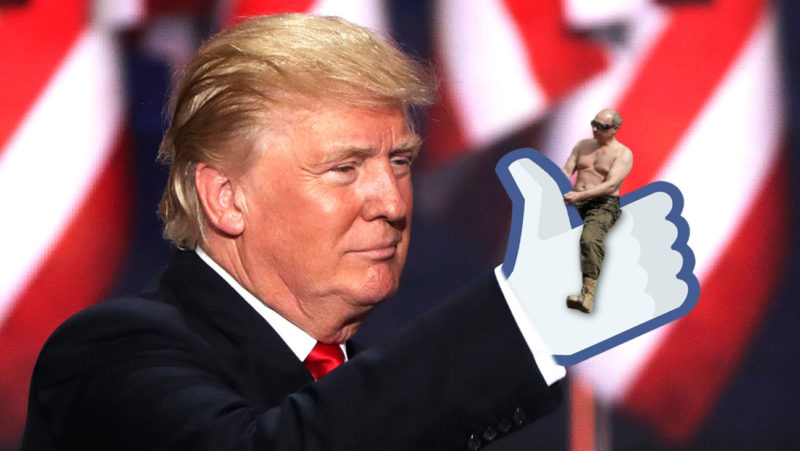 Over the weekend, RuNet Echo published [2] comments by more than a dozen public intellectuals, addressing an apparent lack of interest in Russia's supposed role in hacking the Democratic National Committee ahead of the party's national convention last week. In this article, Yulia Savitskaya takes a different approach, focusing on the many Russian Internet users who are in fact interested in the US presidential race and, in particular, Donald Trump's candidacy.

If you have many politically engaged Russian friends on Facebook, you might have already noticed that they care about the US elections a lot. Probably much more than you care about the upcoming parliamentary elections in Russia. For some of them, it is a substitute for Russia’s non-existent high-level political race, while others use it as a way to express themselves and their opinions. Apparently (and, perhaps, unsurprisingly to some) many of these Russian users support Donald Trump, or at least profess sympathy for him.

The first, largest (and probably the least interesting) group of Russian Trump supporters are those who are not really involved in the US presidential campaign. They did not follow the primaries, the debates, and the conventions, but they have probably heard Vladimir Putin calling Trump “a talented and colorful person.” They have also seen and maybe even flipped through the pages of Donald Trump’s infamous [3] books on being a millionaire and closing successful business deals. Finally, they have seen Trump hanging out with Miss Universe contestants—what’s not to like about this guy? Trump’s quotes on money, success, business, and women are published and republished by hundreds [4] of motivational [5] self-help communities [6] on Vkontakte, Russia’s biggest social network. (Needless to say, half of these quotes are fake.)

The second group is more complicated and very diverse. These users do not necessarily like Trump that much, but they hate Hillary Clinton fiercely, so they wish Trump would win just to spite the Democrats. One example is Ivan Yakovina, a Russian-Ukrainian journalist who used to support Bernie Sanders at the earlier stage of the US presidential race. After Bernie endorsed Hillary, Yakovina accused him of betrayal—something that some of Sanders’ American supporters have done, as well. By July 26, the journalist was referring to Trump in Facebook posts as “a populist,” while Clinton, in his opinion [7], is “a dull, lying, utterly corrupted fool.” The Republican presidential candidate’s sense of humor appeals to Ivan: on July 27, Yakovina admitted [8] that Trump is “a good troll.” Yakovina might not evolve to become a true Trump supporter, but he said he would be glad to watch the Democrats lose after the “unfair expulsion” of Bernie Sanders from the race.

Dmitry Olshansky, a columnist at the pro-Kremlin tabloid “Komsomolskaya Pravda,” has nothing in common with Ivan Yakovina, but they still belong to the same group in their views on Trump. Olshansky has recently described Hillary Clinton as “pure evil [10],” and compared Donald Trump, “by contrast,” to the “fresh breeze from an open window in a room that had not been aired since Nixon’s 1970s.” Trump seems happy to encourage self-proclaimed Russian patriots like Olshansky, judging by his most recent comment on Crimea [11].

The third group appears to be following the US race intently. Mostly media professionals, these Russian Facebook users are particularly interested in US media coverage of the elections, and they are not happy with what they see: there are some recent examples of Russian journalists harshly criticizing their American colleagues. Alexey Kovalev is a former InoSMI chief editor, whose most recent personal project “Lapshesnimalochnaya [12]” (Noodle Remover) is devoted to revealing Russian state propaganda's lies and debunking media fakes. Kovalev does not like the “anti-Trump campaign” some US media seem to be waging, either.

He recently accused [14] Slate of “xenophobia and orientalism” after it published a piece [15] about Melania Trump plagiarizing Michelle Obama’s speech. In that piece, Slate’s Rebecca Schuman assumed that Melania Trump did plagiarize the speech because she’s a first generation immigrant unaware of the “American way of succeeding.” On the same day, a more academic piece [16] on the same matter, alluding to the Eastern European culture of academic cheating as the root of Melania's plagiarism, appeared in the Washington Post, and provoked sharp criticism [17] from Eastern European scholars. After making himself familiar with dozens of such reports, Kovalev wrote that he wished [18] Americans would elect Trump in order to drive insane the “douchebags who see their readers as idiots.”

Aleksandr Gorbachev, a former Afisha chief editor who now works for Meduza, was annoyed by a New York Times piece titled “Why Men Want to Marry Melanias and Raise Ivankas.” “Every time I read something like this, I hope Trump wins,” the journalist concluded [19] in a Facebook post. Alexey Kovalev later added that America “deserves Trump” because the US Democratic media is so “unconvincing [20].”

As the rumors about Trump being backed by Putin spread, more Russian Facebook users joined the discussion. Ilya Yablokov, a historian and conspirology expert, wrote [21]: “Some of the ideas that pop up in the op-eds linking Putin and Trump remind me of the allusions used by the McCarthyists in the 1940-50s. The irony, however, is that today it's the left-wing intellectuals who spread them.”

It's not hard to guess what will come over the next several months: Trump will continue “trolling” the media, and the politically engaged Russian Internet audience will inevitably keep watching him, taking short breaks to discuss the doping scandal, the nonfunctioning storm-water drain systems in Moscow, and other domestic stories and controversies. For some, the US election is an important event that's worth their attention. For other Russians, it's a welcome diversion from the unsettling news closer to home.