‘This Is a 99.99 Percent Democracy’ and Other Orwellian Newspeak by Thailand's Junta 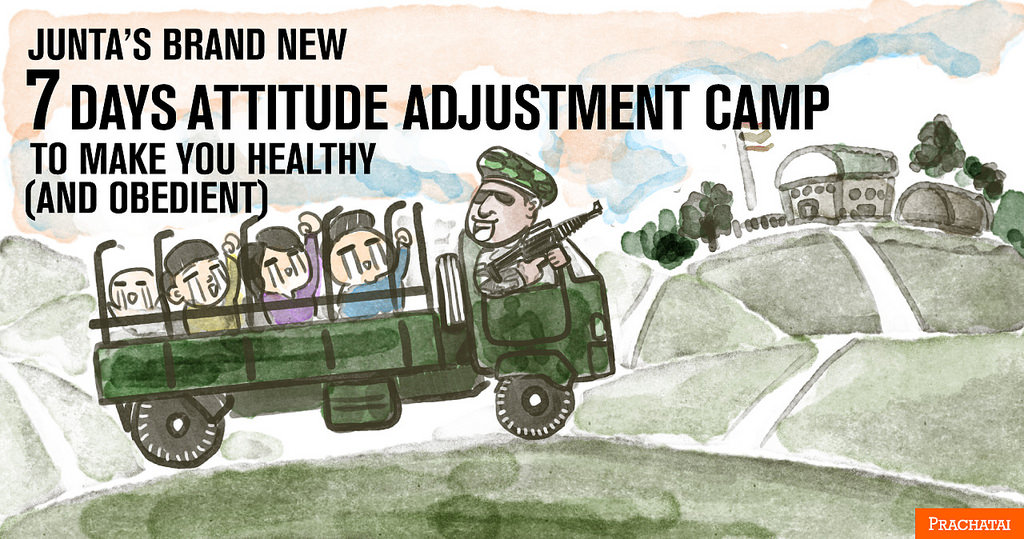 This edited article by Kornkritch Somjittranukit is from Prachatai, an independent news site in Thailand, and is republished on Global Voices as part of a content-sharing agreement. The Thai army grabbed power in 2014 and continues to control the government despite its pledge of restoring civilian rule once political and electoral reforms have been implemented. A constitutional referendum is scheduled on August 7 but critics believe the draft constitution will only reinforce military rule in the country.

Thailand’s junta has long puts its faith in the power of language, using carefully-chosen words and phrases to describe and promote its activities. Here are a few examples of how the junta has reframed and redefined political terminology of Thailand over the past two years.

1. It is an ‘attitude adjustment session,’ not detention.

The term “attitude adjustment” was the very first example of newspeak by the junta. After the coup was staged, the junta repeatedly summoned people to military camps, mostly politicians, media personnel and activists seen as a threat to it. The military has the power to detain them for up to seven days. Neither media nor lawyers are allowed into the camps. It is basically arbitrary detention without charge or court oversight. The detainees are lectured by military personnel about the necessity of having the junta in power.

In some cases, the junta authorities, mostly soldiers, have approached individuals, including journalists, academics and politicians, who have criticized the junta regime. This is an alternative form of intimidation since an official summons for attitude adjustment usually triggers public outrage.

Generally, such visits take place in a public cafe or restaurant and the military will treat its guests to coffee or tea. Therefore, the junta always says that what they do is not intimidation, but rather just a chilling ‘coffee talk’.

Pravit Rojanaphruk, a senior reporter who was invited to a so-called coffee talk with the military, shared his experience:

Although they (the junta personnel) treated me well and politely, it is anyway ‘polite’ intimidation. It makes me feel that the freedom of expression and criticism against the government which we used to have under elected governments has gone.

3. They are not ‘junta opponents’. They are ‘influential figures’.

On 29 March 2016, the junta issued NCPO Order No. 13/2016 which grants the military police-like powers to crack down on local mafia and ‘influential figures’ across the countries. The order immediately raised international concerns since it is equal to extra-juridical power.

When it came into practice, the public increasingly condemned the order since the so-called ‘influential figures’ who were prosecuted under the order are mostly junta opponents including community rights advocates, human rights defenders, and social activists.

4. It is not silence, it is ‘reconciliation’.

Any attempt at criticism of the junta, the draft constitution, or the referendum is prohibited. The junta’s silencing method is pretty interesting. It rarely bans or shuts down the media directly, but rather issues a variety of laws making the media too paranoid to do their work freely. For instance, whenever reports on the anti-draft charter campaign are published, the ‘Vote No’ message on a campaigner’s t-shirt is usually deleted out of concern that the message could breach the controversial Referendum Act.

The closer to the August referendum, the more intense intimidation gets. In the past month, the junta has set a new standard of intimidation by arresting a journalist, summoning a journalist’s wife, prosecuting an activist’s mother, and pressing charges against children under the legal age. However, all of these violations of human rights practices were justified for the sake of so-called “social reconciliation.”

Political cartoon in today's Bangkok Post about the upcoming referendum in #Thailand pic.twitter.com/0Dwjyp5fqP

The junta is obsessed with the laws and orders they have written themselves. They usually issue regulations with severe punishments to prohibit people from sharing opinions against them. This is to make sure the country will move forward peacefully and silently. In only two years, a variety of authoritarian regulations, including NCPO Order No. 3/2015, the Public Assembly Act and the Draft Referendum Act, were issued. The junta has just approved an amendment of the controversial Computer Crimes Act to increase punishment and surveillance measures. The junta even once used the Public Cleanliness Act to press charges against pro-democracy activists when it could not prosecute them under more authoritarian laws.

Is this a human rights violation? No, do not call it that. The junta justifies these authoritarian practices, saying that it does not have to care about the human rights of those who break the law.

6. It is not an authoritarian regime, it is a ‘transition period’.

“Transition period” is arguably the most common term in the junta’s newspeak. Whenever the junta faces public criticism, it usually repeats this term to remind the public that this is not a normal political climate where people can freely express their ideas. However, the junta never explicitly explains where exactly the ‘transition’ is going to end – in democracy, semi-democracy, a full military regime, or the era of the new throne.

On 23 March 2015, Prayut Chan-o-cha, the junta head, accepted that Thailand under the junta regime is not fully democratic. However, compared with the political situation in neighboring countries, he said, Thai politics was far better and could be called a 99.99 percent democracy. Prayut insisted that

Our country nowadays is 99.99 per cent democratic. I never prohibit anybody from criticizing me, just don’t oppose me. If you were in other countries, you would be probably in jail or executed by shooting.

On 10 November 2015, General Udomdej Sitabutr admitted to the media that there were kickbacks paid in the construction of Rajabhakti Park, a park with seven statues of the prominent past kings of Thailand. As a Chairman of the Rajabhakti Foundation, Udomdej accepted that officials had asked the foundries hired to make the seven statutes to give them kickbacks. However, Udomdej said that all the kickbacks had already been donated to the project, The Nation reported.

However, a self-investigation by the Royal Thai Army concluded that there were no kickbacks in the construction process. There were only huge ‘consultant’s fees.’

9. It is not a ‘foolish cost.’ It is a ‘fairly expensive cost for knowledge’.

From 2005 to 2009, British businessman James McCormick sold the Royal Thai Army hand-held bomb detectors called GT200. He also sold similar devices called Alpha 6 which were claimed to sniff out narcotics. The devices, which were later discovered to do nothing, cost 900,000 baht to 1.2 million baht each. A total of 772 devices were purchased. When the deals were done, Thailand had spent more than 1 billion baht (28 million US Dollars), reported Khaosod English.

In June 2016, after the British court sentenced McCormick to 10 years in jail for selling the bogus devices, the Thai public demanded a serious investigation to find the officials responsible. The Thai media usually refers to the wasted billion baht as a ‘foolish cost’ (kha ngo).

On 22 June 2016, Wissanu Krea-ngam, Deputy Prime Minister, told the media that the government will sue the vendors for compensation. However, he asked the media to avoid using term ‘foolish cost,’ but rather a ‘fairly expensive cost for knowledge.’