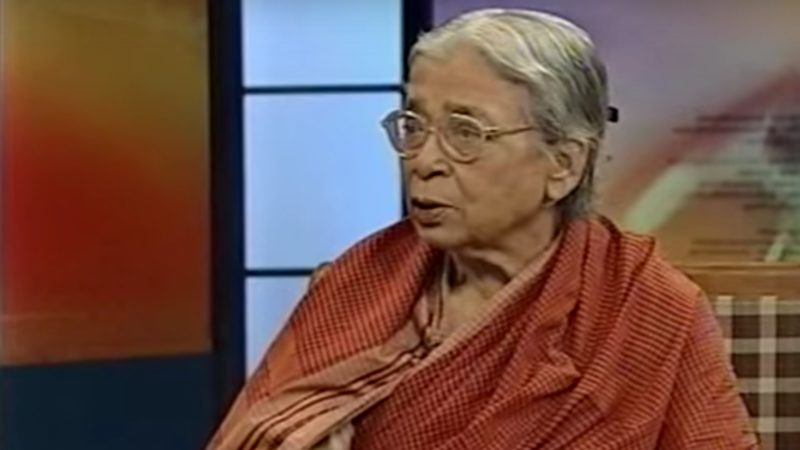 Screenshot from an interview of Mahasweta Devi with Rajiv Mehrotra

Renowned Indian Bengali writer and social activist Mahasweta Devi passed away aged 90-years-old on Thursday, July 28, 2016 in Kolkata. She was the wife of one of Bengal’s most prolific playwrights and literary figures, Bijon Bhattacharya.

Born in the tumultuous years of the British reign in India, Mahasweta Devi grew up in a family of artists, poets and social activists leading Bengal's literary movement (Kallol) at the time.

Surrounded and influenced by communist ideas all her life, she began her working life as a journalist in post-independence India and later went on to become an advocate for civil rights of indigenous tribes.

She published her first novel Jhansir Rani in the year 1956. She was best recognised for her work in improving the lives of the Kheria Sabar community.

The woman who walked with the broken and refused to sit with the ‘great'! Writer Mahasweta Devi passes away in Kolkata. What a life !!!!

She was one of the founders of Denotified and Notified Tribal Rights Action Group, whose work among tribal communities spread from Bengal, Gujarat to Maharastra.

Ganesh N. Devy, in a seminar in 2004 on ‘Celebrating Women: a symposium on women who made a difference’, spoke of his shared experiences with Mahasweta Devi:

I had by now observed that she spared no one, in particular snobs, ministers, insincere journalists and literary aspirants. […] She spoke of the civilizational graces of the adivasis, of how our society had mindlessly destroyed the culture of our great continent, and how the innocents had been brutalised. She described the context in which the infamous Criminal Tribes Act, 1871 was introduced, the process of denotification in 1952 and the plight of the nomadic communities in India ever since.

Draupadi, an important female character in the Hindu epic, Mahabharata, was the subject of a bet in a game by her husband Yudhisthir, who eventually lost her in a round of the game after losing everything else.

She was then forcibly dragged into court by his rivals who intend to strip her naked.

However, when Draupadi silently pleads to Krishna (a major Hindu deity), he aids her with an endless supply of sari cloth which the enemy is unable to strip away from her, and this act ultimately saves Draupadi from her public humiliation.

In her story the men succeeded in stripping the heroine naked.

Devi's audacity in depicting the plight of a tribal woman not only highlighted the different treatment of women across the social caste system but also the treatment women receive in the world as a whole.

Although Dopdi is stripped naked, she still stands as a symbol of strength.

Draupadi who tears up the rags they throw at her and flings them away, flaunting her nakedness in Senanayak’s face:

Draupadi comes closer. Stands with her hand on her hip, laughs and says, The object of your search, Dopdi Mejhen. You asked them to make me up, don’t you want to see how they made me?

Thus, according to Gayatri C. Spivak's English translation of the story, Dopdi escapes humiliation by refusing to put her clothes back on after being stripped of them, turning the shame back on Senanayak.

Mahasweta Devi's career spanned more than two decades and produced a timeless collection of literature driven by compassion for her compatriots.

Her status as an inspiration for coming generations of Indian writers is indisputable.

Condolences pour in for the late writer

Journalists and writers took to twitter to share their grievances, along with a number of prominent literary organisations.

Withher passes an era of public intellectuals who stood for marginalised n oppressed n gave them a voice. A living legend RIP #MahaSwetaDevi

Writers will come and writers will go but there will never be another Mahasweta Devi . Great writer, great activist , great human being .

RIP Mahasweta Devi. A terrible loss for literature. A great writer and extraordinary activist; a woman with a warm, generous heart.