In Nike's Ad About Female Athletes in India, Too Much Glamour, Not Enough Names? 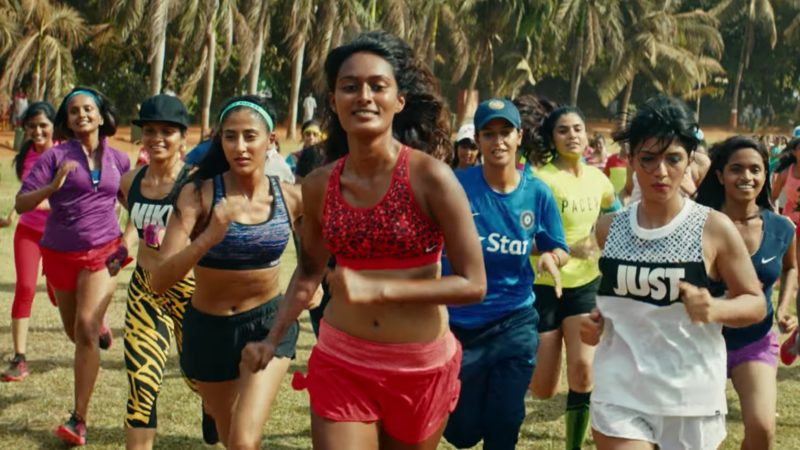 A recent advertisement by leading American sportswear company Nike featuring badminton player-turned-Bollywood actress Deepika Padukone and other sportswomen has faced criticism from some netizens in India for not identifying anyone but Padukone by name and for glamorising what strong Indian women look like.

The video, titled “Da Da Ding”, shows several Indian sportswomen playing their respective sports and purports to promote women's athletics. The lyrics of the song accompanying the video also suggest the same. Padukone herself explained the idea on her Facebook page, where she shared the ad:

And so I want to say to every girl and every boy and every woman and every man…play a sport…because it changed my life…and it will change yours too!

The video shared by Padukone has received 3.6 million views and thousands of likes and shares.

However, some weren't happy that the ad only spotlighted Padukone and didn't name any of the other sportswomen featured. Critics argued that this perpetuates the invisiblisation of women athletes in India:

That Nike Ad shows how little we know about female sportsperson or athletes in this country.

I am sure people who watched #DaDaDing video by Nike can't even name 5 female athletes who hv been featured in the ad. Kya fayda?

I wish Nike had made the ad about sports women without Deepika. Would have been more real. But then who would watch it!

Jaideep Vaidya at independent news site Scroll.in was of the view that it was a shame Nike took such an approach:

Nike itself does not name or feature any of the women from the ad on its website apart from Padukone, and leaves it to the media to publish the names from its press release or by themselves.

A pity, then, that despite breaking new ground in a country where brand-building hasn't really focused on women athletes, the ad drew attention to itself rather than the people it featured.

One Nike spokesperson reportedly admitted the fact that most viewers would probably not recognize the athletes in the ad.

Others came to the company's defense:

If you don't know a single athlete in the Nike Ad, then it reflects on you. Not on Nike, or the ad, or D Pad. 😂😂

Gender inequality in Indian society is the oft-cited reason behind prejudice towards women's sport. The lack of awareness of India's successful female athletes can be attributed to this built-in structural discrimination. Tennis star Sania Mirza, who is currently ranked number 1 in women's doubles tennis worldwide, had emphasized this point in the recent past as well.

‘Da Da Ding: The Other Women’

Successful female athletes aren't the only women largely ignored in India. A YouTube channel called Epic Spiritual made a spoof of the Nike ad titled “Da Da Ding: The Other Women” mashing footage from the Nike ad with videos of poor working-class women of India.

The video, which had received more than 85,000 views at the time of writing this article, conveys the fact that hardworking women from lower-income backgrounds in India have been “doing it, barefoot” — a clear dig at Nike's tagline “Just Do It” — without any glamorous representations or expensive footwear. Staff at Scroll.in commented:

[…] the other Indian women are profiled – the thousands who are part of the labour force, engaged in activities like farming or construction (their share in both is around 50 per cent) or just household activities that require carrying water over large distances day in and day out.

Some Twitter users enthusiastically responded to this parody video:

Been doing it!!!
The original @nike da da ding ad made poignant https://t.co/wpGQCTYcia

Nike's Da Da Ding ad campaign modified for the women who have been silently “just doing it” for hundreds of years https://t.co/4XJsFIurUA

The complex intersection of class and gender in a country full of inequalities like India will perhaps continue to provoke such controversies in the future as well.