Once, Students in the US Were Punished for Speaking Spanish. Here, They Are Honored. 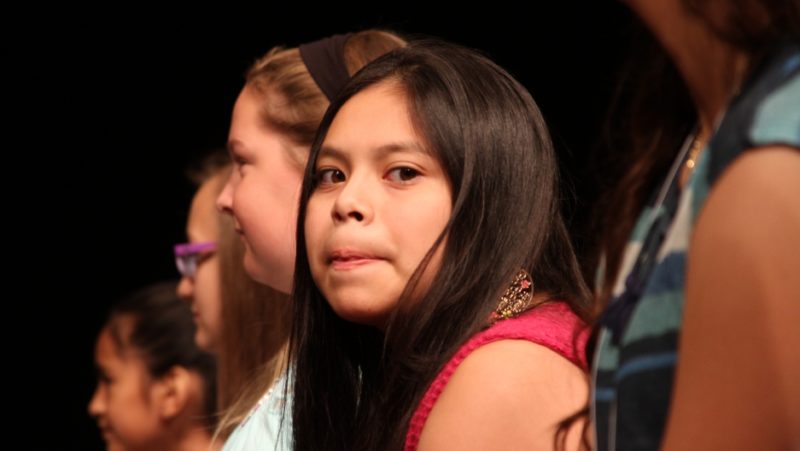 Kiara Rivas-Vasquez, a sixth-grader from Oregon, gives a confident smile to her mother who is watching on from the front row. Credit: Simon Thompson/PRI

This article by Simon Thompson originally appeared on PRI.org on July 27, 2016. It is republished here as part of a content-sharing agreement.

The amphitheater is humming: teachers hover, students murmur over spelling sheets and proud parents deliver the last gasps of pep talks. After final embraces and a tear or two, the spelling competitors are swept backstage.

It is sixth grader Jybr Reynoso Hidrogos’ second time competing. He made the top five last year, but fell short of a trophy. Every day since, he’s spent two hours or more practicing spelling. That’s what helped him beat out his classmates and win a preliminary contest to wind up here today.

“It seemed impossible and I am actually here. It is like a dream,” Jybr says.

This isn’t the Scripps National Spelling Bee that you watch on ESPN. This is Concurso Nacional de Deletreo en Español, the National Spanish Spelling Bee, held this month in San Antonio, Texas.

Words are drawn from the “Lista de Palabras,” a 1,448-long list of Spanish words. When contestants need a word repeated, defined or used in a sentence, they are encouraged to ask the judges in Spanish. They also have to correctly place any diacritical marks, like the tilde in artimaña (trick), the dieresis in ungüento (ointment) or the accent in constelación (constellation).

“It makes it hard sometimes,” says Jybr. “There some words where it seems like there is no accent — maybe you can’t hear it — but actually it is there.”

Jybr has been learning Spanish from the cradle. Though he is in the bilingual track at Bradley Middle School in San Antonio’s North East Independent School District, he mainly speaks English with his school friends.

His parents came to the US from Mexico before he was born. His father, Liborio Reynoso, says seeing his son compete in their native language is a massive point of pride.

“Oh man!” he says. “My first language, my native language. We want our language to grow up here in this country.”

It wasn’t that long ago that first-generation American citizens like Jybr were scolded for speaking Spanish at school and encouraged to abandon their native language.

The director of the Spanish spelling bee, David Briseño, grew up in the US state of New Mexico where his Spanish-speaking parents were convinced that teaching their children the language would hold them back. Now 60, he says he still hasn’t quite mastered Spanish.

“My parents went through the time when you were punished in school for speaking Spanish,” he says. “They wanted to make sure we weren’t getting punished.”

His parents, he says, were belittled, spanked or could have their mouths washed out with soap if teachers caught them speaking their native language. Many people don’t like to talk about this painful history, but another school administrator at the spelling bee tells me the same thing happened to her parents. At last year’s bee, José Reyes, a bilingual instructor from Gadsden Independent School District in New Mexico, told me that a teacher punished him for speaking in Spanish. He went to school in El Paso, Texas, in the 1960s and 70s.

“I used Spanish and I remember her taking me to the sink in the corner and washed my mouth with Borax, with soap. And she said, ‘You won’t use this language again.’” 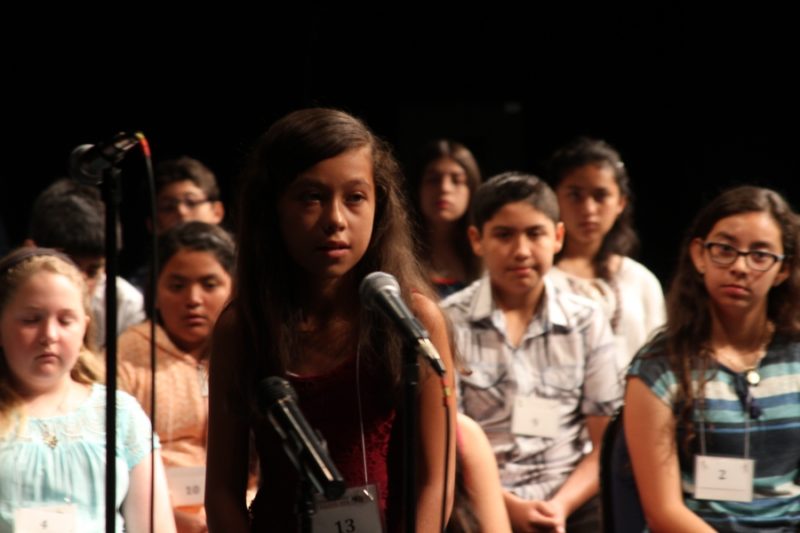 Briseño founded the National Spanish Spelling Bee six years ago to change these attitudes and to raise the status of the Spanish language in the US.

Efforts like his are making a difference. The benefits of bilingual learning gained recognition in 1968 with the Bilingual Education Act. The federal legislation encouraged school districts to incorporate native language instruction for children with limited English-speaking ability.

A 2010 study in the Review of Educational Research Journal surveyed 63 studies on the effects of bilingualism. It found that being able to speak multiple languages correlates with increased working memory, better problem solving skills a greater ability to pay attention.

It’s not just a boon for people who speak a language other than English at home. Briseño says more non-native speakers of Spanish are taking advantage of dual-language programs in schools too. According to the Harvard Education Letter, programs have increased tenfold in as many years. In 2011, there were around 2,000 programs nationally that teach in both English and a second language.

Native English-speaking students hold their own in the Spanish spelling bee. After three hours of tense rounds, three of the top five finalists are non-native Spanish speakers.

Joe Dooley is an eighth grader from Dedham, Massachusetts. He got eliminated just before the break for lunch.

“I did better than I thought I would,” he says. “I felt good when I got it [the words] right.”

Dooley is among the few spelling bee contestants who aren’t in bilingual programs at school. The US state of Massachusetts requires public schools to instruct only in English. According to the Massachusetts Association of Bilingual Education, only 33 schools in the state offer dual-language programs or immersion programs in languages other than English.

Dedham Middle School is not one of these schools, so Dooley takes Spanish as an elective. That’s where he found out about the Spanish Spelling Bee.

“I was really excited about it and I won in my class and then I came in third for the school and at regionals, I got in second,” Dooley says.

Massachusetts is considering legislation that would allow local school districts to choose the most appropriate instructional program for their students who are learning English. Changing the law could mix more English-language learners into dual-language classes with native English-speaking students like Dooley.

His mother, Liz O’Donnell says she hopes the dual-language model gets implemented at her son’s school.

“I would like to see it happen. I think it would be amazing, especially as we are going to become a majority minority country,” she says, referring to US Census Bureau projections that non-whites will outnumber whites in the next 30 years.

Concurso Nacional de Deletreo en Español had 11 contestants in its first year. In the past it was hosted in Albuquerque, New Mexico. At the spelling bee this year, there are 27 students, representing nine states: California, Colorado, Florida, Massachusetts, New Mexico, New York, Oregon, Texas and Virginia. About 270 students competed in state and regional competitions to make it to the national stage, according to Briseño.

William Moss is an educator in the Brentwood Union Free School District in Long Island, New York. The district is 79 percent Hispanic, one of the most Hispanic districts in the state. This is the first year New York is represented at the bee.

“A program like this, you would think in its sixth year, it should be already be in every state,” he says.

This is also the first year the national competition is being hosted outside New Mexico. Briseño says there were hopes the contest could reach a larger Spanish-speaking population and tap into a Hispanic media market with a move to San Antonio. But funding and exposure remain obstacles to growing the bee.

“We had another [contestant] coming in — actually from a territory of the US, the Virgin Islands — but they couldn’t raise the money to get here,” he says. “This is a labor of love and right now it is coming out of my pocket.”

By the last heat, the contest is now between Jybr and sixth-grader Kiara Rivas-Vasquez of Oregon. The competitors’ steps to the podium echo through the hall, seats creaking as the audience tenses before each word.

The audience lets out deep sighs of relief as spellings are confirmed. “Correcto,” the judge says in round after round.

The contestants rally back and fourth for what feels like hours (but is actually about 25 minutes) until Rivas-Vasquez slips up. She puts an “h” at the beginning of ermitaño, which means “hermit.”

Jybr can barely keep himself seated until he is called to take his turn. He strides up to the microphone. Smooth and deliberately, he spells it out: “E-r-m-i-t-a-ñ o.”

Jybr doesn’t celebrate or break focus as he looks back to the judges for the final word. If he spells it correctly, he will clinch the national title.

The word is Tahití, the island in the Pacific Ocean.

Jybr doesn’t ask for a definition, context or clarification.

The crowd rips into applause. Jybr releases a breath it looks he’d been holding for the last three rounds. Family, friends and teachers rush the stage to celebrate the new National Spanish Spelling Bee champion. He says he can’t wait to get back to school to tell his friends.

“They are probably going to say, ‘Oh my god.’ They are going to be so very impressed.” 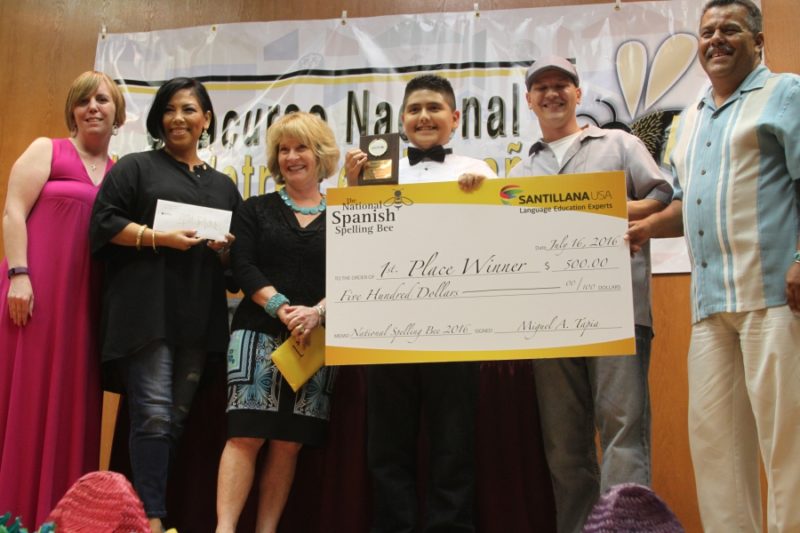 After winning with the word “Tahití,” Jybr Reynoso Hidrogos of Texas is presented with the 2016 National Spanish Championship and $500 in prize money. He is surrounded by organizers of the spelling bee, and the founder and director, David Briseño, who is at the far right. Credit: Simon Thompson/PRI