Irom Sharmila’s Long Protest Is Over, but Military Impunity in Northeast India Continues 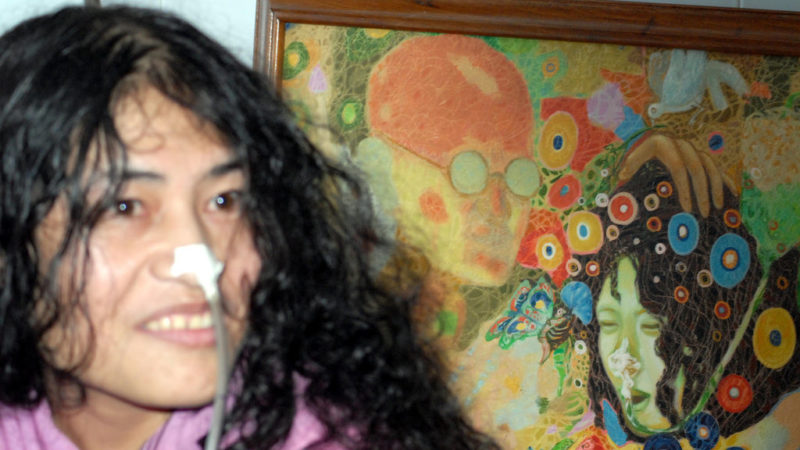 This week there was one news item that brought relief to many Indians.

Irom Chanu Sharmila, also known as the ‘Iron Lady’ of the Indian state of Manipur, has decided to end her world-record holding 16-year fast. ‪

Sharmila started the non-violent protest in November 2000 and her main demand was the repeal of the Armed Forces (Special Powers) Act (AFSPA) that has granted government forces de facto impunity in their bid to rein in militants and separatists active in the region.

All of these years she has been kept detained in a hospital in Imphal, the capital of Manipur, and has been force-fed through a tube in her nose on the basis of a law that prohibits suicide.

‎In a statement, she stated that she no longer feels she can win the battle against ‪the AFSPA‬ through fasting alone.

She has also made clear her wish to get married and act as a candidate in future elections to the state legislature, where she plans to continue opposing the law.

Wow! After 16 years-Irom Sharmila to quit fast. Symbol of resistance in Manipur-wants to contest next elections.Aug 9-last day of her fast.

Great decision Irom sharmila. Truly your fight will be remembered by the masses

Sharmila began her protest in November 2000 after 10 people including two children were killed by troops of the Assam Rifles (a paramilitary force) by a bus stop near Imphal.

Sharmila was detained after being charged under Section 309 of the Indian Penal Code for an attempt to commit suicide by launching an indefinite hunger strike.

She has been released and re-arrested every year since her hunger strike began and was hailed as an “icon of public resistance” in the region where the central government remains unpopular.

Earlier this year a court ordered her release from judicial custody.

While her actions sparked controversy, there is no doubt that forces loyal to the central government continue to enjoy extensive impunity while operating in conflict-ridden Northeast India (including Manipur and Kashmir) under the Armed Forces Special Powers Act (AFSPA).

The AFSPA was legalized in Manipur in 1958.

Marking half a century of the law 2008, Mukul Sharma wrote on Kafila.org:

It is a law in force in large parts of the northeast that gives armed forces special powers in a locality declared as ‘disturbed area’. However, while AFSPA is considered necessary by the state and army officials to protect the state against internal disturbances, to uphold the integrity of nation, to fight against terrorism and insurgency, and to protect sensitive border areas, it is being vehemently opposed and discarded by human rights groups, women’s organizations and political groups, as it is seen as facilitating grave human rights abuses, impunity, rape and torture, and silencing of democratic dissent.

Violations by security forces operating in the region are well documented despite a lack of interest on the part of the national press.

AFSPA violates the fundamental constitutional rights  of right to life, liberty, freedom of speech and expression, peaceful assembly, free movement, practice of any profession, and protection against arbitrary arrest and freedom of religion, as enshrined in Articles 21, 14, 19, 22 and 25 of the Constitution.

‘There is no sense in dialogue, I want a repeal:’ Watch Irom Sharmila, real life (and theatre) hero https://t.co/2Np39PiOti

The second part of the series focuses on “unsolved” massacres in Manipur, stretching from 1984 to 2000, when Sharmila's protest began.

Recently, in a landmark judgment the Indian Supreme court agreed to a probe into some 1,528 alleged cases of extra-judicial killings by security forces in Manipur from 2000 to 2012.

The court also opined that there is no right to impunity for the armed forces operating under the AFSPA.

I think it is time we applaud her and the struggle of the Manipuris instead of ignoring this news like it’s a daily activity. Because, it isn’t.

The national media ignored her. Like an anniversary celebration, they used to show her fast, year after year, one, two, three up to fifteen. Then forget it. They never pushed for what she wanted – to repeal AFSPA. They made the story about the fast, never why she was fasting. They decided to highlight the messenger instead of her message. Maybe that gave them more TRPs.

Welcoming Sharmila's decision to cease the fast while remaining politically active, the Save Sharmila Solidarity Campaign (SSSC) noted the long wait for fundamental rights in Manipur, along with other northeastern states and Kashmir, where people’s lives continue to be terrorised by the military.

The omnipotence of AFSPA, the presence of other inhumane legal provisions (like the Disturbed Areas Act, which was put in place in Manipur in 1980) and the absence of a system for holding out-of-control military personnel to account have amalgamated to form a juggernaut of injustices.