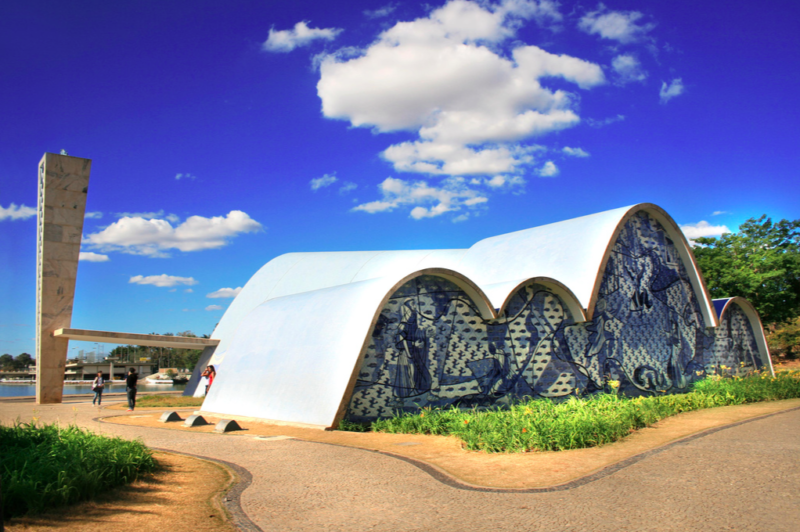 The UNESCO candidacy for Pampulha started in 1996 as one item on a list of many of Brazil's worthy heritage locations. However, it was only in 2012 that the Belo Horizonte government doubled down on its efforts, which finally bore fruit four years later—and for good reason. UNESCO's webpage for what is now Brazil's 20th World Heritage site hints at the factors behind its decision to bestow such an award:

The Ensemble comprises bold forms that exploit the plastic potential of concrete, while fusing architecture, landscape design, sculpture and painting into a harmonious whole. It reflects the influence of local traditions, the Brazilian climate and natural surroundings on the principles of modern architecture.

Surrounded by blue-tile panels painted by Brazil's best-known painter, Cândido Portinari, the Pampulha Ensemble includes a uniquely-shaped church, seen in the image above. Built in 1943 with the assistance of engineer and poet Joaquim Cardoso, the São Francisco de Assis Church abandoned architectural norms in favor of its groovy exterior and vaulted ceilings.

Its seductive curves were the cause of societal scandal at the time. Niemeyer, who was a lifelong Marxist, is said to have designed the church to represent the symbol of communism (although he never confirmed this himself).

And while the building's design spoke loudly, the church bell remained silent until 1959. According to the author Marcelo Cedro in a paper on Kubicheck and the Pampulha church, the absence of a cross caused Dom Cabral, the Archbishop of Belo Horizonte, to say “without the sign of the cross, the curves seem to want to pierce the soil in search of darkness.”

Cedro went on to say that the long-lasting non-consecration of the church may have been retribution for its “sins”—not only its sensual design, but the ostentation of the Ensemble, which included a casino.

While it was considered heresy by the Catholic Church, the city government called it a monument and bestowed upon it historical and artistic heritage status.

As for the Casino, it was originally planned as the Pampulha Ensemble's central element (perhaps due to Juscelino Kubitschek‘s love of gambling). Designed in a single night by Niemeyer, and built in 1942, it quickly became the place to be for Belo Horizonte's high society, even attracting sightseers from afar.

Aside from gambling, people also visited the location to enjoy live music and the dancefloor, as well as an almost circus-like experience of artistic performances. The casino as an idea, however, was short-lived due to a presidential decree banning gambling in 1946. It would take another eleven years before the building was repurposed in 1957 as the Pampulha Museum of Art. Today it houses a 1,600-piece collection of contemporary artwork. 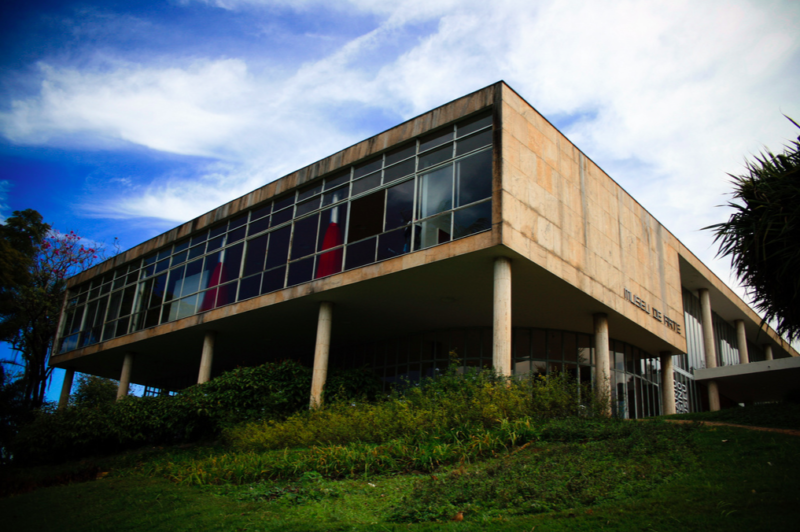 The Casino / Museum of Art at the Pampulha Essemble, in Belo Horizonte. Flickr – Image: Rodrigo Denúbila

The “Casa do Baile” (Ballroom) was originally created in 1943 on an artificial island as an event space, with a restaurant and a ballroom. Affected by the nearby casino closure that had given the Ensemble an air of excitement, the Ballroom shut down in 1948 and was repurposed several times until it became the Reference Center for Architecture, Urbanism, and Design in 2002. 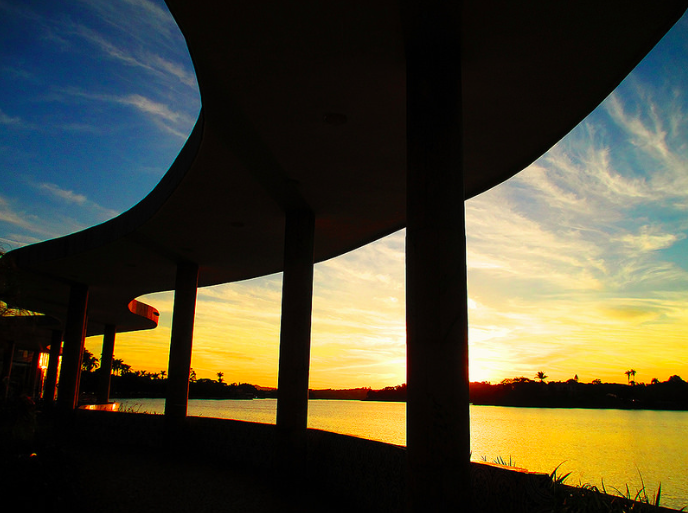 Modeled after a boat ready for entry into the water, the Tennis Yacht Club (originally known as the Golf Yacht Club) was built in 1942, and noticeably lacks the curvaceous features of the other buildings. The raison d'être behind its construction was to serve as a place of family fun and recreation, in addition to being the location for themed parties. 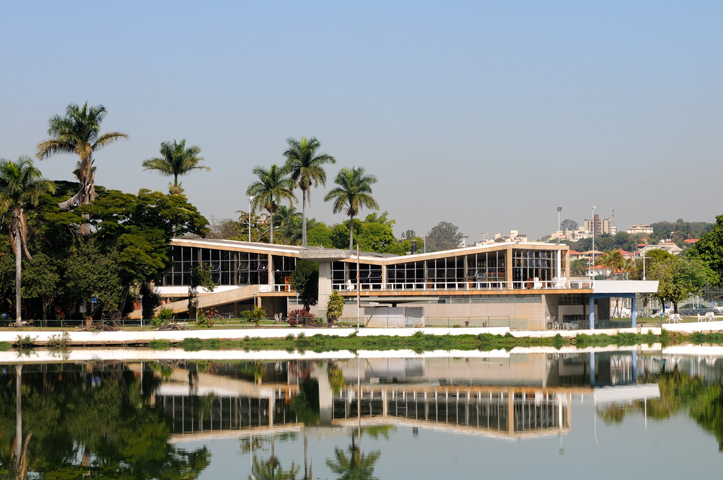 Pampulha, the Start of Brasília

Oscar Niemeyer, who passed away in 2012 at the age of 104, was best known for co-designing Brazil's capital, Brasília, in the mid-1950s. While the Pampulha Ensemble might become known throughout the world now that UNESCO has placed it in the spotlight, a lesser-known fact is that “Pampulha was the start of Brasília,” according to Niemeyer himself. To understand better what was meant by such a phrase, one must go back at least to the 1940s, if not to the late 1800s.

In 1897, Brazil as a republic was just nine years old, and the previous capital of Minas Gerais state, Ouro Preto, was not only highly associated with mining and the monarchy but it also held little hope for viable growth. This required the founding and inauguration of one of Brazil's first planned cities, Belo Horizonte, known at the time as Cidade de Minas.

Some four decades later, in 1940, the mayor of Belo Horizonte, Juscelino Kubitschek, decided to create a planned district within the mostly-unused northern region of the city. The idea was to find a way to cope with population growth, for which, ironically, the planned city had not planned.

For the task, he called upon a rising name in the world of architecture, the 33-year-old Oscar Niemeyer, to create the Pampulha Modern Ensemble. This was the young architect's first solo project, and it would become the catapult for, as well as precursor to, the creation of Brasília. When Belo Horizonte's former mayor became Brazil's 21st president in 1956, he knew whom to call when faced with the task of moving the country's capital from Rio de Janeiro to a more central location as Brazil started to expand westward. (The idea itself traces as far back as 1763.)

Thanks to the success of Pampulha, President Kubitschek (aka the Father of Modern Brazil) knew he could trust Niemeyer, if not merely for his view on integrating nature into his art, for which Niemeyer said the following:

It's not the right angle that attracts me, nor the straight line, hard, inflexible, created by man. What attracts me is the free and sensual curve, the curve I find in the mountains of my country, in the sinuous course of its rivers, in the waves of the sea, the body of a beloved woman. Curves make up the entire universe, the curved universe of Einstein.

In a practically unused part of his growing city, Juscelino Kubitschek, along with Oscar Niemeyer, never just saw what was actually there, but rather what could be—a feat both men would repeat more than a decade later in the country's new capital. Sadly, Kubitschek would die in a car accident in 1976 and wouldn't see his Belo Horizonte-born vision become a World Heritage site. The Pampulha Ensemble and Brasília—two of his biggest projects—would live on, however, much like the timeless architecture of his chief architect.

To hear the story of the Pampulha Ensemble straight from Niemeyer, be sure to check out this 23-minute short film (in Portuguese), titled “Pampulha—O Marco,” directed by Moacir de Oliveira.