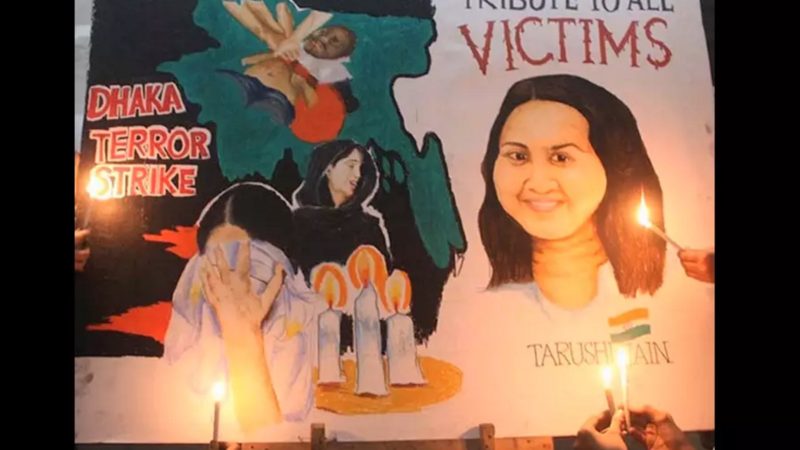 Police in Bangladesh have killed nine suspected militants and arrested one after a gun battle on 26 July. Authorities say many of the dead are young university students who were preparing a massive attack at their hideout in Kalyanpur, just five kilometers away from the prime minister's office in Dhaka.

The raid was part of an anti-terror drive after assailants took hostages in a cafe in the Gulshan area of Dhaka on 1 July, killing 20 people, and militants attacked police guarding the congregation at Sholakia, where the largest Eid prayers in Bangladesh were taking place, on 7 July, leaving three dead.

The brutal group ISIS, an Al Qaeda offshoot which has come to control large parts of Iraq and Syria, claimed responsibility for the Gulshan violence.

Around midnight on 26 July, police say they raided the block in Kalyanpur and faced resistance from those inside. They surrounded the house, and around 6 in the morning “Operation Storm 26” was carried out to end the stalemate.

Exiled writer and feminist Taslima Nasreen wrote on Facebook of the raid:

Police surrounded the terrorists. The young men were shouting to the police, “You may need bulletproof vests but we don't need them, because we are soldiers of Allah. If you are brave enough, lose your vests and face us. We will be martyrs and will go to heaven, we don't fear anything.”

The militants believe that they will go to heaven. So they do not hesitate to kill, or get killed.

‘Bangladesh is a curious case’

The police reported they found bombs, ammunition and two black ISIS flags. They said the militants destroyed their electronics devices, but the police were able to retrieve some photos of them posing in front of an ISIS flag in black clothing. The detained man, a student at Bogra's Government Shah Sultan College, claimed that he is an ISIS operative.

However, the police have claimed that they all are not from ISIS, but members of the banned local militant outfit Jamaat-ul Mujahideen, Bangladesh.

Over the past few years, Bangladesh has seen growing violence against mostly secular bloggers, outspoken critics of religious fundamentalism, members of religious minorities such as Hindus and Christians, police officers and some foreigners.

ISIS claimed responsibility for the July attack in Gulshan, as well as other recent attacks that have been escalating over the past few months, but the Bangladeshi government has denied that any international militant group operates in the country.

Home Minister Asaduzzaman Khan Kamal said the Gulshan cafe attackers were “all Bangladeshi and had no foreign connections.” However, the assailants were in communication with ISIS fighters in Syria and Iraq, sharing photographs of the killings that were then distributed by the group. According to the Site Intelligence Group, a company that monitors the online activity of extremist groups, a Bangladeshi ISIS fighter in Raqqah commended the Gulshan attack and threatened more violence.

Exiled journalist and blogger Tasneem Khalil wrote on his blog about the government's position:

What we have in Bangladesh is a curious case involving a terrorist group that publishes magazine articles to boast about its plans, while the government refuses to recognise the very existence of that terrorist group, and keeps on blaming the opposition parties for terrorist attacks.

The absurdity of this was captured in a recent article in Dabiq magazine (ISIS’ flagship English publication): “The [apostate] Bengali government will soon realize, by Allah’s permission, that shamelessly denying facts on the ground and playing childish blame games with the [apostate] opposition will be of no avail to them, as the Islamic State is indeed here to stay, inshā’allāh.”

According to Tasneem's analysis, ISIS has these goals: killing as many as possible in three target groups (foreigners, apostates and Hindus) and creating a “state of polarisation”.

‘You’re not religious but cowards’

After the Gulshan cafe siege, Bangladeshis were surprised to learn that the five assailants killed were from wealthy families, were good-looking and were exposed to Western education at home and abroad. Most of them ran away from their homes to join militant outfits and were reported missing by their parents, and some supposedly came to subscribe to violent ideologies while attending private universities.

One of the suspected militants killed in Kalyanpur was a US citizen and the son of a Bangladeshi millionaire who also had run away from home.

The Rapid Action Battalion has published a list of about 200 individuals who were reported missing over the last year and a half and who are feared to have dangerous motives for doing so. The people in the list range from politicians to businessman, from former civil and military officials to schoolteachers, and from masons to garment workers. Some of the missing men were traced to flying abroad to Malaysia and Turkey and then their trail mysteriously disappears.

The police have been largely ineffective in their earlier investigations of the killings of bloggers and critics of religious fundamentalism. A recent news report stated that in last five years, around five hundred suspected militants were granted bail, and some of them have continued down the path toward violence.

They first murdered the bloggers, learned how to kill practically. Then they killed foreigners and Hindu priests with guerrilla tactics where they could kill and escape. Then they undertook the Gulshan attack and the Sholakia attack. You are next, respected politicians, maybe soon.

Meanwhile, Bangladeshis have strong words for people who wish to do their countrymen and women harm. A video posted on Vimeo shows several Bangladeshis criticizing ISIS and promising their country will not succumb to the group's violence:

To Islamic State and Al-Qaeda members in Bangladesh: You are cowards. Religion could not make you human beings. You’re not religious but cowards. […]

You escape after your every secret attacks because you don’t have enough courage to say something openly, you don’t have any logics. Because you know very well that public will kill you if they identify you. Do you think that you can impress youths by your cowardice act and they will join you? The youths are preparing to destroy you for forever. […]

Even if all of you come from around the world can’t do anything to this country. You won’t find a way to escape. Bangladesh doesn’t know how to lose!