A Chinese Communist Party Ad Asks: ‘Who Am I?’ Social Media Responds: ‘Corrupt.’ 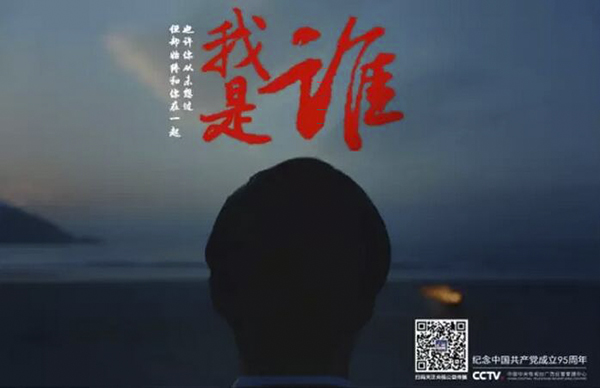 China Central Television's poster: Who am I?

This post was written by Gene Lin and originally published on Hong Kong Free Press on July 27, 2016. An edited version below is published on Global Voices as part of a partnership agreement.

The Communist Party of China launched its first advertisement to celebrate its 95th anniversary. The video, titled as “Who am I?” was produced by the state-run China Central Television and has been vigorously promoted via both conventional and online media outlets.

Other featured figures are a medical surgeon, police officer, dock worker and village-level party secretary. The concluding message is: “We are the Communist Party of China. We are always with you.”

State-affiliated media outlets and pro-government bloggers circulated the video on major social media platforms with short introductory remarks on July 27, such as the following:

Dear friends, have you noticed that our party has recently started issuing advertisements? Lets understand more about the [communist] party and make more contributions to it and to the country.

Some, however, weren't a fan of the advertisement. A blogger pointed out:

Advertising is a double edged sword… If the party cannot accomplish what it promises in the advertisement, then the party would put itself to shame.

Indeed, netizens started addressing the question “Who am I?” and the answers weren't always kind to the Chinese Communist Party:

You are [disgraced politicians] Zhou Yongkang, you are Bo Xilai, you are Guo Boxiong, you are Xu Caihou, you are Ling Jihua, you are the numerous hidden in the background.

Of course, these comments were quickly deleted, either taken down by censors or by their authors in an act of self-censorship.

The advertisement seems to be an attempt to re-establish party members in the eyes of Chinese as people's servants as opposed to privileged and corrupt ruling elites, an impression illustrated by the popular phrase “the Zhao family,” which first made an appearance around end of 2015.

The phrase comes from the novel “The True Story of Ah Q” by prominent Chinese author Lu Xun (1881-1936) and captures the relationship between “them” vs. “us.” Chinese netizens use the phrase to explain the power imbalance in current mainland Chinese society in which the private interests of “Zhao,” representing the Chinese Communist Party, override everything else. The term has been banned online since early January 2016.

Under Chinese Communist Party rules, media outlets should serve as the party's mouthpiece. The presentation of political propaganda in advertisement form is something new. The ad itself includes a lot of the emotional and sensational elements found in political ads from democratic societies during election time.

According to state-affiliated news outlet, the Paper‘s >report, this advertisement was filmed in Shanghai within three days, and the entire production took 20 days to complete. The next ad for celebrating the 95th anniversary of the party is titled “The Heart Beats.” The narrator will be an old soldier from the People's Liberation Army.