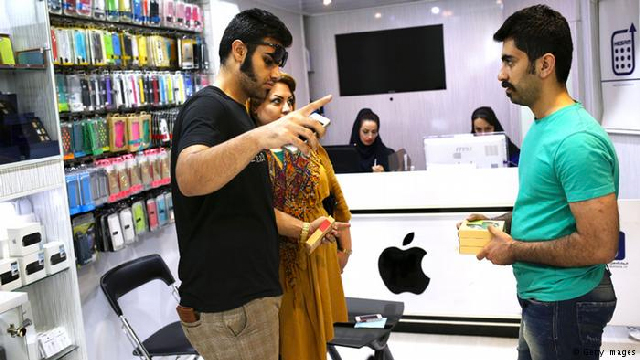 Iranians visiting an unofficial Apple vendor in Tehran. Image taken from ICHRI and used with permission.

Officials in Tehran have told Apple that it must open an office in Iran or face a nationwide ban on all Apple products. The ultimatum, officials say, is intended to capture lost tax revenue on the millions of iPhones smuggled into the country every year, but experts say the real goal is to weaken US sanctions that currently restrict investment flows into Iran.

“If [Apple] does not register an official representative office in Iran, all phones produced by this company will be confiscated from stores,” said Abbas Nakhaei, the head of Iran's Anti-Smuggling Task Force, in an interview with the hardline Tasnim News Agency on July 17, 2016.

Bringing Apple officially into the country would be a huge victory for Iran, which has argued that the benefits of signing the nuclear deal and the easing of international sanctions have not brought the expected foreign investment into the country.

Iran is able to sell its oil internationally and non-American companies are now free to set up shop in the country, but US companies (including some businesses in high demand) are still effectively banned from operating in Iran, due to remaining sanctions that Washington has kept in place against the Islamic Republic.

With their ultimatum to Apple, Iranian officials ostensibly want to end the country's massive iPhone smuggling industry, which deprives the government of much-needed tax revenue. There are an estimated 6 million active iPhone users in Iran, according to a July 20, 2016, report in the newspaper Donya-e-Eghtesad, though most of these phones were smuggled in from Dubai.

The ultimatum's larger goal, experts believe, is to break down barriers erected by US sanctions against Iran. If Apple can be pressured to establish an office on Iranian soil, the company would be forced to resolve the technical and legal issues currently preventing its (and other businesses’) operations in the country. Tehran appears to be confident that other companies will follow Apple's lead. By targeting Apple, the Islamic Republic is trying to force open the door for other US companies to enter the Iranian market.

Apple may be unlikely to comply, at least in the near term, and it would be surprising if it were to risk the legal and financial repercussions of violating American sanctions without first discussing the matter thoroughly with US officials.

In addition to the ultimatum to Apple, Iran’s Anti-Smuggling Task Force said all iPhone users in Iran must register their phones within the next few weeks. Every mobile phone has a unique International Mobile Equipment Identity (IMEI) number. If iPhone owners do not register that number by September 22, 2016, the authorities say they would cut service to the devices. Retailers are also being required to register all new iPhones.

“Retail stores are not permitted to sell any brand that has not been registered with the Industries, Mines, and Trade Ministry [If they sell unregistered phones] they will be dealt with,” said Karimi Khorasani, the chairman of the Telecommunication Retailers Union, on July 21, 2016.

Iranian policymakers advocating these new measures find themselves at odds, however, with the law-enforcement officials who will be charged with implementing the new regulations.

On July 23, 2016, the head of the Communication Ministry’s Public Relations and Information department announced a delay in registering mobile phones, due to a lack of preparation. On July 25, however, Ghassem Khorshidi, the spokesperson for Iran’s Anti Smuggling Headquarters, announced that a trial implementation was already underway with a select number of users.

A decade ago, in 2006, the government already tried once to force all people with mobile phones to register their devices with the state, in order to combat smuggling. The effort failed, however, “because mobile operators refused to cooperate,” according to Alireza Golestani deputy chairman of Central Taskforce to Combat Smuggling of Commodities and Foreign Exchange, on October 30, 2015.

An Apple retailer in Tehran who asked not to be identified told the International Campaign for Human Rights in Iran that iPhones are selling for about 10 percent more, since Iranian officials threatened to crack down on Apple products.