In Jalisco, located in western Mexico, the state Congress oversaw a historic session on July 14, 2016, when they approved the removal of the fuero, a law that offers constitutional protections to the political class and government employees, preventing them from being prosecuted for crimes while still in office. The approved reform would take this political privilege away from 1,598 public employees, including the governor.

To be enacted, the constitutional reform needs the support of at least 63 of the 125 city councils in Jalisco. Whatever happens with the city councils, the Jalisco Congress’ unanimous endorsement is being widely described as a milestone in the fight against political impunity and corruption.

Getting rid of the #Fuero in Jalisco, 1st big step. Other state legislators and the unpunished answer now.

In a press release, the Jalisco Congress stated:

The fuero has been used and abused in excess, so citizens consider it a symbol of corruption, impunity, arrogance, and privilege.

The independent Senator Pedro Kumamoto was one of the main promoters of the constitutional reform, since April when he presented an initiative to eliminate the law and civilianize political proceedings.

Another Way of Doing Politics

It's worth mentioning that, thanks to the political reform of 2014 that laid down the rules for independent candidates at local and federal levels, Pedro Kumamoto was the first independents to become a senator without the backing of a political party. His candidacy arose as part of the innovative political project Wikipolítica. Rodrigo Cornejo, Wikipolítica's Jalisco coordinator, said in an interview with MediaZoom:

The wiki way of doing politics is, as the name implies, quick and without obstacles, and is rooted in the automatic organization of independent groups (nodes) and the establishment of online and offline methods of communication.

As shown in the following video that formed part of the electoral campaign of Kumamoto, Wikipolítica maintains that people must be at the center of democracy, and that they are the “motor and reason for institutions”. With that in mind, the campaign pointed out:

It has now started. No one better than us, the people and not the parties, to turn politics into the seed of assembly. We are the cracks in the wall that is going to fall. The traditional parties, the favoritism, and the circles of power will start to come down if you join. We will occupy the government.

I am Pedro, one of the occupants, and I am the first independent candidate for the local Congress in the history of our state. I am sure that I am not alone. We are already thousands and every day we are more.

The Wikipolítica project, with Pedro Kumamoto as its chief spokesperson, has benefitted from the participation of citizens, dialogue, and collective intelligence, receiving a large backing from various segments of Jalisciense society. Their initiative #FueroNoJuicioSí (Impunity No, Judgement Yes), for example, had the support of diverse groups like Ciudad Pixel, who created the web site FueroNo.Org to help with the dissemination of the project and to promote participation through the use of social media and digital formats.

Are you tired of congressmen who use threats and get away with anything?
Are you tired that first-class governments and second-class citizens exist?
Go to fueron.org and pressure congressmen to back this initiative.

In this way, a little more than a year after Pedro Kumamoto started his term as senator from the 10th district of Zapopan, and with the removal of the fuero from the political class in Jalisco, it is possible to celebrate several triumphs from and for citizens and confirm that #LosMurosSíCaen (The Walls Will Fall). 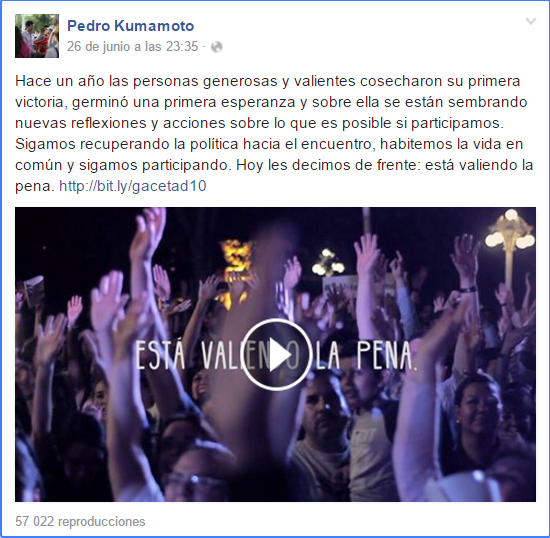 “Waiting A Year is Worth It”. Video from the Facebook page of Pedro Kumamoto.

A year ago, generous and brave people harvested their first victory, a first glimpse of hope started to bloom, and on it new thoughts and actions about what's possible are being sowed, if we participate. Let's keep reclaiming politics to reunion, let's inhabit life in common, and let's continue getting involved. Today, we tell you, eye to eye: it's been worth it.

All information and updates from the political team of Kumamoto are available via Twitter and on their website. To keep informed about Wikipolítica in Baja California Sur, Mexico City, and Jalisco, consult their social networks.