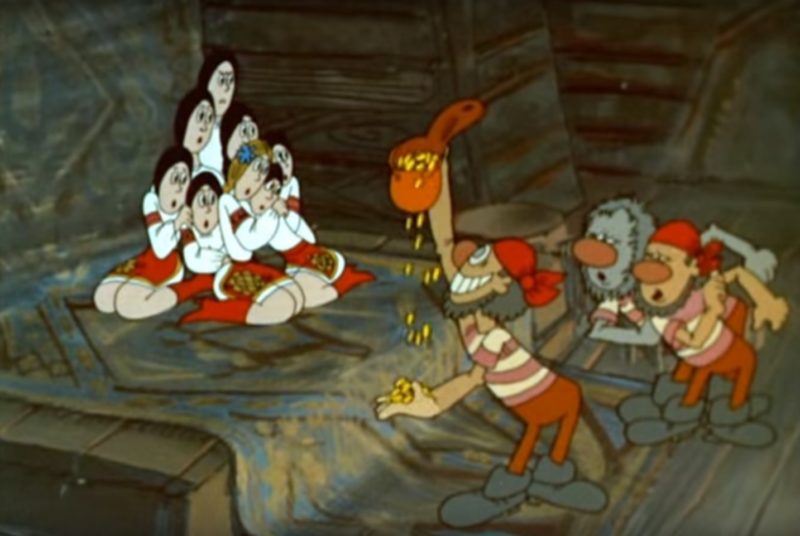 Screen shot from “How the Cossacks Rescued Their Fiances” (1973).

‘Traditional’ bondage in Mauritania; forced prostitution in Europe; and bride kidnapping in Kyrgyzstan. In 2016, an estimated 45.8 million were subjected to some form of slavery in 167 countries, according to the Global Slavery Index.

Even though slavery continues to plague us, discussions about human trafficking or slavery are seldom part of mainstream public discourse, and rarely do these conversations cater to children.

But an episode from a classic Ukrainian cartoon series broke taboos around addressing human trafficking as early as 1973. And now thanks to YouTube, almost half a century later, “How the Cossacks Rescued Their Fiancees” (Как казаки невест выручали), from the “How the Cossacks..” series, is making a global comeback. Single episodes of the series, uploaded to the video streaming site, have received as many as a million views.

The episode on human trafficking has been viewed more than 500K times and intertwines folklore and social commentary in a way that can be used as a conversation starter about the broad area of kidnapping and slavery.

This episode is a little over 17 minutes long, but well worth your time, as the director Vladimir Dahno combined classic animation techniques with a hilarious storyline and an excellent musical score. This episode follows three Cossacks who pursues a gang of girl-kidnapping pirates through various countries, which include satirically stereotyped depictions of Greece, Egypt and India. The use of dialogue is minimal, making this episode accessible to worldwide audiences of all ages.