With Trepidation and Excitement, Pokémon Go Finally Launched in Japan 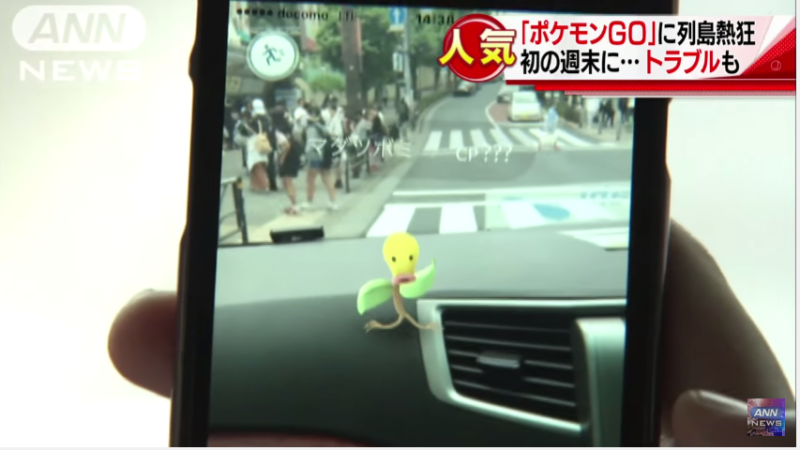 Playing Pokémon Go while driving a car in Japan. Caption: “POPULAR — On the first weekend after its release, Pokémon Go fever sweeps the Japanese archipelago, along with problems. Screencap from ANN official YouTube channel.

After a viral launch in the US and most of the world, the Pokémon Go mobile augmented reality game finally launched in the birth place of its Pokémon characters: Japan.

The game, which Apple confirmed has broken its App Store record for downloads in the first week of release, is generating massive excitement from players and some businesses in Japan, and causing trepidation from others, who fear the game will disrupt their lives.

The game launched five days behind schedule in Japan on Friday, July 22 2016. Reportedly, the delay was stoked by fears that Japanese Pokémon Go servers wouldn't be powerful enough to cope with demand, after a leaked email revealed the locations where Pokémon was launching.

Pokémon Go is a free-to-play, location-based augmented reality game that was first launched in most of the world on July 6, 2016. Developed by Niantic Labs, players use a mobile device, connected to the internet to find and capture Pokémon characters in real-world settings.

The Pokémon franchise was created in 1995 by Japanese video game designer Satoshi Tajiri. Pokémon Go is based on the Pokémon multimedia juggernaut of anime and video games that first became popular in the late 1990s, where human players must find, capture and battle with fictional creatures called Pokémon, known as ‘Monster Balls’ in Japan.

The Friday, July 22 release in Japan resulted in immediate, widespread interest all over the country.

I heard that Pikachu could be caught in Shinjuku Gyoen National Garden [a popular park in central Tokyo], but there is just a huuuuuuge crush of people here.

Whenever a particular location became known as a hot spot for capturing rare and coveted Pokémon characters, it would become quickly overrun.

There is just an incredible amount of people in the park on the west side of Ikebukuro Station [in central Tokyo].

Neighbouring businesses also stand to benefit from the craze:

After Maizuru Park in Nagoya has developed the reputation as the “holy land” of Pokémon Go, people have flooded into this convenience store, literally cleaning off the shelves.

Thanks to the mobile, ubiquitous nature of the game, Pokémon characters can be encountered almost anywhere where there is a GPS signal.

“Casey” is taking the train like the rest of us.

Other PoGo players in Japan have noticed that where you play the game makes a big difference in terms of how many of the creatures you might actually be able to catch:

Playing Pokemon Go in the countryside versus Shibuya. pic.twitter.com/PB2QRJg7Mu

Syrian artist's  @KhaledAkil viral images that have been using Pokémon Go images in July to raise awareness of the war in Syria have also been widely shared in Japan since the game launched on Friday.

Just like in other countries around the world, there are some people that regard the massive popularity of Pokémon Go with alarm. Some religious sites in Japan such Izumo Shrine have banned the game.

On the other hand, Pokémon Go seems to be creating some absurd situations at other religious sites. One player noticed a very odd sort of Pokémon to be found at Yasukuni Shrine, which is devoted in part to memorializing Japan's World War II dead: