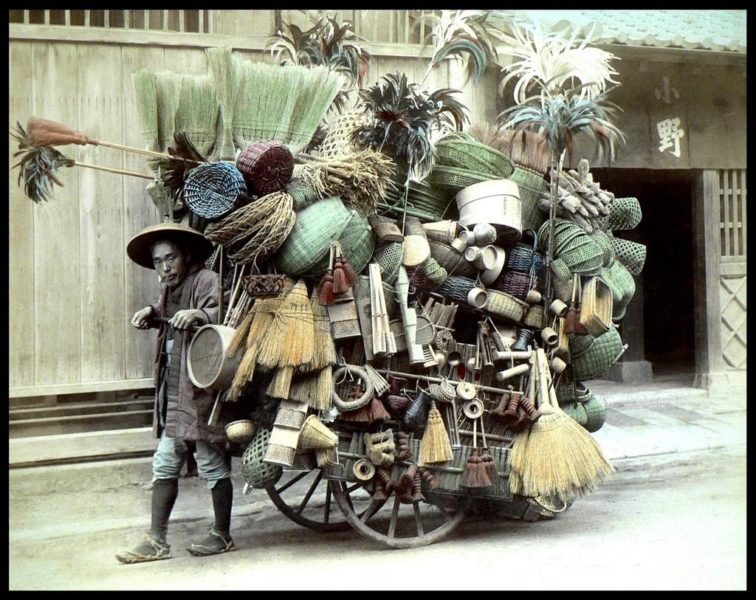 Prolific Flickr user Okinawa Soba has posted a large collection of restored and colorized images he says were “found amongst boxes of junk that are otherwise wasting away in a dark corner of my room.” In reality, Okinawa Soba (a Flickr handle used by ‘Rob’, an American resident of Okinawa) has scoured second-hand shops and antique markets to find prints of pioneering Japanese photographer T. Enami.

Hundreds of restored T. Enami prints are available in 20 collections of photos on Okinawa Soba's Flickr profile; in fact, the collection is so large that he recommends starting out by looking through the photos and descriptions at a sister site, www.t-enami.org/services. The photos depict postcard scenes and 3D stereoscopic images from the Meiji Era of the late 19th century to the Taisho Era of the 1920s. Stereoscopy is a technique used to create a three-dimensional effect with an image, generating the illusion of depth to a flat image. There is even a collection devoted to T. Enami himself, and his studio. 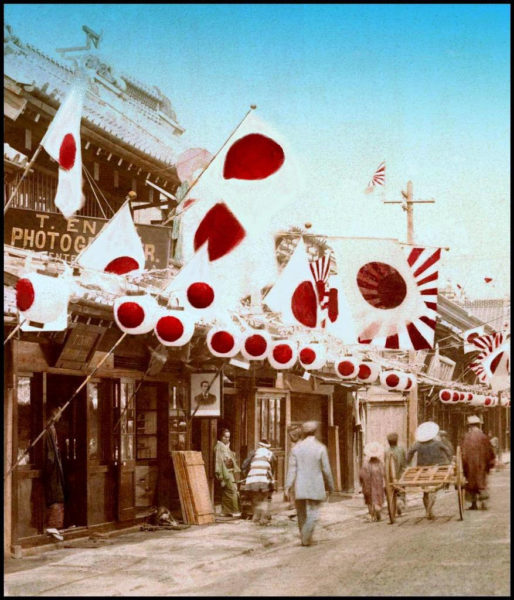 T. Enami started practicing photography in Japan in the final decades of the 19th century. Japan had just been “opened up” to the west following the “bakumatsu”, or end of the Edo Period, in 1868. 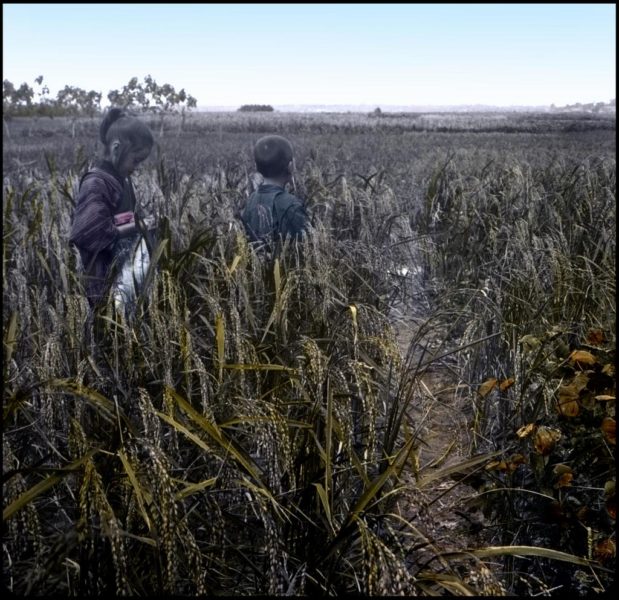 There was a deep fascination with Japan in countries all over the world, which fueled demand for the prints and images that allowed T. Enami to make a living. 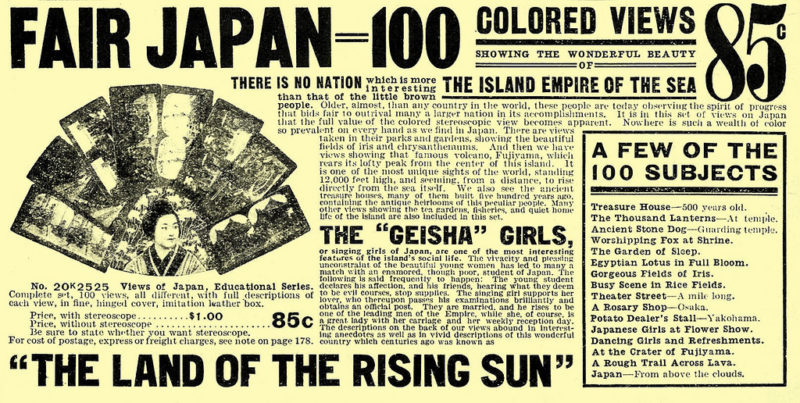 According T. Enami (T probably stood for Toshi), was the ‘trade name’, or ‘artist name’ of Enami Nobukuni (江南 信國).

Why didn't he use his real name ? I don't know. Go ask Mark Twain, er, I mean Samuel Clemens.

In any case, and by any name, Enami was truly a ‘photographers photographer’ who in his youthful 20s was a student and assistant to K. Ogawa, and a hard-working professional until he died at age 70 in 1929. […]

It's amazing to me that a man born in 1859 during the old Edo-Bakumatsu period of Japan—and who probably wore the classic ‘top-knot’ as a youngster—would go on to become a credited, contributing photographer to National Geographic Magazine during his lifetime…and a whole lot more than that as well.

Soba laments that Enami has not received the same recognition awarded to his contemporaries:

Although still not (yet) considered by ‘scholars’ to be one of the illustrious ‘Rat Pack’ of early Japanese commercial photographers that included Shimooka, Ueno, Kimbei, K. Ogawa, Suzuki, Esake, Tamamura and others, the body of T. Enami's work is never-the-less filled with valuable and instructive examples of early photography that — for better or worse — provide a practical window into the highly competitive world of Japan's Meiji-era studios.

Okinawa has uploaded an extensive collection of T. Enami's stereoscopic images of scenes from all over Japan, including members of an indigenous Ainu community on the northeast island of Hokkaido. 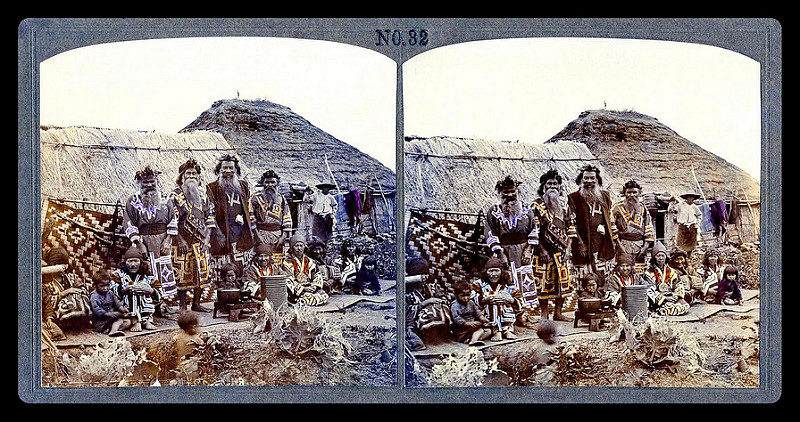 Apparently, T. Enami was also employed by the Japanese government, and took photos of Japanese expeditionary forces abroad. According to Okinawa Soba:

Enami served his country in 1904-05 as an Imperial Army war photographer. He traveled widely in all theaters of the war, photographing subjects in China, Korea, and on the Japanese home-front.

T. Enami continued with his photography into the Taisho Era of the 1910s and 1920s. His style transformed from taking carefully staged photographs suitable for postcards, to more realistic “street photography” scenes. 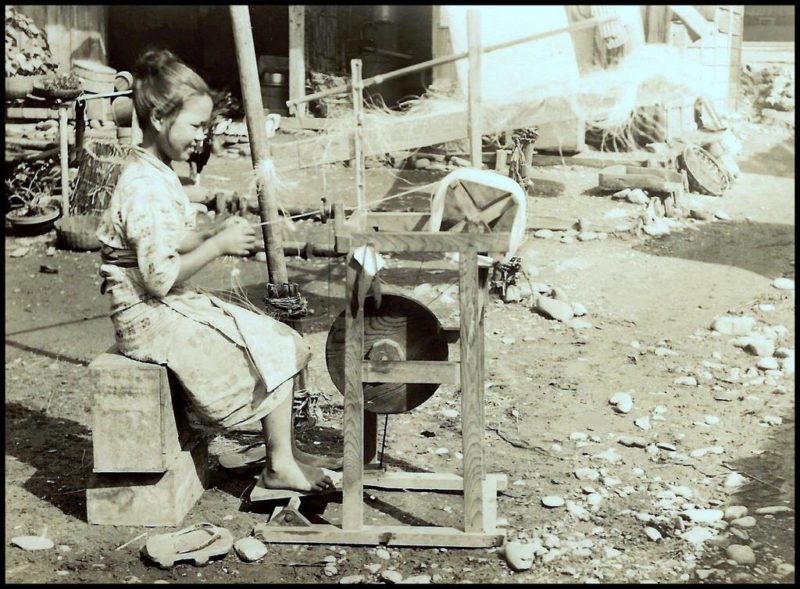 Okinawa Soba reports that during T. Enami's career, his prints were republished around the world in illustrated publications and guidebooks about Japan; Enami even received special recognition by the Japanese government for his images. The legendary photographer is now known for three separate series of numbered views: ca.1892-99 Large Albumen Prints, ca.1900-07 Stereoviews, and ca.1912-16 Street Photography. However, Okinawa Soba says that only printed catalogs for the first two series have been re-discovered so far.

T. Enami's Yokohama studio was reportedly destroyed in the 1923 Great Kanto earthquake. The photographer died in 1929 at the age of 70 and his surviving image transparencies were entrusted to his son. 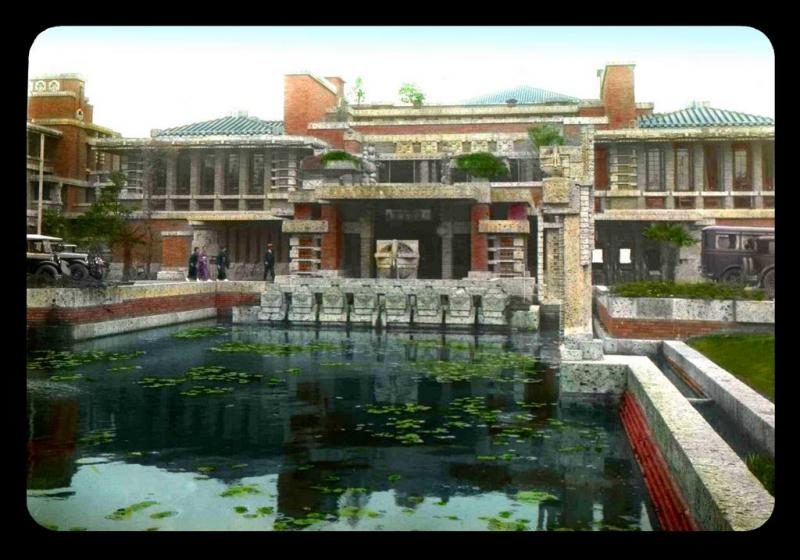 In his Flickr album Processing, Printing, and Conservation, Okinawa Soba, the photography enthusiast who remains so passionate about Enami's legacy, actually reveals a bit about himself:

Okinawa Soba is an old ‘Darkroom Guy’. I have an interest in exposure times, negative and print development, and image conservation — things that must be considered even before you take the picture.