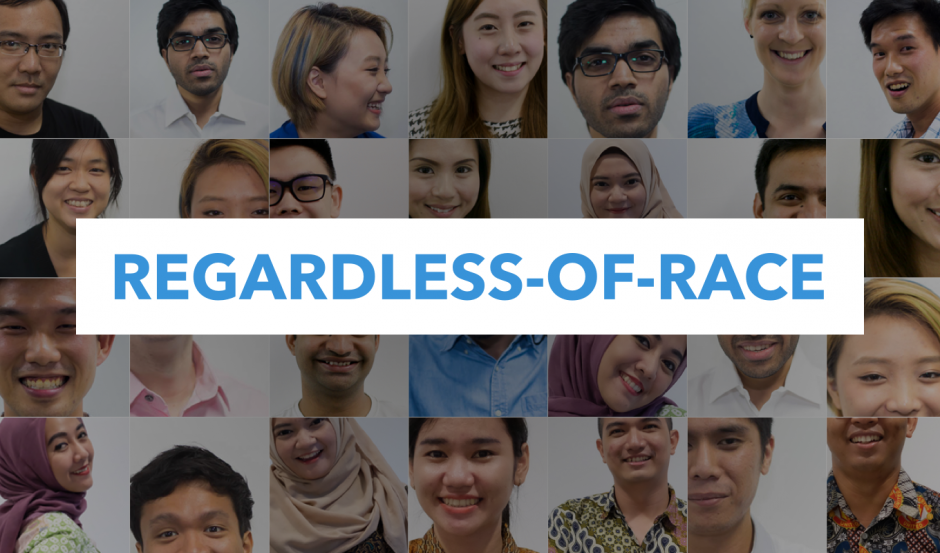 Take the pledge. ‘Regardless of Race’ campaign. Photo from 99.co

An Internet entrepreneur has launched a campaign to fight “rental racial discrimination” in Singapore after being rejected by some property owners just because his wife is Indian.

Darius Cheung, founder of property listing website 99.co, wrote about how his search for an apartment made him realize the prevalence of racism in Singapore. He narrated how some property agents and landlords lost interest in dealing with him after learning that his pregnant wife is originally from India.

He is married to Indian-Singaporean Roshni Mahtani, an entrepreneur who founded the parenting website theAsianparent.

At first, Darius was surprised that some agents were not responding to his inquiries. One agent gave a vague reply: “Profile doesn’t match”. After asking the agent to elaborate, he got this answer:

Sorry your wife is Indian, landlord won’t rent to you. Next time please indicate earlier, so we both don’t waste time.

Darius said the experience confirmed the existence of racism in Singapore:

I understand the idea of discrimination intellectually and recognise that it exists, but it was not until this moment that I caught a glimpse of what it actually means to be discriminated against.

Singapore has an ethnically diverse population and boasts of having a government that promotes racial harmony. However, racial tension has intensified in recent years, which some ultranationalist groups are blaming on the arrival of foreign workers.

Worried about the future of his child, Darius has vowed to fight racial discrimination. His company unveiled a new feature on its website called “All-races-welcome” which provides agents or landlords with incentives if they indicate that their rental listings are open to all “regardless of race”:

Agents and landlords can now positively indicate that their rental listings can be listed to be open for all, regardless of their ethnicity, background or nationality. These listings will then be prominently featured on the 99.co homepage to prospective renters. The idea is to give renters peace of mind during their home search journey – reducing instances of rude comments and unpleasant experiences while enquiring about listings.

Darius is hoping his campaign will inspire more people to take a pledge against racism.

Our hope is that as more and more agents put up ‘All-races-welcome’ listings, it will build momentum to create a more inclusive rental market and landlords will start to realise that it is not just socially unacceptable to discriminate, but also economically unviable.

What we *really* need is comprehensive anti-discrimination legislation, but recognition from a rental site is a start.