Azerbaijan and Turkey: Caught in a Bad Bromance

When it comes to the spat between Turkish leader Recep Tayyip Erdogan and his one-time ally-turned mortal rival Fethullah Gulen, Azerbaijan's President Ilham Aliyev long ago decided it was best to observe the rule that my best friend's enemy is my enemy, too.

And following a coup attempt in Turkey on July 15 that Erdogan argues Gulen organised, this means the days of Gulen-linked institutions in Azerbaijan are effectively finished.

The gradual phasing out of organisations inspired by the controversial Islamic theoretician and educator in the South Caucasus country began at least two years ago, after once-friendly relations between Gulen and Erdogan suddenly soured dramatically.

Erdogan has accused the Pennsylvania-based Gulen — not without some evidence — of amassing and directing loyalists in the country's government, and even attempting to bring down his rule.

In 2014 when Erdogan went to Azerbaijan to visit President Ilham Aliyev, Azerbaijan promptly shut down a network of schools linked to Gulen that were regarded as some of the best in the country.

After reportedly conferring with ally Erdogan, Aliyev decided to announce the closure of one of the country's few remaining bribe-free education establishments, the Caucasus University, which was founded by adherents of Gulen.

Azerbaijan closed Caucasus University with reported links to Gulen movement. The university was one of the best in the country.

As a result, Azerbaijan, where quality of education is declining almost as steeply as academic freedoms, no longer has any Gulen-affiliated education establishments at all.

One Azerbaijani scholar posted his take on the situation:

Altay Göyüşov: Erdogan calls Aliyev and tells him to shut down Caucasus University. To which Aliyev responds by saying, this university is one of the few remaining good universities, what would the people say? But Erdogan says, I don't care…

Aliyev did Erdogan another favour when the government took off air for a period of a month a TV station Azerbaijan News Service (ANS) that aired an interview with Gulen.

Finally, an online newspaper Zaman Azerbaijan which was (like a large part of Turkey's blacklisted media) heavily linked to Gulen announced its decision to shutter itself on July 20.

According to the statement, the newspaper decided dissolve itself following the recent developments in the region and “possible impact on the friendship and brotherhood between Azerbaijan and Turkey.” 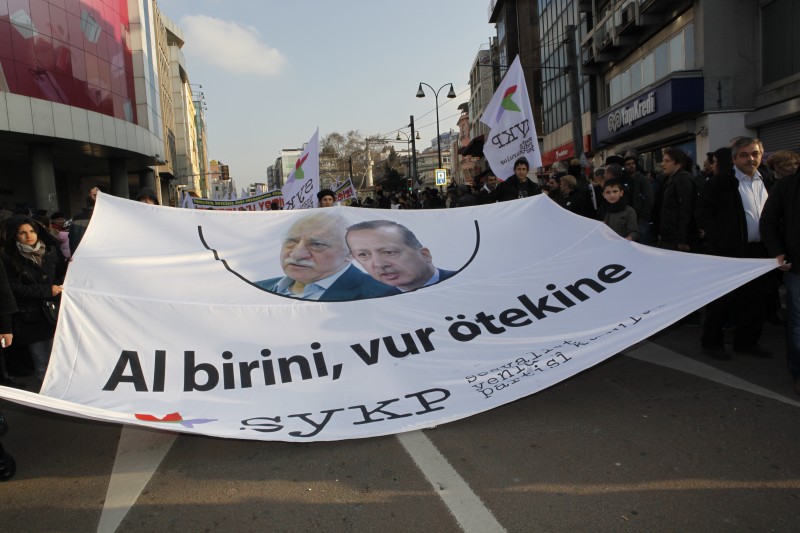 In Istanbul in 2014 a banner with Fethullah Gulen (left) and Erdogan's pictures reads “one is no better than the other”. Protesters rally to protest against corruption and planned construction projects. Demotix photo taken by Fulya Atalay. ID 3553279.

Many have raised eyebrows at the idea of a newspaper that existed for years voluntarily closing itself down.

With its already imperilled domestic media and education scene now further weakened by the fallout coup attempt — which, incidentally Gulen's representatives have denied involvement in– did Azerbaijan get anything in return?

Only time will tell.

But if Gulenists in Azerbaijan are having a difficult life, it is nothing compared to what people suspected of being members of their movement are going through in Turkey.

In the week following the failed military coup attempt:

At least 59,644: # of people detained, removed from their jobs or stripped of professional licenses so far #TurkeyCoup #TurkeyPurge

Through his philosophical writings and the work of his Hizmet movement the reclusive Fethullah Gulen has presented himself as a bridge between Islam and secular democracy.

Schools influenced by his work — up to a 1,000 worldwide teaching a secular curriculum including many in America — have suffered collateral damage from his fallout with Erdogan, believed to be in 2013.

Prior to their disagreement, which is well-explained in this Al-Monitor blog written by Mustafa Akyol, Gulen and Erdogan's AKP government worked together to reform the Turkish state in their own image.

But with Turkey requesting Gulen's extradition from the United States to face trial for a number of serious offences, those days are long gone, and other countries will face diplomatic pressure from Ankara to close institutions loyal to his ideas.

Few are likely to cave as quickly and willingly as Azerbaijan did, however.